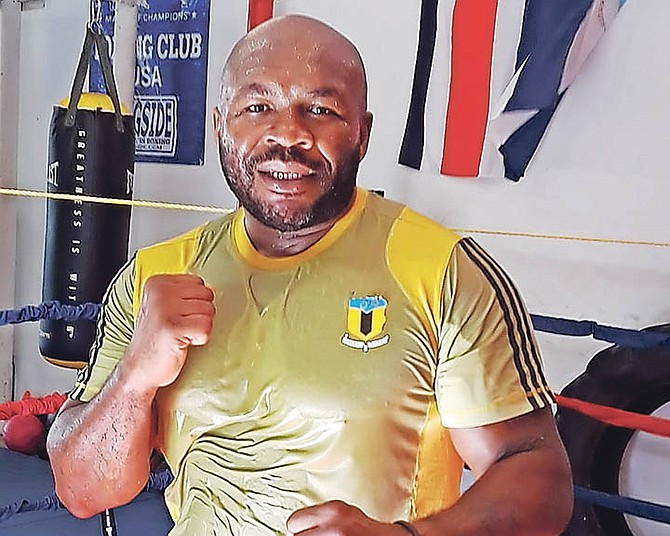 THE main event of Backyard Rumble - Part II ended prematurely, much to the chagrin of fight fans.

Bahamian heavyweight Sherman “Tank” Williams was awarded a win by technical knockout just 30 seconds into his bout against Stacey Frazier of the United States.

Just days prior to the fight, Williams learned that Frazier would replace his original opponent, Orlando “Knockout” Farias of Argentina, due to another apparent hand injury.

Hosted by Bahamian Sons Sports and Entertainment, the event featured several bouts between local fighters and visitors from Jamaica.

Tyrone Oliver continues to set his course as a rising star in the sport and improved to 2-0 after his first round stoppage over Tureano Nicols of Jamaica.

In 2013, Williams 46, got into promotions with Bahamian Sons and having gone through the process as a boxer, he’s following in the footsteps of a number of professional boxers who control their own destiny to provide the options and the opportunities that they had. They hosted their first event last year in Grand Bahama. “I think this is going to be the beginning of something new, not only here in Nassau, but throughout the Bahamas. I think we have the ability with all this local talent to produce some regular local programming and sports entertainment and to get all of the islands familiar with the fighters again.”

He said the Bahamas always had the “goods,” but it’s all about building a solid platform for them to harness their professional skills in their own backyard. “I expect these events to have a massive effect and I feel that it is my obligation and duty to create a platform for the fighters coming after me,” he said, “The talent is here, not everyone wants to run track and play basketball I just want ppl to embrace this talent we have out there.”