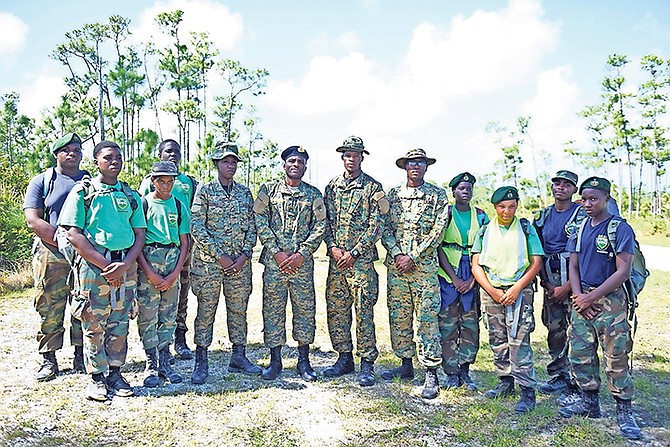 Defence Force Marines after their rescue of a 53-year-old man who attempted to commit suicide. Photo: Shawn Hanna/Tribune staff

Officers from the Royal Bahamas Defence Force prevented the suicide attempt of a 53-year-old man over the weekend.

Marines Michael Gibson, Cyral Davis and Alexis Strachan were at a security checkpoint on Cowpen Road around 10am on Saturday when a man’s unusual behaviour sent them scrambling to save his life. They were waiting for youth participants in the Governor General’s Youth Award (GGYA) programme to reach the checkpoint during their 30-mile hike. Able Seaman Gibson said: “We witnessed an individual coming from the southern side with a belt around his neck. One of my comrades said: ‘Something has to be wrong’. The man looked at us; he said ‘hi’, then he said ‘bye’ as if to say this is his last goodbye. He walked towards the bushes.

“When I saw that I turned the bus on and started to approach him. He ran up the tree. Marine Seaman Davis hopped out of the bus. By the time Davis got out of the bus (the man) had already tied the knot on top of the limb, stepped off and was hanging. Davis tried to lift him from the bottom to relieve the pressure on his neck.”

Two young cadets with the RBDF Rangers programme were on the bus at the time and helped the marines.

“One of the Ranger cadets attempted to climb the tree to lift the gentlemen’s body to relieve pressure from his neck,” AB Gibson said. “I had a knife on me so I climbed the tree and cut the belt loose. The man dropped and was unconscious. Davis caught him. We lifted him to the side of the street. He was out for a minute or so. We poured water on him, tried to bring him back. When he did come back, he was in tears. Everything happened really fast.”

The man said nothing, marines said, only nodded to paramedics and police officers that responded to the scene.

“To me, he looked like he came with a plan and tried to execute that plan but was upset to have failed,” Marine Seaman Davis said.

High schoolers in the Rangers cadet programme were travelling nearby when the suicidal man was saved.

“I’m glad we got him down so the kids that were coming didn’t witness someone hanging from the tree,” said AB Gibson.

“These marines exemplify what the Royal Bahamas Defence Force is all about,” he said. “They’re trained to be observant and so we are happy they were able to step in and save a life.”

There have been two suspected suicides so far this year. Those who need help are asked to contact the National Suicide Hotline at 242-322-2763 or the Bahamas Crisis Centre at 242-328-0922.

Good job. Trust this poor man will find good things to live for, even in this tough world of ours and will receive appropriate counselling, if the PHA can afford it...........

Or he will simply try again, hope and pray some counselling will turn him around and give him hope and reasons to live

Hope they took him to Sandilands or one of the local experts ........... for counselling

"We poured water on him, tried to bring him back."

Are these marines trained in first aid and CPR, because no where in the CPR manual indicates to pour water to revive an unconscious person.

/just asking for a friend

Must you? Lol. Well..it werk... :- from now on whenever I have to revive someone I'm pouring water on them