Face To Face: A Zest For Life Which Has Never Been Broken 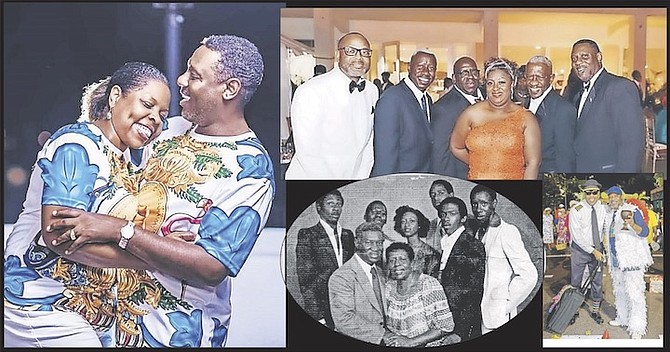 Clockwise, from left: Paul and his wife, Porcia: the Fernander children today; Paul rushing with Sting Junkanoo group; Dennis and Rosie Fernander and their children.

One cannot meet a person like Paul Fernander and forget him. His effervescent smile, big personality, booming voice and “get it done” attitude speaks volumes. He is a veteran in sales in media, but he also has in-depth knowledge in broadcasting that allows him to liaise effectively between the client and the media and production personalities. Not only that, Paul cares about people. He will take the time to ask you about yourself, will remember what you told him and on the next occasion he sees you and strike up a conversation right where you left off. His infectious personality makes him relatable and memorable.

I have known Paul for many years. We worked together at the Broadcasting Corporation of The Bahamas and at More 94.9fm; I worked as a radio and television reporter. More 94.9fm is a private, smaller entity than the BCB; therefore, under the directorship of Galen Saunders, I learned to take on other tasks, including leading radio remotes and producing programmes. So I had many opportunities to work directly with Paul and see his vigour for his craft first hand. Recently, I saw Paul and he was walking with a limp. He seemed much weaker, but was still flashing that big smile. I asked him what happened, and he was like “I was in a terrible car crash!” I was in shock, and then he said, “No, no… I had a stroke”. This is how Paul is – always “pulling your leg” or making a joke, even in serious circumstances, taking the edge off what could otherwise be a tense moment.

That playfulness and lightheartedness was always tempered by the things Paul actually gets involved with. He often conceptualises or participates in efforts that help others and the community. During his long years in media sales, he has helped to develop many community programmes including the Dollar for Scholars, Stocking Stuffers, Trot for Tots and Secret Santa. He has co-produced three telethons for charity and is on the committee for Andros Crab Fest and Cat Island Rake n’ Scrape Festivals. He is also on the committee for the Sandilands Rehabilitation Centre’s 2019 Geriatric Hospital’s Push-A-Thon and the Bahamas National Council for Disability.

“My passion is to be involved in organisations that promote Bahamian culture and help people,” he said.

Paul was born in Nassau and grew up on Providence Avenue in the heart of Chippingham, the fifth of eight children born to Dennis and Rosie Fernander. It was a lower-middle class community where everyone in the neighbourhood knew each other and “all had to have respect for older persons”. The Fernander kids grew up across the street from RM Bailey Jr (his father is whom the high school is named after). They considered him their adopted grandfather and the neighbourhood considered him “the mayor of Chippingham”.

He holds fond memories of his childhood days: “Providence Avenue was the street where the community came to see who was the fastest sprinter; and the Fernander boys were the ones to beat. The races were mostly one or two lamppost sprints and bragging rights. During Christmas holidays, children on bikes and skates filled Providence Ave as it was the main road in Chippingham and was usually the best paved road.

“I grew up in a time when going over the fort hill to Western Esplanade or going to the ditch in the back of Seafloor Aquarium to swim or pick sea grapes and coco plums were daily summer rituals. We were also fortunate to have a park a stone’s throw from our house. The C I Gibson park was the meeting place for all the boys in the area, as it could be used for flying kites, playing basketball, porking (hitting each other with a ball), swinging, or playing on the seesaw. The park was also the location for summer basketball tournaments. We saw teams come to Chippingham from Bain town, Christie Park, Rock Crusher, Farrington Road as well as other areas for epic basketball battles.”

During the 1970s, his mother Rosie was given an opportunity to attend university in North Carolina to obtain a Bachelor’s degree. She took her daughter along (another daughter died at the age of two) and left the five boys with their father. As Paul recalls, this gave the boys in the community “a house that everyone could come to and have a free-for-all daily”.

He first attended Quarry Mission Primary School, then William Sayles Primary. He passed the common entrance exam and was one of 125 fortunate students to receive a scholarship to The Government High School.

“During the summer after I finished GHS I worked with noted local photographer Antoine Ferrier,” said Paul.

“Ferrier was trained by George Poliard, who trained at the historic black college Tuskegee Institute. The love I developed for photography gave rise to my love for television broadcasting.”

Paul graduated in 1976, the year the College of The Bahamas was established. He studied communications and basic electronics at COB and then he left New Providence to attend the University of North Carolina in Charlotte.

“I started working with the Broadcasting Corporation of The Bahamas in 1979, and I was given the rare opportunity to train in both television and radio programming and production,” he said.

Because of his love for people, Paul joined the Bahamas Communication Public Officers Union under the leadership of veteran unionist Keith Archer. After a short stint in the general membership, Paul was elected as Assistant Secretary General. During the time Idena Burrows became President and he was elevated to Secretary General, after the promotion of the then-Secretary General Harold Carter to management in Batelco. Wanting more, Paul was nominated and succeeded in winning a Trustee position in the umbrella organization, the Trade Union Congress, under the leadership of Hudly Bodie.

Paul said: “In 1985 I moved in to the sales department at ZNS. In 1994 after the introduction of private broadcasting, I left ZNS to assist with the opening of More 94.9 FM as the Sales Director. In 2002, I returned to the BCB in the marketing and sales department. In 2006, I started working in marketing and sales at Tripoint Communications whose main core of business was electronic transactions products sales and service. In 2012 I started working as the Special Projects Coordinator for Guardian Media (Nassau Guardian, Freeport News, Print Masters, Star 106 Hits, Guardian Radio and Hot 91FM).”

Through his lengthy career in media and broadcasting, Paul always kept a thumb on community and cultural affairs and could be seen participating in too many events to mention. He also enjoys acting and once received a Dansa theatre award for best supporting actor for his role in Trevor Rhone’s play ‘Smile Orange’. He considered himself “extremely fortunate” to have worked with Rhone, whom he considers “an outstanding playwright”.

“After suffering a stroke on July 2, 2018, I realised that the way I treated persons I came in contact with throughout my life caused them to show me unprecedented kindness during my recovering period,” Paul told me.

“Persons from all strata of Bahamian society expressed kind sentiments, gestures, motivation and prayers for my recovery. I have heard people say ‘give me my flowers while I am living’ and I never fully appreciated the phrase until the amount of expressions of goodwill I received overwhelmed me. I will forever be grateful to my wife Porcia, my family, friends and in some cases strangers that became my friends because I shared my circumstances.”

He shared this advice: “My life lesson is simple – follow the golden rule to do unto others as you would have them do unto you. What I would like to share is… find a soul mate like I found in my wife Porcia… and become a rock for each other. Don’t take anything or each other for granted and remember, you are together for better or worse.