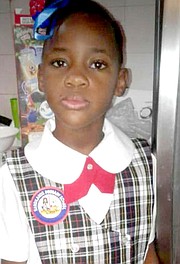 A DISTRAUGHT father struggling to raise funds to airlift his daughter to the United States for emergency brain surgery has made an emotional plea to the public for financial assistance.

Kenton Rolle is the father of nine-year-old Kenniyha Rolle who was rushed to hospital last week after she experienced symptoms of a stroke.

Unfortunately, his daughter’s medical bills are $100,000 and she doesn’t have any medical insurance.

“Last Wednesday the school called me to pick her up because she wasn’t feeling good,” Mr Rolle said. “When my wife took her to PMH, she did a scan and that’s when we discovered she had a brain tumour. They released some of the fluid out of her head to relieve some of the pressure.”

Mr Rolle said an MRI scan showed his daughter has a tumour that required immediate removal.

“She is currently in the Intensive Care Unit. Sunday, the doctors took the tube out of her throat because she was feeding through the tube and they removed the drips from her hand. Now she can talk and is doing good.”

Mr Rolle said his family is in dire need of financial assistance.

Yes, yes it shouldn't be a comrade parent of sick child are left pass around Hat provide medical care child, yes, no - let's move swiftly to introduce Universal BahamaCARE for all, yes, no?

All school aged children should have medical insurance through the school upon enrollment! That should solve that problem without burdening taxpayers!