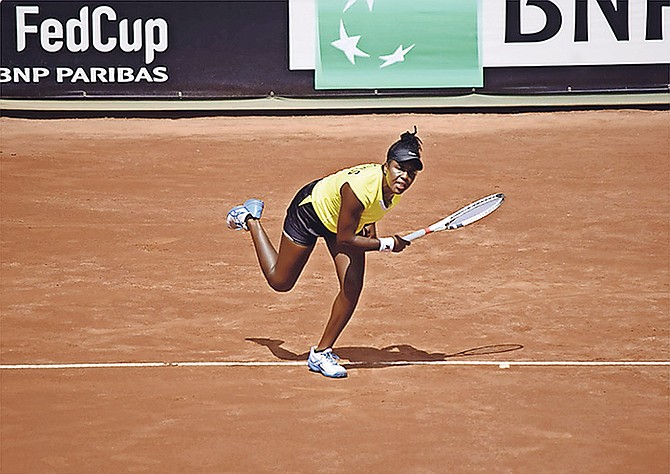 The Bahamas got off to a perfect start with a dominant performance in their opening match at the 2019 BNP Paribas Fed Cup.

Thompson began in singles play with a 6-0, 6-0 win over Melena Lopez.

Cartwright followed with another singles win and clinched the tie as she defeated Tangia Codrington in straight sets 6-0, 6-0.

Clarke and Donaldson teamed up to defeat Lopez and Chloe Weekes in a three-setter that took two hours and 47 minutes. The Bahamian duo eventually emerged with the 7-5, 6-7(1), 7-5 win.

Next up for the Bahamas will be a matchup against Trinidad and Tobago.

For the next three days, 11 countries will compete across two different venues - six in Lima, Peru, and five in Santo Domingo, Dominican Republic in a round-robin format.

The Bahamas is grouped with Barbados and Trinidad and Tobago in Group B while Bolivia, Panama, Peru are in Group A. The winners of each pool will play-off to determine which country will advance to Americas Zone Group I.

In Santo Domingo - Cuba, Dominican Republic, Guatemala, Uruguay and Venezuela will compete in one pool, with the winner of the group promoted to Americas Zone Group I.

Two teams will be promoted.

Last year, The Bahamas emerged on top of Pool B with a 3-0 record, having won over Bolivia, Trinidad and Tobago and Bermuda before they lost 2-0 to Ecuador, who got promoted to Group I.

The team was made up of Cartwright, Thompson, Donaldson and Simone Pratt. They were captained by Marvin Rolle.

In the 26 matches she participated in, she has compiled a 17-7 win-loss record in singles and 7-6 in doubles.

Clarke, 18, played on the Fed Cup team for the first time in 2017. As the island nation’s top junior player, Clarke went 1-3 in singles and 1-0 in doubles in the four matches she contested.

Donaldson, 18, has played on four Fed Cup teams since 2015. While she has not played in a singles match, she is 1-5 in doubles.

In the 95 ties The Bahamas participated in, we have compiled a 34-60 record and advanced to Group I several times.