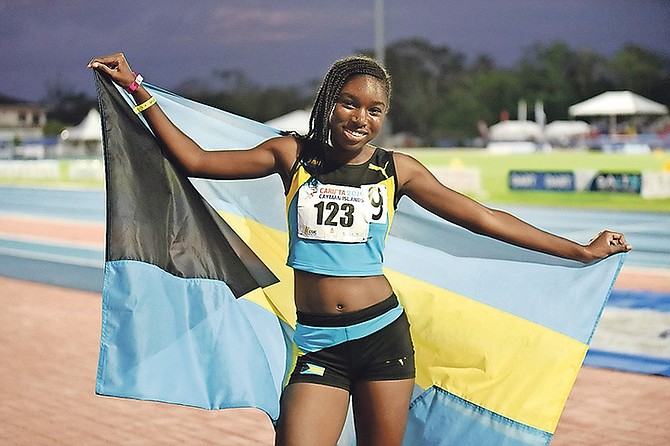 Jasmine Knowles after her win in the under-20 girls’ 800m.

Team Bahamas’ 50-member track and field team got off to a fast start in their gold rush, but fizzled off at the end in the overall medal haul as the 48th CARIFTA Games came to a close last night.

Over the Easter holiday weekend as the games returned to the Truman Bodden Sports Complex in Georgetown, Cayman Islands, for the third time since 2010, the Bahamas captured nine gold, seven silver and 10 bronze for a total of 26 medals.

Last year at the Thomas A Robinson National Stadium, Team Bahamas electrified the home crowd with a second place finish with 35 medals, including six gold, 14 silver and 15 bronze.

The Bahamas, however, was not able to stop the Jamaicans from tightening their stranglehold of the title as they picked up their 35th straight and 43rd overall with 85 medals, including 36 gold, 33 silver and 10 bronze. 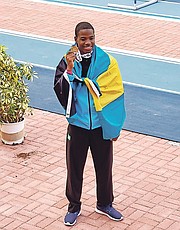 Shaun Miller, gold medallist in the under-20 boys’ high jump.

Last year they dominated in the Bahamas with 82 medals, inclusive of 44 gold, 27 silver and 11 bronze.

And for the second consecutive year, sprinter Brianna Williams collected the Austin Sealy award for the most outstanding athlete. She won the under-20 girls’ 100 and 200 and anchored their 4x100m relay team to victory after moving up from the under-17 division, where she accomplished the same feat.

Trinidad & Tobago came a close third to the Bahamas with 5 gold, 7 silver and 12 bronze for their total of 24 medals.

After the Cayman Islands hosted the games for the third time, the scene now switches to Bermuda for the hosting of the 49th version of the games. This will be the fifth time there, the last was in 2012.

• Here are the highlights of Team Bahamas’ performances.

In the final individual race on the track for the games, Gabriel Curtis got outsprinted by defending champion Keveroy Venson on the final lap of the boys’ under-20 5,000m.

His younger brother, Mitchell Curtis, out to defend his title and bagged a second gold medal, faltered on the final of the seven and-a-half laps of the under-17 boys’ 3,000m for the bronze in 9:16.96.

Anthaya Charlton’s bid for her third straight gold was snapped by the Jamaican 1-2. Charlton, running on the inside in lane two, got the bronze in 13.83. Kay-Lagay won in 13.68 and team-mate Crystal Shaw got the silver in 13.72.

Bahamian Reshae Dean got eliminated on a false start. That was followed by another bronze medal from Gabrielle Gibson in the under-20 girls’ 100m hurdles in 13.80. The Jamaican was going for another 1-2 feat, but Crystal Morrison struggled midway through the race as her team-mate Ackera Nugent won in 13.24.

In the relays, the under-20 boys 4 x 100m team of Ure Miller, Rico Moultrie, Adrian Carey Jr and Joel Johnson were in contention for the gold. However, Jamaica’s Ryiem Robertson caught Johnson before the finish line for the gold in 39.46.

And the boys under-17 team of Mateo Smith, Wendell Miller, Otto Laing and Davon Johnson ran 42.18 for the silver behind Jamaica’s winning time of 41.59.

But both the under-17 and under-20 girls teams finished in fourth place.

The under-17 girls team of Javonya Valcourt, Collinique Farrington, Shaunece Miller and Anthaya Charlton ran 47.56, while the under-20 girls team of Kavon Stubbs, Megan Moss, Vinajah Adderley and Jaida Knowles did 45.59.

In the under-20 girls race, the team of Marissa White, Jasmine Knowles, Gabrielle Gibson and Megan Moss prevailed with the silver in 3:40.51 to trail Jamaica, who won in 3:36.76.

Rhema Otobar, winner of the gold medal in the javelin.

And to put the icing on the cake, the under-20 boys 4 x 400m relay team of Shaun Miller, Terrance Jones, Markenson Joseph and Matthew Thompson finished the three-day competition with a bronze in 3:14.54.

And Hughie Sean Rolle had to settle for the bronze in the under-20 boys javelin with a heave of 60.45m (198.4). His team-mate Michelangelo Bullard ended up fourth with 59.39m (194-10). The gold and silver went to Trinidad & Tobago and Greneda respectively.

Anthaya Charlton, establishing herself as a candidate for the Austin Sealy Award, clinched her second straight gold in the under-17 girls long jump with a leap of 5.81m (19-0 3/4) to highlight Sunday’s morning session.

During the evening session, the 16-year-old Charlton was presented with her 100m medal by Frankie Campbell, the Minister of Social Services & Urban Development, who accompanied the team to the Cayman Islands.

Perhaps the more gutsy performance of the meet came from Jasmine Knowles in a stack field of 13 competitors in the under-20 girls 800. The 17-year-old Grand Bahamian took the lead from the break point, went through the first 400 in 59 seconds and surged to an impressive win in a personal best of 2:09.49.

Anthaya Charlton, double gold medallist in the under-17 girls’ 100m and long jump.

And in a Carifta record breaking performance, Keyshawn Strachan tossed the under-17 boys javelin 64.31m (211-0) to claim the third gold of the day and the ninth in two days.

Matthew Thompson, using his height, took an early lead through the first five flight of hurdles in the under-20 boys 400m hurdles, only to watch as Barbados’

Rasheeme Griffith powered from behind to take control of the final five flights for the gold in 51.47.

Thompson ended up getting the Bahamas’ first silver in 52.23.

The second silver came from Patrick Johnson in the open boys octathlon with a total of 5,244 points. Edvaughn Carey dropped to fourth with 5055 as they both struggled in the final of eight disciples in the 1,500m. The other disciplines were the 100m, long jump, shot put, 400m, 110 hurdles, high jump and javelin.

Reshae Dean had to settle for the bronze in the under-17 girls 400m hurdles in 1:03.52 behind a Jamaican sweep of the top two spots, including the gold from Shaquena Foote, the winner of the open 400m the night before.

Wendell Miller, still celebrating his gold in the under-17 boys 400, struggled on the outside in the 400m hurdles and was fourth in 56.07, while Gabrielle Gibson could do no better than sixth in the under-20 girls 400m hurdles in 1:05.67.

Grand Bahamian Terrance Jones closed out the competition on the track with a bronze in the under-20 boys 200m with 20.89 with Rico Moultrie trailing in fourth place in 20.98.

with her bronze in the under-17 girls’ high jump (1.68m/5-6) in the morning session, there was an avalanche of outstanding performances in the evening session.

Shaun Miller Jr highlighted a gold rush when he joined his younger sister on the podium with his victory as he became the latest Bahamian to clear the 7-feet mark with a personal beast of 2.16m (7-1).

On the track, Mitchell Curtis struck for the first gold in the under-17 boys 1,500m in four minutes and 09.34 seconds with team-mate Omar Kelly 11th in 4:32.95. Curtis, 16, had sufficient real estate ahead of him to hold off the field this time to improve on his second place last year.

That was followed by what could have been another gold from older brother Gabriel Curtis. However, the tall lanky 19-year-old exerted too much energy in taking an early lead and was caught and passed by a Jamaican duo on the home stretch.

One of the most inspiring performances came from another lanky competitor in Wendell Miller, who stormed back in the final 200m to easily snatch the gold in the under-17 boys 400m in 48.45.

Terrance Jones, winner of the under-20 boys’ 400m gold medal.

After both Marissa White and Megan Moss fell short of the podium in the under-20 girls 400m, Grand Bahamian Terrance Jones mustered enough energy on the home stretch to power to victory in the under-20 boys 400m in 46.29.

Anthaya Charlton continued the winning trend in the under-17 girls 100m in 11.51 and Adrian Curry Jr completed the century races with a repeat bronze from last year in the under-20 boys race in 10.42.

In between their races, Davon Johnson finished seventh in the under-17 boys straight away race in 11.07 in lane one and Jaide Knowles just missed her spot on the podium with fifth in 11.79 in the under-20 girls century won by Jamaica’s champion Brianna Williams a run away finish in 11.25.

The first day was completed with Rhema Otobar putting the icing on the cake with her heave of 43.07m (141-4) to win the final gold for Team Bahamas in the under-20 girls javelin. It was her second straight gold, adding to the one she clinched in the under-17 event last year.

Latia Saunders missed out with an opportunity to join Otobar on the podium with her fourth place with 39.48m (129-6) behind a pair of Trinidad & Tobago silver and bronze medalists.