Carifta Swimming Team On Way To Repeating As Champions 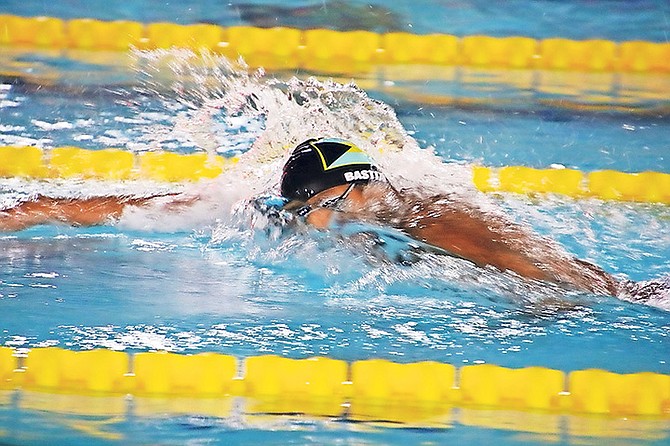 THE Bahamas is well on its way to repeating as the champions of the CARIFTA Swimming Championships.

As the third day concluded in Bridgetown, Barbados, the Bahamas pushed its medal total to 55 with 28 gold, 13 silver and 14 bronze, ahead of Jamaica, who trail with 15 gold, 20 silver and 11 bronze for 46 medals.

But unlike CARIFTA track and field that is decided on medals, the swimming competition is determined by points. And the Bahamas leads in that category with 667.50, 100 points ahead of Jamaica, who follow with 565.

The swimming competition will wrap up tonight, followed by the open water swim. At the end of day two on Sunday, the Bahamas had accumulated a total of 39 medals, inclusive of 18 gold, 11 silver and 10 bronze and 457 points to control the leaderboard of the 22 participating countries.

After the first day of competition, Team Bahamas had already collected nine gold, five silver and seven bronze for a total of 21 medals and compiled 233 points to lead the field.

Individual medal winners from last night were not available up to press time, but here’s a look at what they did over the first two days of competition.

Team Bahamas got a pair of 1-2 finishes in the boys’ 11-12 and 15-17 divisions to help booster their performances as they head towards a repeat overall performance.

Carey joined Luke-Kennedy Thompson, Izaak Bastian and Ian Pinder, who all surpassed the B qualifying time for the Pan Am Games as well in their respective events on Saturday.

The Pan Am Games is scheduled for July 28 to August 11 in Lima, Peru.

Another outstanding performance came in the boys’ 15-17 50m butterfly where Izaak Bastian took the gold in 25.10, followed by Davante Carey in 25.88 for the silver.

The best showing came from the boys’ 15-17 division where the team of Davante Carey, Izaak Bastian, Ian Pinder and Kevon Lockhart prevailed in a CARIFTA record time of 3:54.32. Their feat came after the team of Marvin Johnson, Ethan Pinder, Asher Johnson and Tristin Ferguson clocked 4:46.54 for the other gold. Also, the team of Keianna Moss, Zaylie-Elizabeth Thompson, Rachel Lundy and Delaney Mizell got the silver in the girls’ 13-14 race in 4:39.15.

And the boys’ 13-14 team of Ishan Roy, Erald Thompson II, Nigel Forbes and Taye Fountain struck for another silver in 4:16.65.

Not only did they win, but Luke-Kennedy Thompson, Izaak Bastian and Ian Pinder all surpassed the B qualifying time for the Pan Am Games as well in their respective events.

Team Bahamas would also shine in the relays, winning a medal in all but the girls’ 15-17 4 x 100m freestyle as they closed out Saturday’s competition on a high note.

And the boys’ 11-12 4 x 100m freestyle with the team of Tristin Ferguson, Amauri Bonamy, Ethan Pinder and Marvin Johnson captured the other gold in 4:08.13.