$95m Overhaul Promises To Be End Of Bpl Generation Woe 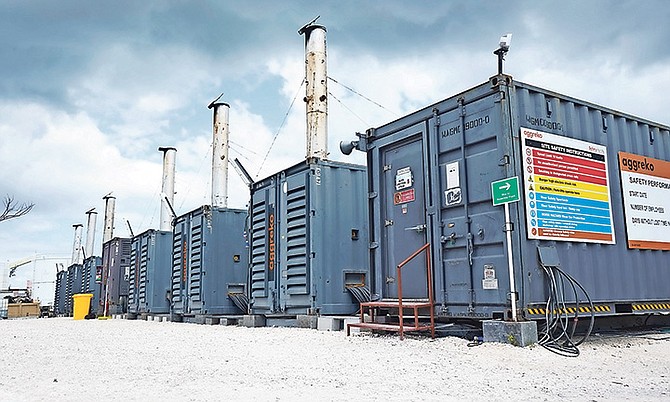 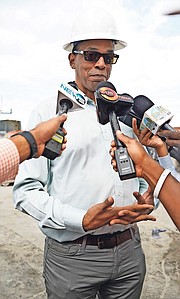 THE acquisition and installation of seven new Wärtsilä tri-fuel generation engines by Bahamas Power & Light was yesterday pitched as the “end” to the utility provider’s longstanding electricity generation woes.

All of this is expected, he said, as early as this summer.

Speaking to reporters on the sidelines of a tour of BPL’s Clifton Pier facility organised for URCA representatives, Mr Rollins said the power provider has committed itself to generating electricity more efficiently and reliably.

He said the new generation should also, over time, result in a “significant” cost reduction for consumers, but insisted those savings would be offset or enhanced by fluctuations in fuel cost.

“If everything goes as planned, I would say by summer… engines will be in by next month, we just have to connect them up and get everything going,” Mr Rollins said. “We are going to put seven generators in [Station B], so that’s 132megawatts of power; and that is what we are doing right now, getting the hall ready for that.”

He added: “The engines [will be ran on] tri-fuel. They’ll start on heavy fuel oil (HFO) and they’ll switch to LNG once LNG becomes available in The Bahamas.”

The LNG component is expected to be incorporated as early as 2021, according to Mr Rollins.

He continued: “…We are trying to get this ready for end of May. That is the timeframe we are working with to get all the work done. But the engines will be going in parallel with some of the work being done.” 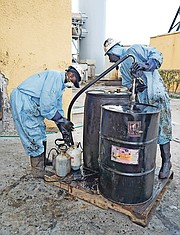 “Going into the summer, our peak period, we want to keep power as reliable as possible. We’re bringing in 25 more megawatts of rental generation just to get us through the summer, this summer. This will be our last summer of renting generators,” Mr Rollins insisted.

As it stands, BPL currently depends heavily on the 90 megawatts of rented Aggreko power generators - 80 megawatts at its Blue Hill Road facility and 10 at its Clifton Pier facility.

An additional 40 megawatts are generated at the Blue Hill facility by engines owned by BPL.

While at Clifton, Station B is producing another 50 megawatts of power.

Station C, which suffered through a major fire last year, is still offline.

Mr Rollins said BPL has completed several reports that outline the cause and the extent of the fire, all of which are either with Cabinet or insurers.

When pressed for detail on those reports Mr Rollins sidestepped questions, telling reporters: “We are not at liberty to disclose any information regarding the fire.”

When asked exactly when or if Station C will be up and running again, he said that determination will have to be made by the insurers, who are reportedly still in the process of reviewing BPL’s claim.

The BPL/Wärtsilä deal was officially announced on March 4. BPL is responsible for the full $95m price tag for the upgrades.

The engines are expected to arrive in the capital in the coming weeks, and will BPL will move into installation soon after the arrival.

In March, shortly after the announcement of the BPL and Wärtsilä deal, Bahamas Electrical Workers Union president Paul Maynard demanded that members of his union be trained to work with and eventually manage the new engine.

His comments came amid reports that Wärtsilä, a Finnish technology group, would require BPL to keep its personnel around to manage the new engines, given that no one at BPL possessed the skill set to work with them.

“My main concern is (Wärtsilä Business Development Manager Edmund Phillips) saying Wärtsilä gonna run this plant,” Mr Maynard said. “In which country they gonna run a plant? Not in this country and not as long as I’m union president, you gotta be crazy. That ain’t happening

“Let me tell you something, it will be a cold day in hell before Paul Maynard allows Wärtsilä to come in here on a plant we pay $95m for and run it, sending the staff that I represent home.”

Regarding the dispute yesterday, Mr Rollins said it was being “addressed”.

He said BPL has identified several employees to be trained in the management of the new engines, but could not provide reporters with a definite number of employees being trained or the timeframe of that training.

When another country controls your energy and your food supply then they control you. Welcome to the Bahamas! we are less independent than ever before. And guess what the next step will be... PS: they don't want to get rid of the heavy fuel usage because few countries will allow it to be burned consistently and not in an industrial environment. so essentially they are dumping it here.just like Carnival is/was doing.

Less of the conspiracy theories. We are so small (250k people on New Providence) that no one abroad would bother even thinking of a conspiracy theory involving us, let alone carry it out. The heavy fuel we use is less than a millionth of one percent of production...so..no.