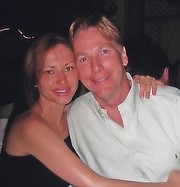 Bernard Ross pictured with his wife.

BERNARD Ross, the project manager for 4M Harbour Island LTD, was convicted of heroin possession in the United States in 1976, one of several run-ins he had with the law.

The Houston Press, an online newspaper, has written critically about his business dealings before he came to The Bahamas. Mr Ross escaped police custody in 1976 as well.

He admitted to the escape according to a court document seen by The Tribune. He wrote: “On February 4, 1974, in Harris County, Texas, I did intentionally escape from the custody of Edward Soptick when I had been charged with the felony offense of unlawful possession of a narcotic drug, to wit, marijuana and had been arrested by the said Edward Soptick by virtue of an alias capias issued upon the order of William M Hatton, judge of the 176th District Court of Harris Country, Texas on a motion to rebuke the probation having been previously granted for said felony offense.”

He has legally changed his name at least twice. He changed his last name from Doelling to Ross in 1986. He filed a petition to change his name from Gary Ross to Bernard Ross in 2016, according to a document seen by The Tribune.

The government gave Mr Ross a work permit that is valid from March 2018 to March 2020. Ben Simmons, a critic of the development, questioned why. “Given the ecological sensitivity of the project,” he said, “someone that has zero experience with marina development and has such a colorful history raises questions about what qualifies him for the job.”

Michael Wiener, developer for the project, defended his hire of Mr Ross yesterday. “The project has not been put into Mr Ross’ hands,” he said. “He is my local representative, but I am involved with the development on a daily basis. I am the only authorised legal representative and surrounded by the best talent in their fields (legal, construction management, general contractor, civil engineer, etc..), all of whom are Bahamian with one exception. I have my family’s money invested in this project and I am committed to its success not only for myself and my family, but the for people of Harbour Island and the wider Bahamian community. Specifically, in reference to the employment of Mr Ross, this was a decision I made in furtherance of my own values, which includes the principles of forgiveness and second chances.”

A government representative said the Bahamas Investment Authority was aware of Mr Ross’ record because Mr Wiener was open about it. The government was satisfied with the developer’s assurances, the source said.

He should fit right in!

"A government representative said the Bahamas Investment Authority was aware of Mr Ross’ record because Mr Wiener was open about it. The government was satisfied with the developer’s assurances, the source said. " HILARIOUS!

What percentage of DEA and DEU agents would you guess use illegal drugs? let’s say marijuana and cocaine? Please be conservative in your estimates. The percentage of active DEA and DEU agents that use contrabands regularly? So we still digging up 40 y/o graveyards? Well motor bike! Can you imagine how many young Bahamians lives were destroyed because they were caught with a joint? A joint on marijuana that is now a legalized multi Billion dollar industry that n the US alone. Yet they have their agents with helicopters disturbing innocent people during sleeping hours and printing on the front pages of the 10,000 pounds of marijuana that was ‘seized ‘, Chile please! They seek more than that in 10 minutes in LA and not the medical marijuana either!

Boy, when we fight, we fight dirty. The guy should be commended for turning his life around.

And you're a real Christian?! Suggest you just skip to the front of the line like all of those other Christian types who believe they are destined to end up in heaven. LMAO

Unfortunately, this man did not turn his life around. Before you speak, educate yourself.

"government representative said the Bahamas Investment Authority was aware of Mr Ross’ record because Mr Wiener was open about it. The government was satisfied with the developer’s assurances, the source said."

Of course the govt is comfortable with criminally colourful investors. What did the PM say after Oban discoveries? *what's all the his about?

Please Citizens and friend of The Bahamas, let us stop whipping people continually with the sins of their pass. The man, no doubt, has paid the consequence for his past. And it is obvious from his present business and associates, he has learnt his lesson and have made something of himself ever since the unfortunate incident.

Please let's stop the hating of what we all are: S I N N E R S. But for the mercies of God, there goes I.

Google Gary Ross, Teflon Man and see if you change your mind about him learning his lessons.

Will the same apply to the poor black men from over the Hill?? DO They matter when they make mistakes?/

Exactly will we look at ninety Knowels, or Dwight Major or Melvin Maycock etc. in the same light and give them the same opportunities umm No but I guess maybe if they change the color of their skin they would have a chance. the Bahamas = land of Hypocrites

Nigel Bowe does not possess some loathsome sinful disease that cannot be cured. When you call Nigel Bowe name do not for get to call Meyer Lansky's name. The principal investor in the development and founding of Paradise Island and Freeport Grand Bahama.

These men, though of questioned reputation, were fundamental in the development of this economy of which you and your parents benefited and enjoyed.

YES. Samuel Knowles, Dwight Major and Melvin Maycock and whosoever, if shown and demonstrated, they are deserving of an opportunity to show themselves to be otherwise than the prevalent opinion shallow minds have of them. However, it remains to see whether or not we as a collective body or Country are deserving of such men as these in their true and highest potential.

Moses was a fugitive murderer; Paul was a persecutor/killer of the Christian. In fact, Jesus was a law breaker. He was a convicted felon.

Don't stress yourself Mr Weiner. Most Bahamians attend church every Sunday, but 93% of them have never heard about Jesus's teachings on forgiveness. At the same time, 94.6% can't remember which brand of toilet paper they used in 1976.

You would be surprised to know what real Christians know about Christianity. Then again, you may fear knowing about that for fear of where your own soul may well end up when your time comes. LMAO

Yes. The 7% remaining from my referenced 93% above im sure know a lot.

Here are some articles on Mr. Ross when he was called Gary. If you still think he’s just a guy who made a mistake, think again. We don’t need foreigners like this in our country. We’ve got enough with our own political corruption on both sides.

Let all of those self-righteous among us and without sin step forward and condemn this man for doing something to himself that caused no harm to anyone else!

We need to leave this hard working man alone and focus on Perry Gladstone Christie and Hubert Alexander Ingrahms 25 years of collaborative corruption that landed ALL OF US in $Billions in debt!

Good luck and GODS' speed Bernard Ross! I hope you make all the naysayers eat crow!!