Isaacs Jr talks about fresh start with the Rockies 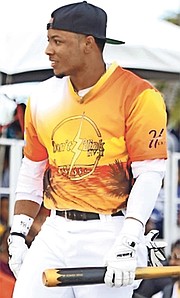 TODD Isaacs Jr discussed his fresh start with a new franchise while Lucius Fox and Reshard Munoe were honoured for the first time this season over the weekend.

Isaacs was signed by the Colorado Rockies earlier this month to begin his stint with the second club of his minor league career.

After spending nearly four years with the Cleveland Indians organisation, Isaacs was released at the end of March and detailed his thoughts on the transactions on the Paradise Vibes Only Podcast alongside Fox and Tim McMaster.

“It’s definitely a business, I’m forever grateful to the Indians for giving me the opportunity in 2015. They really shaped and molded me as the man I am, the person I am and the baseball player I am today,” Isaacs said. “There really was a lot of values that I learned from the organisation that I will carry for the rest of my life, I made some really good friends, met some really cool people, the biggest thing for me was in my life wherever I go I want to leave an effect on the people around me and that’s what I feel like I did. I felt like I built lifelong relationships with people that will last forever.”

Isaacs made his Spring Training debut with the Indians in March.

Last season, he completed his second season with the Lake County Captains, of the Class A - Midwest League.

“I didn’t realise having that sense of urgency and what it means to be grateful until the day came and I got released. It was really bitter in that moment, but the week and-a-half I spent at home it really gave me an opportunity to clear my mind, take a step back and realise that whenever my next opportunity comes...everyday I have to practice and perform like it was my last,” Isaacs said.

“I realise that my career could be done at any second. The Rockies could have not called me and that could have been it right there and I’m forever grateful to the Rockies for giving me a second opportunity and this is where I feel like I need to be. I can’t wait to win a World Series with the Rockies one day.”

Isaacs, 22, is still awaiting an assignment from the organisation.

Fox hit a solo home run Friday night in a 3-2 win for the Montgomery Biscuits over the Birmingham Barons in game two of the five-game series in Double A Southern League play.

Fox recalled his own memories of being traded from the Giants to the Tampa Bay Rays organsation just hours before the trade deadline passed in August 2016. “Some people look at in in different ways. I didn’t look at it like the Giants didn’t want me. It’s a business but it showed me how bad Tampa wanted me because they sacrificed one of their best pitchers to acquire me that day,” Fox said.

“I’m forever grateful to the Giants for signing me but I’m also in a great place right now and I’m happy with Tampa because it’s helped my game grow. Everyone in the Rays system has been instrumental in me becoming the player I am today and I’m thankful for it all.”

Munroe hit a solo home run in an 8-3 win for his Dayton Dragons over the Great Lakes Loons in the first game of their series. He finished 2-3, including the home run and a triple, drove in two RBI, two runs scored and one stolen base.

Munroe advanced out of the Pioneer League where he was assigned to the Dragons from the Billings Mustangs. He led the Billings in home runs, triples and was among the team’s top three in nearly every statistical category.