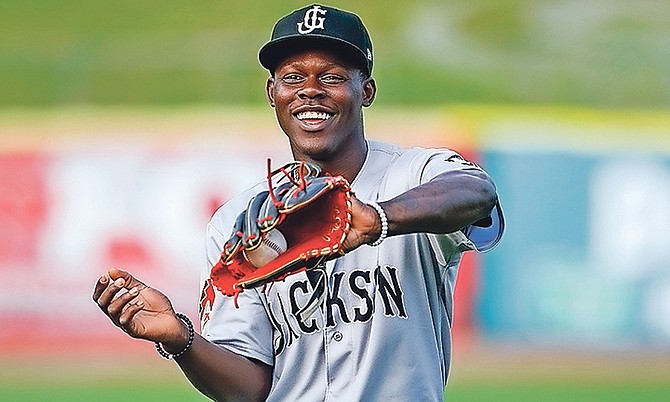 After spending the past four years with the Arizona Diamondbacks, Jazz Chisholm is moving closer to home with the Miami Marlins in a deal before Wednesday’s trade deadline that will allow him to join fellow Bahamian right fielder Anfernee Seymour on the Jacksonville Jumbo Shrimp Double-A team.

“They did what they thought was a business decision for them, but I feel fine about it,” Chisholm told The Tribune. “I’m excited and disappointed at the same time. I’ve been with the Diamondbacks for the past four years, so that’s the sad part about leaving.

“But now I get to start a new journey, being with some new guys and getting to know some new people. I can’t wait to see what will happen now that I am moving on to a new team.”

The 21-year-old becomes the third-ranked prospect in a rebuilding Miami system behind No.26 overall prospect Sixto Sanchex and No.32 JJ Bleday.

Chisholm is MLB.com’s No.8 shortstop prospect and surpasses No.10 Jose Devers as the top shortstop in the Miami pipeline.

Chisholm signed as an international free agent in 2015, and is a career .253 hitter with 53 home runs over four minor-league seasons. He is hitting .204 with 18 home runs and 44 RBI in 89 games at the Double-A level this season.

The Marlins expressed their delight in acquiring Chisholm’s services. “Chisholm posts impressive exit velocities from the left side of the plate with an explosive swing that has a natural loft. He showed in 2018 that he not only could tap into his plus raw power but also apply it across the entire field, as some of Chisholm’s longest home runs were hit to straightaway centre,” the Marlins wrote.

“Chisholm’s power does come with swing-and-miss tendencies, so he’ll need to refine his aggressive approach as he develops. He’s an above-average runner who receives praise for his instincts on the basepaths.”

“I never got to play with another Bahamian, but a couple of the guys have and from what they have told me, it was just amazing having another Bahamian on the same team, so I can’t wait to see what happens in Jacksonville.”

Gallen was quite surprised by the trade.

Gallen, 23, came to the Marlins as part of the Marcell Ozuna trade in December 2017 and made a quick impression in his first seven MLB starts this year.

During the 2018 season, he was named to the MLB.com Organisational All-Star game.

Seymour, 24, was signed as an outfielder with the Marlins on July 17, 2014 out of American Heritage in Delray Beach, Florida. He too played in the Mid-Season All-Star in 2015.

Chisholm and Seymour are among a list of about 20 players playing in the minor league pipeline, waiting for their breakthrough to add to the six Bahamians who played previously in the major league.

He thanked all the Bahamians who called and texted him after hearing about the trade.