We Need An Explanation For This Photo, Says Hanna Martin 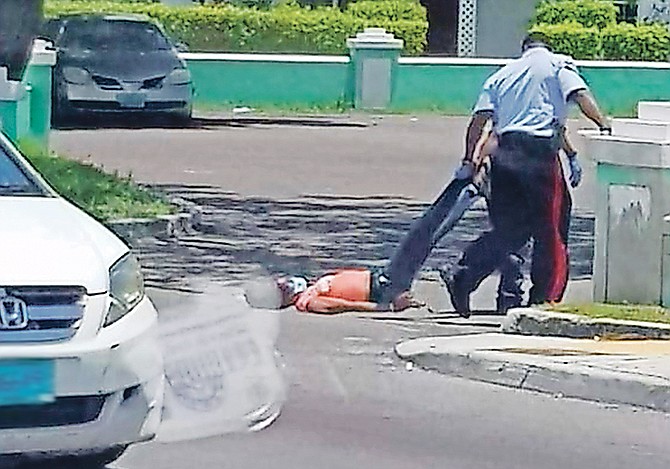 ENGLERSTON MP Glenys Hanna Martin is demanding answers from the Royal Bahamas Police Force in view of a “disturbing” viral image that appeared to show two uniformed officers dragging a handcuffed woman across the road.

Videos posted to social media showed the woman acting bizarrely and disrupting traffic in the middle of a busy street in front of a police station.

Mrs Hanna Martin said yesterday: “I have seen a newspaper story and photograph which appears to depict a woman being dragged by a uniformed officer along a tar road. This photograph is most disturbing and requires an urgent explanation by the police so as to allay concerns about alleged police conduct.

“We all understand the difficult daily task of law enforcement officers,” she continued, “and we support the police as they carry out their lawful duties to protect our citizens but we do not relinquish the protection of the law for every single person, nor will we forfeit our cherished constitutional rights. An immediate explanation is required.”

Police officials have not responded to the image despite repeated requests for comment.

The Tribune reached out to several officials on Tuesday, but there was no response.

When Police Commissioner Anthony Ferguson was asked about the matter yesterday, he said: “I have not seen it so I will have to research on the circumstances.”

The viral image outraged some Bahamians who found it inhumane.

One woman on Facebook wrote: “Y’all sure these police officers or gang members, can you imagine me seeing my husband doing that?”

Another user said: “What the hell am I looking at? This has to be photoshopped and have to be in North Korea. This just can’t be.”

Odd, isn’t it, that everybody in the Bahamas has seen that photo except the Police Commissioner?

Typical Bahamian government response: “We’ll look into it and file an official report ... in 3 or 4 years.”

ENGLERSTON MP Glenys Hanna Martin had no problem with police body-slamming and stomping people during the Paradise Island Cabbage Beach vendors march fiasco under the PLP!

This is why we have no respect for politicians. They all think that we are all too stupid to remember that the PLP and FNM are all the same.

I don't want to hear ANYTHING from the PLP and FNM!

It is astonishing how we Bahamians draw politics into everything, wrong is wrong it should never have anything to do with politics, my God if that was a dog or a surrey horse, the human society, this organization that organization, this church that church would be all over the place condemning this type of action, but sadly its only a HUMAN BEING so its no big deal, to the police officers GOD don't sleep and he don't like ugly, when these same people see things happening not to them but their children or their Loved ones they wonder why. GOD don't sleep and he don't like ugly. Do unto others as you would have them do unto you.

For once in my life...I agree with her. Let's hope that never happens again!!

We need a Constitutional amendment that says if 60% of voters spoil their ballots then the election is void and the Queen sends a Governor to rule for one year and new elections held at that time. If 60% spoil again then he/she remains another year. Then these Parties might try to find some better candidates to run and potcakes will stop barking.

If is it a staged picture is not on table, a sitting comrade House MP Queen's Loyal Opposition who calls further explanation by immigration officials for what is blatantly so dragging evident this photo, then "Sister" Glenys, is ideal candidate so shaded from reality as be officially declared as vision impaired, yes, no .... this is not the time slow rebuking of 35 elected Imperials red shirts .....