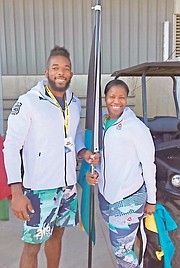 DAVID Morley and Chanelle Munroe both failed to make the top cut of 75, but they made history yesterday as the first Bahamians to compete in the Reebok Crossfit Games at the Alliant Energy Centre in Madison, Wisconsin.

The games, which got started in 2007, allow athletes to compete in workouts that they learn about hours or days beforehand, consisting mostly of an assortment of standard aerobic, weightlifting and gymnastics movements.

A total of 150 male and female athletes competed yesterday as they showcased the heart and determination required to be named Fittest on Earth.

Only the top 75 made the cut for round two today.

The games will wrap up on Sunday when the champions are crowned.

While the previous games were designed for those competitors who made the qualifying standards, this year they opened the door for the national champions in each country to compete.

If athletes failed to complete an event within the time cap (for timed events), their scores were capped and they received a one-second penalty for each rep not completed.

In yesterday’s workouts, the competitors all had to complete four rounds of a 400-metre run, three legless rope climbs and seven squat snatches in a time of frame of 20 minutes. Morley, a 28-year-old personal trainer who stands at 6-feet, 1-inch, and weighs 195 pounds, completed the men’s course 111 overall with a minus 36 points behind Marzougui Mootez of Tunisia in 75th place with no points.

Morley was unavailable for comments after the men’s competition that saw American Matthew Fraser lead a 1-2-3 sweep of the top three spots with 100 points.

“It was interesting, very interesting. The rope climb was what got to me. But I said I came too far to not touch the barbell,” said Munroe about one of the routines that enabled them to climb up a rope and touch the barbell before they could descend.

“The experience was good. It was a very good experience. I would definitely do it again.”

Although it was a blind shot in terms of what event they will actually do during the competition, the accountant by profession said she will certainly make an effort to work a lot harder on her gymnastics moves.

He noted that they have been doing Crossfit training for the last seven years and after they changed the qualification for the competition, they began the wheels in motion to get ready for this year’s games.

“David and Chanelle won the Bahamas open competition in February that lasted for about six weeks and they qualified as the national champions to represent the Bahamas,” said Johnson, the oldest of about 40 athletes who competed in the nationals.

Based on what he saw from the competition, Johnson said he was quite pleased with the performances from both Morley and Munroe as they trained with some of the top competitors in the world in preparation for the Bahamas’ debut at the games.

“This is the first time at this level of competition,” Johnson stated.

“David actually did well. They had three heats with 40 athletes in each heat. Chanelle was a little scared because she had never competed on the international stage before.”

As with Crossfit, Johnson said it’s hard to train for any particular routine because it’s not revealed what the athletes have to undertake until they get to the competition.

Johnson said with the barrier broken, it’s back to the drawing board for the Bahamas as they prepare for a return to the intense competition next year.