AS HE pledged to make public the findings of an investigation into allegations of police brutality in Exuma, National Security Minister Marvin Dames said there will be no “cover-up” if officers are found culpable of wrong doing.

He insisted there was evidence to confirm that in cases where officers are guilty of various offences, they are either charged in court or internally.

However, in instances where police conduct is called into question, the Royal Bahamas Police Force rarely reveals investigation findings, despite persistent questions from the media.

The latest claims of police beatings came earlier this week from two women in Exuma. They allege the brutality was at the hands of one of the most senior officers on the island.

“We are where we are and we’ll continue to look at how we could improve the process and you can see when police officers or law enforcement officers do wrong the evidence is there to show,” Mr Dames said. “Then those persons are dealt with whether it’s before the courts or whether it’s done internally.

“The matter over the weekend is very concerning to me. I had the opportunity to speak to the commissioner as well as to see some of the social media postings of that. The commissioner moved very quickly.

“A team was dispatched to the island of Exuma and commenced investigations almost immediately and so we will see very shortly the end results of those investigations.”

He continued: “We’re not here to cover up for anybody and that will not be accepted, not in this force. Police officers, law enforcement officers have taken an oath to protect the citizens of this country and those who visit and we expect that they live up to that oath.

Mr Dames said while the vast majority of officers are law-abiding citizens, the RBPF has no reservations with ensuring those who abuse authority are held accountable.

“So again the commissioner and I would have spoken to this matter at length over the weekend and he and his officers are taking this very seriously. We will ensure that at the end of the day that justice prevails and so we all will be watching to see.” 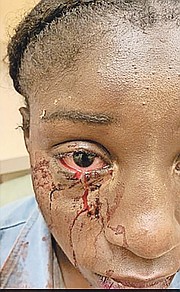 Images of blood streaming from the gashed eyelid of one of the women who claim police abused her, Dejah Laing, 19, were shared hundreds of times on social media over the weekend, attracting the anger of horrified users. The women and their families are now demanding that the officer responsible be fired.

Ms Laing, mother of an 18-month-old baby, was travelling home from the Rolleville Homecoming Festival & Regatta around 4.30 on Sunday morning along with her two cousins, Aaliyah Bain, 20, and Samuel Humes, 26, when their day took a turn for the worst.

Mr Humes, the driver, said he was about to be ticketed when he told the senior officer his two cousins were in the car.

The women said they were initially taken to a police station cell, then to the clinic and then back to the station where they were interviewed, processed and allowed to leave without charge.

The trio were recently hired at Sandals Resort in Exuma and they fear the incident has disrupted their lives so much that they could lose their jobs.

These new allegations have revived questions of whether the government has prioritised the implementation of body cameras for police.

Mr Dames said a contract for the equipment was expected to be signed next month.

“We’re on schedule. Cabinet would have approved the body cams. We have funding for the body cams. We’re in the process now of finalising the contracts between the parties - that is the government and the vendor.

“. . .I’m hoping that sometime next month we should be signing off on that.

“The other contracts, I think the dates have already been set for the CCTV contract and the Marco’s Alert contracts. We are now satisfied with where we are with the contracts - all parties have accepted the contracts to date and it’s just a matter of signing and I think the signing date for both the CCTV and the body cams have been set and we’re working.”

he can say what he wants, the police have been beating people for decades and it will continue until they have all been put before a court, spend time in prison and pay hefty settlements to the victims. Immigration beats people. The Bahamas is a third world banana republic, it's time to simply accept that fact.

Just spin. Do something Comrade Minister to seriously respond loud cries populaces living in fear of bullets and fists the constabulary, starting with the immediate suspension any members constabulary targeted investigation - regardless ranks, politics, yes, no ...

How long will our Cabinet and the MONS continue to stand back and watch these situations where the "police investigate the police"???? ......... That is outrageous ....... no accountability or transparency. This statement is as trite as what Trump made about the racist killers.

Talking about the majority of law abiding officers is the wring approach. Bullies are never the majority but they make everyone's life a living hell. These two little girls were beaten by three grown police officers because of decades of allowing police brutality to continue unchecked. Just last week Immigration beat up 2 young boys and issued a statement that it was their right to do so. Marvin Dames said not a word. Then this happened. Maybe if he had come out forcefully against abuse of prisoners we wouldn't be seeing pictures of this tiny girl with blood in her eye.

So many internal self investigation reports were promised but have never seen the sunshine ... likes just week ago recent invasion and arrest out comrade citizen's family's home - where children's were at home during constabulary's raid, yes, no .... And, there's that 'investigation' into gone missing from custody government - so-called OBAN documents - now missing like whole year, or what ever came of that much promised constabulary investigation alleged corruption atop Hawkins Hill ... have list another quick 10 that comes mind, yes, no ... including alleged stolen .fire-hydrants .... Has OBAN ever opened a single, tiny room of an office on any we colony's 700 cays and out islands ....why can't populaces gain access financial records and dealings OBAN... Likes, what be the names individuals in government, connected governing politicians - who have or would have financially benefited from OBAN .... Neither should colony's constabulary investigate their own - nor should government investigate they own selves and questionable dealings, transactions, hiring, nor political appointments .... still, government wasted no shutting down Capt's airline but not before talking loudly like market vendor, about Capt's Sky dealings .... And, this is but Imperialist red shirts19th day at governing over colony's populaces, yes, no ....

And, this is but Imperialist red shirts 819th day at governing over colony's populaces, yes, no ....

Bunch of sickos from top to bottom (there may be a few good men somewhere in between but they are getting harder to find). This camera bull has been going on for too long. If and when they finally install them, will they work and if so, when will they get turned off? Who will monitor them? The same creeps that monitor the 'ankle bracelets'? Sheeprunner12's comment about police investigating police is spot on. It makes no sense in this or any country.

Ma Comrade DDK, it's funny what you say, I me self tends run from lukewarm to red hot chili peppers as to sincerity performance Dionisio James, yes, no .... Nevertheless, a possible potential replacement Minnis, who knows ....

It is unfathomable Mavin Dames can even keep a straight face! The police are simply a legally armed gang of thugs, well known to have been abusing and torturing people for decades, with the full blessings of the PLP and FNM!

I guess none of yinna here read the story in the papers? I guess it is a true saying: "want to hide something from a Bahamian. . .put it in writing"!! Two of the persons involved in this story "admitted" to either "intervening" while the Police were dealing with the woman who got punched in her eye. . .and the male said: "when the police asked her to come out of the car, she refused. . .she missed and hit the police when she "mussie" raised up her hand". . .and other nonsense renditions as that mealy mouthed foolishness he said!

All kind of "mussie" and "missed and" when describing how the females carried on towards the Police. Think nah people. . .the Police beat those people up "for nothing" after stopping them for a traffic violation? Then took them to the doctor to have them looked after. . .? THESE PERSONS STORY DON'T ADD UP TO A HILL OF BEANS. I believe that some cut hip was "dished out" to persons who decided that they were going to "challenge" the Police for whatever reason!! Resisting the police in their lawful duties is "begging for a cut hip". . .allowed by our Penal Code!! Now the police may have "over done" the hip cutting. . .but please, stop talking like the Police "just stopped those people and started cutting they hips. . .for nothing"!! COMMON SENSE TELLS YA SOMETHING EEN RIGHT THERE. . .AND IT IS WRITTEN IN THE NEWS PAPER AND YINNA STILL TALKING FALLY!!

Licks2 just love to defend the police, I wonder why. These officers should be charged before the courts and if found guilty they should be jailed.