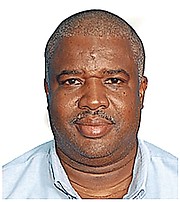 TRIBUTES poured in yesterday for veteran producer Colin Trotman Jr who died at 57.

Trotman was the assistant general manager of tv production at ZNS.

The National Emergency Management Agency (NEMA) also offered condolences to him. He was a former member of the National Disaster Preparedness Committee.

“During the construction of our present facility, he ensured that data connection was installed for live feed, thus ensuring that NEMA could broadcast live, 24 hours. He was committed to excellence,” said Captain Stephen Russell, head of NEMA, in a statement. “We will remember Colin for his professionalism as he served on (various) emergency support function groups. His willingness to learn and to assist others as well as his sense of humour will always be remembered.”

“You taught an overzealous ambitious young reporter the virtues of a steady head and tongue - even when under fire,” Mr Sawyer wrote. “You showed me that my talent and passion were enough - plain and simple.

“You got me to understand that being a leader meant recognising that everyone was important regardless of what side of the camera lens they worked on. You taught me the art of transforming an idea into a production - there’s no ‘clock’ when there’s work to do - and everything you do should be a masterpiece.

“In 1998 you edited my award-winning story that captured the CNN World Report’s Best Political Story. Never once did you seek recognition, instead you were just grateful that I was being recognised for what you always knew I had inside of me. To my colleague, friend, mentor, and teacher - thank you. Keep those cameras in heaven bright until we meet again.”

ONE OF THE KINDEST, RESPECTFUL AND MOST PLEASANT PERSONALITY ONE COULD EVER COME INTO CONTACT WITH.

HE WAS AN EXCELLENT EXAMPLE OF A HUMAN BEING.

I knew him and his parents from back in Abaco. His father was a policeman. All of the testimonies are true he was indeed as you said Godson,... ONE OF THE KINDEST, RESPECTFUL AND MOST PLEASANT PERSONALITY ONE COULD EVER COME INTO CONTACT WITH. HE WAS AN EXCELLENT EXAMPLE OF A HUMAN BEING. Deepest condolence to his family. may his soul rest in peace.