Insight: Come On Mr Bannister, Do Your Job 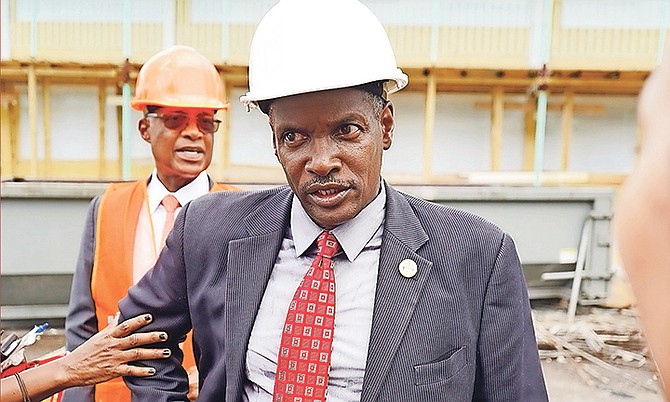 MUCH of what we understand about the world comes from the carrot and stick approach – do something good and get something good in return, or vice versa. From an early age, we were taught by our parents, teachers and other caregivers that good behaviour is rewarded and, conversely, poor behaviour is punished by some form of correction. Later, as we progressed through life, similarly, our productivity has always been linked to a merit-based system.

This is how most, if not all, of us understand the world to work. When we obtain jobs and enter the professional arena, the same holds true. When we perform well, we receive praise and accolades, and when we fall short of what is expected of us, well, we can expect to be the subject of criticism, or worse.

That being said, it is absolutely mindboggling to many that Public Works Minister Desmond Bannister continues to fail to meet the challenges he is tasked with in the Cabinet of the Government of The Bahamas. As minister with carriage over BPL, it is his responsibility to deal with the problem that continues to beset this country – and answer to the Bahamian people as a result.

It has been the exact definition of a tumultuous performance by any standard. Yet, the government refuses to deal with the situation, and Bannister needs to step up to the job at hand.

Bannister, who consistently refuses to admit the country is suffering from a full-fledged power crisis, continues to trivialise the misery being experienced by the Bahamian people. When he isn’t ducking questions on BPL, he is sticking to scripted messaging offering praise to the BPL employees and shifting the goalposts on when there will be an end to this madness.

The consensus among citizens is that this has been the worst we’ve experienced in a very long time. Add to that, the fear of a hurricane further impairing BPL’s inability to keep the lights on, and we could potentially have a country headed for catastrophe.

Although, according to BPL’s union boss, we’re already there.

“Listen, the most you could do is go to church every Sunday or go to prayer meeting and pray that we have a mild November, because believe me, if we have a hot November we going to be load shedding until December,” said Paul Maynard.

He continued: “They making noise telling you all about we are going to have those new units by October or November. Please, if they come in by December, they good.

“… My opinion is unless God comes out of heaven and puts them together, and you know that isn’t going to happen, you will hope to see them in March.”

Just realising the gravity of Maynard’s statements knots the stomach and sends shudders up the spine.

Families with young children tormented through the night - sweating in the dark, suffocating heat, where a comfortable night’s rest is a luxury that only the few spending thousands of dollars to run their private generators is an absolute nightmare that many of us experience daily as the load shedding continues without end.

Businesses losing thousands of dollars every day unable to operate efficiently, and visitors who would have saved their money from over a year ago planning a trip to The Bahamas have also been robbed of their vacation experience and are now making it known to other potential visitors in travel forums.

If this continues late into the autumn, this will be an unmitigated travesty.

To make matters worse, it honestly seems the government is merely waiting us out.

While as a people we will talk and complain, that rarely translates into any form of collective action. Yet, we wonder why the government ignores our pleas when we lack unity on the issues that affects the majority of us.

Higher up the chain of command, Prime Minister Minnis has been characteristically hands off – hardly touching this issue.

Ironically enough, next month will mark a year since he gave his assurances to the Bahamian people that he had “absolute” faith in the Minister of Works. A year later and all that we have to glean from is the old adage – silence gives consent.

The prime minister refuses to make a comment on this issue. Unquestionably, this is upsetting for many of us, as we are beyond statements and press conferences. Immediate remedies are the only thing of interest at this point for the Bahamian people.

The time has come for Bannister to step up and get on with his job – or face the consequences. This is the moment the Bahamian people expect Bannister to show why he has been chosen for the job he is in, and he must live up to it. He serves the Bahamian people, and he owes them answers about why BPL is in such a tragic state and when precisely we can expect an end to this nightmare.

We have been in the dark, in more ways than one, with the power corporation.

We have little to no official knowledge of what took place with the multitude of fires that occurred on New Providence, Abaco and Bimini. And unsurprisingly, there has been no publication of the report which Prime Minister Minnis said was commissioned to probe the firings of the BPL board last year.

Can you see a trend here?

And if Bannister doesn’t step up to the plate, then eyes turn to the prime minister.

Minnis, after a little over a year in his tenure as prime minister, decided to shuffle his Cabinet to allow ministers to have “exposure and experience” overseeing different ministries. However, the Bahamian people believed this was a result of what the public viewed as a poor fit with current Minister of Youth, Sports and Culture Lanisha Rolle formerly having oversight of social services.

Although her replacement hasn’t quite been the gold standard in the case of Frankie Campbell, however, it still was emblematic of the prime minister’s recognition of a much-needed change in his administration.

Now, questions are being raised as the prime minister continues to ignore what is taking place at BPL. By the same token, the media is taking it too easy on the prime minister. At each public appearance, he should be bombarded by a litany of questions surrounding BPL. Additionally, he should also be probed on Bannister’s refusal to speak to local media at the Nassau Guardian, as his personal feelings do not come before the justifiable frustrations of the Bahamian people.

Do you recall when Lanisha Rolle refused to speak to the media during her tenure as social services? Shortly after, she was familiarising herself with another portfolio.

Just as we would recognise Marvin Dames for a decline in crime, Dionisio D’Aguilar for our historic performance in tourism, the works minister must also be held to a standard.

Without a doubt, although the government has lost a lot of goodwill with the Bahamian people, Bannister’s poor management of BPL has surpassed all issues the electorate has with the Minnis administration in becoming their Achilles heel. And every day the power shortages continue, Minnis closes the window on a possible re-election just a little bit more.

VERY insightful. Brings to mind an old pre-election caricature either on a poster or a tee-shirt, of a lit torch being held under the derriere of a former political leader with the caption "Fire Da Man"!

And our dimwitted PM Minnis, who remains MIA, promised over and over again that it would be the people's time. What a joke that has turned out to be. As for the very incompetent Bannister, always be wary of men who like to put their hand on their hip.

Thanks Mr. Strachan, Another valuable Insight. Just what will it take? Honestly.

To begin with Mr: Strachan Marvin Dames has nothing to do with the decline in Murders, people who committee such offences do not say the FNM is in power or Dames is the Minister. It is something bigger than that. I hope it is found out very soon what the cause is, it will be helpful

Now why in the world you a Strachan would lie and give D'Aguilar credit for the increase in tourism. It is BAH MAR Strachan which he opposed and so did you Strachan.

REMEMBER STRACHAN&lt; Many of us do.

Forget the Minister of Works. We need a Prime Minister.....