Insight: ‘Four Years On And I’M Still Waiting For Police To Apologise’ 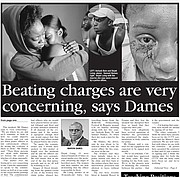 The Tribune’s coverage of the story from last week.

ON reading the complaint of the beating by the police of two women in Exuma last week and the promise by National Security Minister Marvin Dames that there would be no “cover up” if officers in the case were found guilty of wrong doing, a senior government employee reveals today that he is still awaiting the results of his own complaint against two junior police officers.

That was four years ago, and despite repeated requests, the police have remained silent.

The government official, himself a lawyer, said that in September 13, 2015 his wife, driving his car, was involved in an accident at the corner of Wulff and Baillou Hill Roads. On being notified, he went immediately to the scene and awaited the arrival of a Traffic Police Officer. As he stood on the pavement to watch he noticed the officer made no note of the position of the vehicles – “in fact he made no note at all” – although he had ordered the immediate removal of both cars.

The complainant said he became concerned, and as it was his vehicle driven by his wife, he “began to record the proceedings”.

The following is the exchange that took place between the complainant and the Constable. It was sent to Assistant Commissioner of Police Leon Bethell.

“It is not an offence, sir,” I responded

“I ain care what you is. Put down this phone or leave my scene, because you ain involve in this accident, right?” Constable 3494 said.

“It’s my vehicle, sir. It’s not an offence to record the police,” I repeated.

“It’s not an offence,” I assured him.

“Put up the phone, let me see some ID,” Constable 3494 again demanded.

“Would you like me to call the Commissioner of Police?” I asked.

“Let me see some ID,” the officer again demanded.

“Let me see some ID,” he again demanded.

The constable then purported to make a call for assistance based on the spurious claim that I was “creating a disturbance”. I cautioned him not to do that. I advised that I am employed by the Office of _ and am fully aware of rights afforded me.

The constable again asked for my identification. I refused.

At that moment, police vehicle 101, licence plate 265916 arrived with klaxon on. That vehicle was being driven by Corporal 2550.

“I tell this fellow I need to see some ID,” Constable 3494 spoke to Corporal 2550 who demanded that I “put the camera up”. I refused whereupon he lunged toward me and attempted to take my phone. He, with the assistance of Constable 3736, accosted me, holding on to my right arm, twisting it behind my back and throwing me on to the trunk of the police vehicle. This action, linked to my refusal to “put the camera up” was an assault.

“Another police vehicle arrived. The Corporal driving that vehicle got out and advised Corporal 2550 to release me.

“Subsequently, Inspector Mitchell arrived upon the scene, followed by Superintendent Craig Stubbs. I wish to commend the latter for his handling of the matter.

I indicated that I was prepared to drop the matter upon receipt of an apology before the officers departed the scene.

“I received an equivocal apology, which I consider no apology, from Constable 3494. No apology was forthcoming from Corporal 2550 or Constable 3736.

Again, I am prepared to drop the matter if the proper apologies are made, in writing, from the officers.

“If otherwise, you may consider this the initiation of a complaint against the three identified officers. Also, this is without prejudice to the seeking other remedies.

“Please be assured of my continued support for the Commissioner of Police, the Directorate of The Royal Bahamas Police Force and the fine men and women who serve thereunder,” the complainant said in closing his statement to the police on the incident.

Having heard nothing about his complaint, the government official, wrote another letter on October 28, 2015. This one was also addressed to Assistant Commissioner of Police Leon Bethell. It said:

“Re: Conduct of Police Officers

“I refer to incident of assault by three police officers on 11 September, 2015.

“You have not favoured me with a reply in this matter.”

The complaining government official having then spoken to DCP Anthony Ferguson by phone, and having been assured by him of “investigation” of the matter, never heard from him again.

“He neither answered my phone calls nor responded to my emails,” said the complainant.

A year later – July 8, 2016 – he reminded Mr Ferguson: “I have phoned you several times, and have left messages on your voice mail. I have had no response.”

The complainant emphasised that he wanted the matter “resolved amicably,” seeking only a written apology from the officers involved.

That was four years ago and still no apology or explanation for the official silence.

We will see what happens with Mr Dames’ promise of “no cover up” in the case of the two girls allegedly beaten in Exuma.