Davis: Why Secrecy On Bpl Deals? 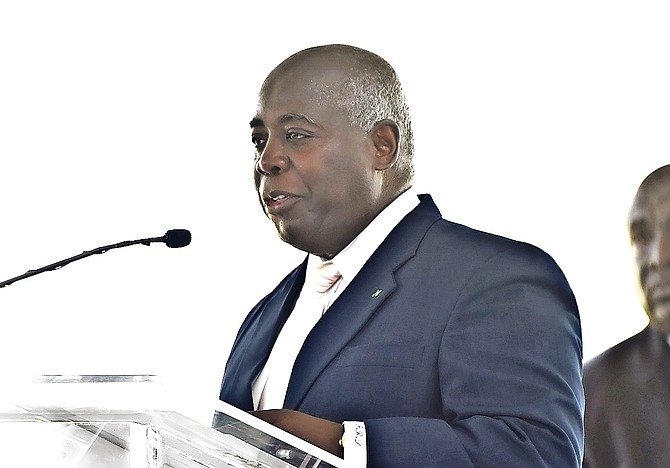 A REVELATION that Bahamas Power and Light is effectively sworn to secrecy over certain portions of agreements it has entered into with Shell North America and Wärtsilä is “concerning”, according to Official Opposition leader Philip Brave Davis yesterday.

The Progressive Liberal Party leader said as this directly involves a government entity, all documents should be made public as “tax payers deserve to know how their money is being spent”.

He said had the PLP been the government, there would have been outrage about such a revelation.

On Sunday, BPL chairman Donovan Moxey admitted that the power provider had signed nondisclosure agreements with both companies, but seemed to downplay the issue noting that the Utilities Regulation & Competition Authority was well aware of what was contained in both deals.

The revelation came as Mr Moxey insisted that it was Shell who executed its own procurement process and selected Wärtsilä to construct BPL’s new $95m Station A plant at Clifton Pier.

Edmund Phillips, Wärtsilä business development manager, on Sunday further insisted he had records to support Shell’s decision to choose the company after it was noted that at no time has the oil company publicly stated its support for the Finnish corporation, which manufactures and services power sources and other equipment.

However Mr Davis claimed he had received information that suggested otherwise.

“I challenge them on that and I say to them I am advised that they wrote to Shell,” Mr Davis claimed during an interview yesterday. “They wrote to Shell directing Shell to engage Wärtsilä because Wärtsilä is not Shell’s preferred procurement agent.”

Regarding the NDAs, the Cat Island, Rum Cay and San Salvador MP said: “It’s unacceptable and concerning that they allowed a nondisclosure agreement to be signed.

“What would they say if it were the PLP saying they signed a nondisclosure agreement? So they need to come clean. Tell the public what’s going on. Let us know.”

“The broader issues of political cronyism, ineptitude, mismanagement, corruption and the lack of transparency and accountability in the general stewardship of public assets in the public’s interest strike at the core, the root and source of this current national energy crisis,” Mr Davis said Sunday.

“Further, the prime minister and his minister for BPL must not and will not be allowed to conveniently sweep all of these breaches of public trust under the proverbial carpet.

“Make no mistake about it, this current BPL crisis is unwittingly a Hubert Minnis construct an orchestrated crisis simply because he failed to place the interests of the Bahamian people above his narrow, hidden, personal and political interests and agendas.”

As a result Mr Davis said the misery index among Bahamians has increased.

Mr Davis said: “After all of the touring and explanations by BPL this afternoon (Sunday), the power is still off and there is no end in sight to the power cuts.

“This afternoon throughout the island of new Providence, the power is off in large swaths of neighbourhoods. As a result, people cannot manage their business affairs because there is no predictability or certainty about the power supply. This is harmful to the economy.

“Further, there is darkness at night, heat during the day and night, the misery index has risen exponentially and in the face of all this, all the minister can do is blame the PLP while the prime minister is busy shaking cowbells. It is clear that they don’t care about us,” he said.

It So sad, this problem just started 2 years ago under an FNM government. Nassau always had light before 2 years ago. the Government should be fired!!!

“The broader issues of political cronyism, ineptitude, mismanagement, corruption and the lack of transparency and accountability in the general stewardship of public assets in the public’s interest strike at the core, the root and source of this current national energy crisis,” Mr Davis said Sunday."

Mr. Davis, you and your party know ALL about that, don't you?

Why oh why do these newspaper give voice to writing about he nonsense spewing form the mouth of Davis. It is despicable to open one's mouth when you were one who help to create the problems we now have. This didn't just start. This was happening for decades. Why do people like to printed this just started yesterday and make it political. If Davis was a real leader with vision and genuine concern for the Bahamian people, he would offer real and tangible solutions to the problem, But just complaining shows that he just a typical lame politician trying to score browning points. That tired type of person needs to sit down. Not needed, thank you.

The stench of corruption here is most sickening.....and our dimwitted PM Minnis sits at the top of it all. And to think he promised that a government led by him would be the most transparent one the country has ever had. In fact the very opposite has proven to be the case!

Phillip Davis can't speak on this.He did not bite his tongue.He still has not given an explanation about the contractor's insurance on the Bamsi fire.Go away ,just go Brave.