Loving Those Who Forget 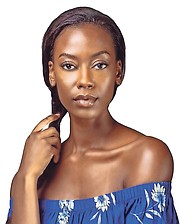 TAREA Sturrup, a local fashion model and marketeer, is using her platform to raise awareness of dementia - a condition her 76-year-old grandmother and numerous other elderly Bahamians are struggling with.

The aspiring philanthropist, who is signed with Choice Model Management, knows first-hand the challenges those living with dementia and their loved ones experience.

Her grandmother, Myrtle Scavella, was diagnosed with dementia three years ago. Up until then, Tarea had no clue as to what was happening to her grandmother. But once the diagnosis was official, she decided to educate herself on the disease and realised in hindsight that her grandmother had been displaying symptoms for a long time.

Motivated by love, Tarea is unfailingly patient with her grandmother.

"Symptoms showed themselves long before my family and I took notice," she told Tribune Woman.

Early detection is important for treatment and the potential slowing down of the progression of the disease. This is a message Tarea hopes to get across to her fellow Bahamians.

Dementia is the loss of cognitive functions -- thinking, remembering and reasoning-- and behavioral abilities, to such an extent that it interferes with a person's daily life and activities. These functions include memory, language skills, visual perception, problem-solving, self-management, and the ability to focus and pay attention.

"The Bahamian elderly population sports an extremely high diagnosis rate of dementia, but it is an ailment that is not commonly discussed in our society. I would like Bahamians to embrace our realities, take active steps to improve quality of life for those suffering with dementia," she said.

Since she returned home from the United States, Tarea has been helping her family provide the much needed support and care her grandmother requires.

"Caregiving support and therapy groups are needed for both employed caregivers and family members; specialised daycares for patients would be ideal, and I believe our country is long overdue for a dementia association that can actively contribute to research efforts to find the true cause and cure of dementia in it's various forms. We have to be a part of a health movement that takes care of not only this generation, but many more generations of Bahamians to come," she said.

The effects of dementia vary amongst patients, but her grandmother experiences mood swings and disinterest in activities midway through them.

"However, some things have not changed, like her love for her family, her amazing sense of humour, and her love for music."

Tarea said her grandmother regularly sees a specialist who monitors brain activity and overall cognitive responses. She also has great caretakers in her children and grandchildren, who actively participate in activities geared toward mental stimulation and memory retention.

"We often research natural products that support brain health and we constantly look for new developments in the medical industry to support her condition. Unfortunately, there is no cure for dementia," she said.

"Initially, it was really difficult for me to adapt to seeing my fierce grandmother in such a submissive light as she was notoriously independent during my adolescent years. However, patience is something I've learned very quickly when spending time with her. Patience and thankfulness are important to focus on."

Taking care of a relative with dementia has been a challenge, but it is one Tarea and her family gladly accepts.

"No day is alike. What worked yesterday may not work today. Some days it feels as though nothing is wrong and other days the frustration she feels is palpable. Because I love her so deeply, the hard days are extremely painful to watch and endure. But the gratification of the good days surpass everything," she said.

"The dynamics in my family have changed forever. We are much closer than we were before, far more versed in medical knowledge, have become adamantly health conscious, and are very practical in our functionality. We are also very honest with how we are feeling, as emotional strain is very common in caregiving, so it is very important to take turns and to be fair with one another. We have also become very forgiving and treat both my grandmother and grandfather with great honour and respect."