One Fatality, Two Injured In Shooting 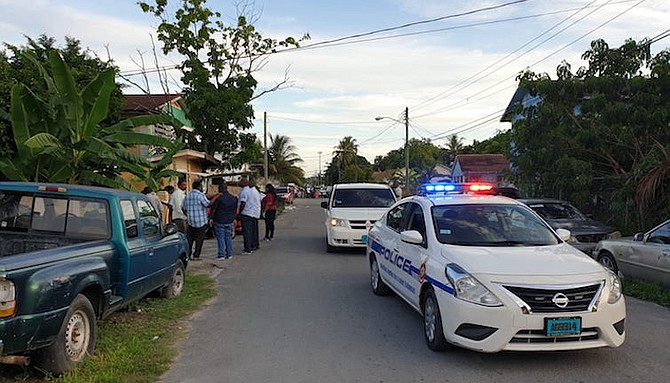 Police at the scene of the shooting. Photo: Terrel W Carey/Tribune staff

This is the 55th murder for the year, according to this newspaper’s records.

Assistant Superintendent of Police Shanta Knowles said two people armed with firearms approached a group of men sitting in a yard and discharged their weapons in their direction.

She said two of the victims were transported to hospital where they were in stable condition.

ASP Knowles said one of the victims was known to police. “We are very early with this investigation,” she added. “We know that in the cool of the afternoon persons would have been outside and we’re asking anyone who has information that might assist us with this investigation to please give us a call. Use the Crime Stoppers line, 328-TIPS. We have a P3 system. Go to your (Google) Play Store, download the P3 application, click on country Bahamas and of course fill out the information. There is no need to put in an email address, your name, telephone, nothing, just give us the information.”

ASP Knowles said there were no reports that children were around when the shooting happened. “In the cool of the afternoon, there may have been children out but we don’t have information that they were present at the time,” she said.

This is the fifth murder this month.

In 2018, there were five murders in the entire month of August. Overall, murders are down ten percent compared to this time last year. Yesterday’s incident was the first murder since an unidentified man was found with gunshot woulds outside a building off Blue Hill Road on Tuesday, August 6.

BPL is making this too easy for gangsters. Keep the power on and the rates low and people can hang out inside their homes instead.