Peter Young: The Man To Deliver Brexit Or Is Boris Just Full Of Flashy Hogwash? 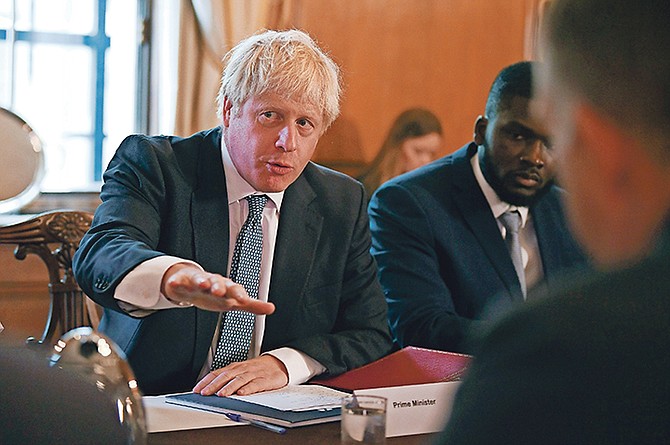 Mr Johnson has hit the ground running after barely three weeks in office.

In last week’s column, I surmised that Britain was in for an autumn of political disruption over Brexit. The nation has been overwhelmed by this thorniest of issues that has provoked deep divisions and the resulting uncertainty and instability could become even worse. The chaos in the Westminster Parliament during recent months threatens to develop into even greater political upheaval as the deadline of October 31 - by which date the UK is due to leave the European Union - fast approaches. According to the doom-mongers, whose predictions seem to be becoming more and more hysterical, there is even a danger of the country plunging into the deadliest crisis of its modern history.

Perhaps they are right, since the likelihood of Britain’s EU departure without a deal is increasing by the day. The new Prime Minister, Boris Johnson, has made it clear he is prepared to do this despite the almost inevitable widespread economic disruption and related consequences including higher inflation, a damaging recession and a weakened currency. He would also be overriding a Parliament that for three years has refused to allow Brexit - for which a majority of the British people voted in the 2016 referendum to happen - and will clearly do all it can to prevent a no-deal exit. A former Tory deputy prime minister has described such an exit as a ‘grotesque act of national self-harm’.

The possibility of a no-deal Brexit was recognised, of course, from the beginning of this whole saga when Mr Johnson’s predecessor, Theresa May, famously said after the referendum that no deal was better than a bad deal. However, she failed to keep to that commitment by ignoring the original deadline of March 29 that had been set when Britain invoked Article 50 of the Lisbon Treaty. Her Withdrawal Agreement with the EU was rejected by the House of Commons on three separate occasions because it was judged to be a bad deal and she was eventually forced out of office. With the benefit of hindsight, her admirable qualities of doggedness and perseverance became a hindrance when perhaps more effective political and diplomatic skills were needed to secure a deal from an uncooperative EU that would be acceptable to a majority of MPs.

Despite the end of Mrs May’s premiership and the emergence of Mr Johnson as the Tory leader, the Conservative Party remains in disarray over Europe and, reportedly, internal discipline has broken down. The question now is whether these divisions are so deeply entrenched that they cannot be healed by a new leader famous for his supposed ability to bring people together. Can he also reunite a divided nation portrayed as being in decline, let alone his own Party?

There is little doubt Mr Johnson has hit the ground running after barely three weeks in office. He is seen as being on the rampage with enthusiasm, energy and optimism and wants the UK to free itself from the shackles of the EU and bring on a new so-called golden age while taking control again of its laws, its borders and its money. Some regard this as refreshing and intoxicating after the dullness and predictability of the May years, but sceptics consider it to be hogwash and wishful thinking as well as naïve showboating for political gain. They also think Mr Johnson is flashy, unreliable and lacking in judgement. Certainly, even his supporters admit he has a less than stellar record for reliability in both his personal and public life. He was judged to have been a successful two-term Mayor of London but not a good Foreign Secretary because of a lack of attention to detail and a tendency to speak carelessly.

After returning from his audience with The Queen on becoming Prime Minister he delivered an optimistic and bullish speech in the House of Commons, designed apparently to overcome despondency and pessimism and, in his own words, a ‘diet of miserablism’ and a ‘computer says no’ approach in government.

He was chosen as leader by his own party as an instinctive social liberal and the person with the best chance of delivering Brexit and of defeating the hard-left leader of the Labour Party in a General Election. But to win an election he also needs to develop new domestic policies based on Conservative values and maintain the Tories as a broadly based party of government.

My own view is he may be a flawed figure like most politicians but he is the most likely among existing senior Tories to push through Brexit and lead Britain to that promised period of prosperity. But, if he fails in that and also proves incapable of governing on a wider front, he could be the shortest serving prime minister in British history.

Mr Johnson has made it clear a no-deal Brexit should be avoided if at all possible. But, in the face of a refusal so far by the EU to reopen the Withdrawal Agreement, he is gambling Brussels will eventually meet at least some of his demands to reform it, including dropping the Irish backstop altogether, so that an orderly exit and implementation period can be agreed. Meanwhile, in facing the reality of continuing intransigence by Brussels, his government is preparing for a no-deal by introducing measures, including appropriate financial support, to mitigate disruption and help businesses adjust to more restricted access to European markets.

So, what will happen next? There remains the possibility the EU will compromise, since its member states will surely wish to keep the disruption of trade with Britain to a minimum post-Brexit. Mr Johnson and his ministerial colleagues have not rushed off to Brussels as supplicants but presumably discussions are going on at official level. There appears to be a slight lull while MPs are away on their summer holidays. But by early September there will be a fresh locking of horns with MPs looking for ways to block a no-deal withdrawal. There is also speculation in the UK press about an early no-confidence vote against the Prime Minister since Remainers fear a General Election may well not be called until after Britain has left the EU on October 31.

Britain remains dangerously split and on a cliff edge of uncertainty. The coming weeks and months will be crucial as the nation’s political leaders will be under the most intense scrutiny.

So much has been said and written about the recent electricity failures that I hesitate to add to the debate. Suffice it to say outsiders like me, who know The Bahamas well, live here and have grown to love the country, do not understand how the problem of an unreliable power supply has bedevilled it for so long. Load shedding has always caused maximum inconvenience - after returning to Nassau recently, we have experienced outages lasting up to four hours every day or night.

In a relatively wealthy and sophisticated country like The Bahamas, dependent on its first class tourism industry that itself produces huge tax revenue, surely it should be an absolute priority to guarantee a regular power supply. It is essential in a modern and successful economy. Even though the hotels and more wealthy residents will have their own generators, businesses and individuals alike are affected in one way or another and the poor, in particular, are left to suffer.

At the risk of oversimplifying the issue, if the existing central power supply is insufficient or the infrastructure is too old to function properly, why was new generating capacity not installed when it became necessary?

I hate to hear criticism of this great country and I am sure many would join me in saying we are genuinely mystified that this situation, which we are told could last for months, has not been addressed adequately in the past. The latest information about a new power plant coming in to service by December is welcome. But could not this crisis have been averted by careful forward planning and regular investment in such an important industrial sector?

Vladimir Putin spoke at length about what he termed the “liberal idea”.

So did Mr Putin have a point?

Another topic of general interest being debated in England when my wife and I were there was the issue of liberalism that is at the heart of Western democracies. This arose from a recent interview in the Financial Times with Russian leader Vladimir Putin who spoke at length about what he termed the “liberal idea”.

He is quoted as saying the reason Mr Trump won the US presidency was that he realised the distribution of resources and the benefits of globalisation were seen by the middle class as unfair, and that because of liberal ideas about multiculturalism and open immigration the elite was neglecting the interests of the “core population”. Mr Putin considered the same was happening in Europe where the so-called liberal idea had come into conflict with the interests of the overwhelming majority of people.

Predictably, he has been castigated for these views because his own vision of society is coercive and seen as unjust. As an authoritarian leader and statist applying socialist concepts of control, he is in no position to pass judgement on Western ideals of liberty.

Much depends on the definition of liberal. The central theme of classical liberalism was the freedom of the individual from control by any central authority. But in America the term “liberal” has apparently become practically a synonym for “left wing” and people who believe the state is the answer to every private and public problem. Even in Britain, liberalism has somehow moved towards a position of intolerance  compared with the liberal idea that is supposed to be about freedom, order, impartiality and privacy - and a self-righteous doctrine that demands obedience and conformity of attitude. So perhaps Mr Putin has a point.

But everyone ought to benefit in a liberal society as it is traditionally understood, with the rule of law and due process, representative democracy, free markets and a free press. History has shown that such liberal values play a part in delivering successful wealth creation and - with limited regulation and government interference - lead to development of productive businesses and prosperity. It is such liberal values, with essential social and political freedom, that remain the cornerstone of Western democracies.