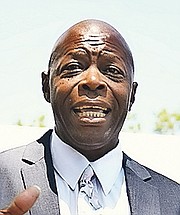 THE president of the Bahamas Unified Bus Drivers Union yesterday said his group is satisfied with the government's progress on issues of concern for the sector.

Mr Farrington said: "I met with the minister on Friday in reference to the withdrawal of service that we had July 3. The minister was quite angry that was the first time we met from then and he was more or less furious that we withdrew our services while he was out on vacation.

"Nevertheless, our message was clear and the outstanding concerns they now started to address them. If you look at Market Street, Market Street is completed with the bus stop signs. They actually have them painted in the road now we are just waiting on the pole and signage."

He added: "In the Bay Street area on the eastern side they are starting to put bus stops down also on Mackey Street putting the bus stops down. It is a sub-contractor that are doing the signs, so the Ministry of Works now have to come behind them for the signs and pole."

Mr Ferguson said Minister of Transport Renward Wells was open-minded about their concerns relating to a proposed bus fare increase and the fact there is no bathroom facility for bus drivers.

"The minister willing to work along with us in terms of our concerns. It's now up to the union now to put pen to paper," he explained.

He added: "But he did mention that the budget for this year has already passed so (we're) looking at for these things to actually be in place for the next July budget. That's for the shelters and anything concerning money, those things for sure has to do with the next budget. For sure the increase and all those other concerns will be addressed shortly."

In May, the union threatened to take legal and industrial action against the government if bus drivers' concerns aren't dealt with.

Speaking at Long Wharf Beach at the time, Mr Farrington called for the moratorium to be lifted on bus plates.

"We also have an issue that was going on for decades with the plates for the buses with the franchise. We have a lot of jitney drivers are now becoming bus owners, we have a lot of franchise holders do not have buses. This is fundamentally wrong how the system is set up with the leasing of these plates. We need this to be addressed," he said.

In July, jitney drivers withdrew their services after government officials failed to meet with the BUBDU before their July 1 deadline.

The BUBDU president said the action was just "the tip of the iceberg and a full-fledged strike" may occur in the near future if their concerns aren't heard.