The Alicia Wallace Column: Let Us Know When The Lights Are Going Off And At Least We Can Plan Around It 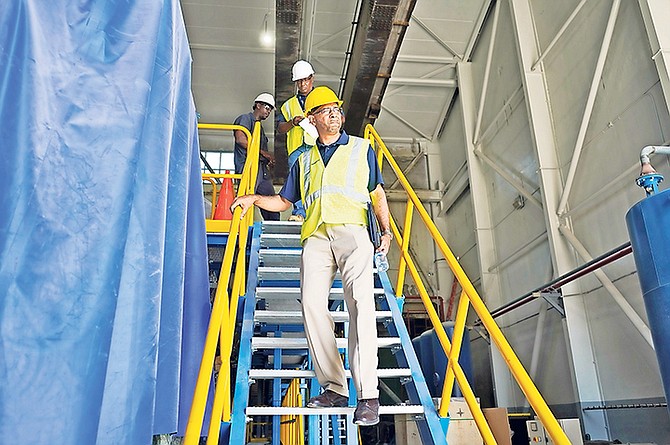 Bahamas Power and Light held a press conference on Sunday, and while many of us tuned in, none of us have better information that we had before.

It does not seem as though anyone is particularly surprised by the emptiness of the statements, but we are still frustrated by the apparent lack of interest to improve the service. We are experienced in electricity outages enough to know we should keep our devices charged, know the location of flashlights, have data on our phones and have a mental list of ways to keep cool.

We are not experienced enough to be unbothered when we get home to no electricity, or suffer an outage in the middle of a task that depends on electricity. There is no acclimating to inconvenience, especially when it costs us money in addition to time and comfort.

We have no sympathy for the people at BPL and their struggle to use whatever expertise they have to solve the power generation problem because their communication leaves far too much to be desired. We understand the current equipment cannot meet the demand. We have heard BPL is working to remedy the situation with rentals and purchases.

We know how numbers work, so it is easy to understand a power demand of ten cannot be met by a power supply of six, and that when the demand for power exceeds the supply, some people will have to be cut off. It makes sense to share this among every part of the island for some semblance of fairness, but there is no way for load shedding to be fair. It can, however, be done in a way that shows consideration for people who need and are accustomed to their electricity demand being met and the aspects of their lives that depend on it. There needs to be a schedule. There is no getting around it.

If we know when there is a possibility of an outage, we can have contingency plans in place. BPL continues to make Facebook posts announcing outages in areas they have already cut. This is not helpful. We need to know in advance. In fact, there is no reason for BPL not to create a weekly schedule to let us know which areas may go off during particular intervals. It would not mean load shedding takes place during each one. It means we would know exactly which areas would be without electricity if the demand exceeds the supply during a certain period. A little consideration and planning could go a long way.

As citizens, we need to be setting agenda

Whatever our political affiliations, almost all of us agree the country is not progressing as we would like. It is not that we are not moving fast enough, rather that in certain areas there does not seem to be any movement at all. Add to that the reluctance of people in positions of power (our representatives) to effectively and meaningfully engage us as citizens (their employers), and the information gap widens.

While the Progressive Liberal Party and Democratic National Alliance complain about the Free National Movement’s lacklustre performance, they do not mount solid, evidence-based arguments. They, essentially, offer the same commentary we have in casual conversations and social media posts.

We are less than three years away from the next general election and have yet to see an effective response to anything from the opposition.

We complain about the current administration, but fail to hold other political parties to account. Any political party serious about its candidacy in 2022 should be consistently visible, training and exposing candidates and developing policies and plans. We do not need their criticism of BPL. We can do that ourselves. We want a solution to the problem.

We need to know who has what it takes to address this and other long standing problems. Conduct research. Consult with experts. Draft policy. Draft legislation. Engage the general public. We cannot let them think that sharing in our frustration is sufficient. Our votes and this country are worth more than that. If they do not have the time, commitment and creativity to advance solutions before being elected, they certainly will not bring change to positions that have been proven to change people instead.

How can we make the shift to renewable energy? What can we do to promote the Sustainable Development Goals and ensure civil society has the tools to measure progress? How do we assess, reintroduce and make improvements the RISE programme - meant to tackle poverty - that was discontinued by the Ministry of Social Services? What can be done to improve the statistics and quality of women’s political participation and how will the party model it? How can a mechanism be developed for ongoing civic participation, encouraging members of the public contribute ideas, ask questions, and directly engage representatives and one another?

There is no shortage of questions to ask political parties vying for leadership in 2022, and they have the benefit of time and the unpopularity of the current administration. We, as citizens, need to set the agenda. It is time for substance. We need to demand it.

For the past few years, I have been limiting my use of devices with backlights for at least one hour before bed and two hours after waking up. It has had great results, improving the quality of my sleep, giving me more time to develop and continue with proper routines and reducing the potential for stress and anxiety to shape my day or period of rest.

This has meant ignoring calls and messages which a few people close to me found unacceptable, but have since come to remember and respect (with the help of a Whatsapp status stating my restrictions). In recent months, I was more flexible with my rules for various reasons including friends and family members in different time zones, impending deadlines and a compromised sleep schedule.

Several days ago, my phone was updated and I explored the new features. One of them is the Digital Wellbeing menu which tracks the amount of time spent on the phone, shows which apps are in use, has the option to set a timer, and - my personal favourite - the “wind down” option. During hours I set this option, my phone switches to greyscale mode. It is much less attractive and stimulating and actually makes me work harder to select the app I want. It has been helpful in getting me back to my healthy digital rules.

Even if your phone does not have these features, there is probably an app that can perform the same functions. It is definitely worth a try for anyone trying to manage phone use or needing help with digital discipline.

Ms. Wallace, you state, "A little consideration and planning could go a long way." Proper planning prevents poor performance, the 5 "p" s of management. Could we have gotten to this point if any planning at all was in the BPL equation?