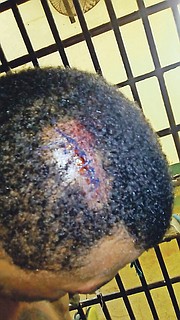 THE mother of a man jailed for armed robbery yesterday pleaded for her son’s safety as officials investigate claims he was severely beaten on the weekend.

Photos of a bloodied and bruised man, identified by relatives as 28-year-old Cordero Bethel, with a stitched gash on his head were circulated on social media yesterday. Several online forums alleged the injuries were sustained after Bethel was ganged by inmates; however, Commissioner Charles Murphy did not provide any details when asked by The Tribune. There are also allegations he was attacked by correctional officers.

“I got the same information,” Mr Murphy said, when asked about claims Bethel was beaten by prison officers. “I saw the picture on social media and an investigation is launched. We are awaiting the results of that,” Mr Murphy added.

However, Christine McPhee, his 49-year-old mother, told The Tribune the incident is the third time her son has been attacked at the prison. She claims the weekend incident involved both inmates and prison officers.

She said a formal complaint was never filed for any of the incidents for fear of reprisal, insisting she has been contacted personally by prison officers who told her Bethel would be killed by inmates if she made a report.

Ms McPhee said the latest incident has prompted her to take action as she could no longer remain silent about allegations of abuse.

“I think they just taking advantage of him,” she said, “this the third time. They keep beating him. The first two times, the first time it was inmates and the second time it was guards. I left it alone, he said ‘mommy leave it’ because they going to just come to him again.

“These gangs are on the inside and outside,” Ms McPhee continued. 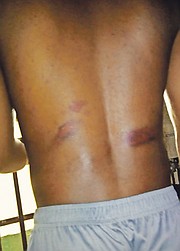 “He says ‘mommy I’m not in no gang.’ They were plotting, they were going to kill him because he told them he ain’t going in a gang. A prison officer call me himself and he say if you report this, they will go after him to try kill him.”

Bethel was sentenced in 2016 before Justice Vera Watkins after accepting a plea deal with Crown prosecutors for a double gunpoint robbery in 2013.

He robbed a man of his 2007 Honda Accord and an iPhone, and a woman of her Samsung Galaxy S4 device.

Bethel was sentenced to seven years on each count to take effect from the date he was taken into custody, March 3, 2014. The sentences will run concurrently.

Upon his release from the Department of Correctional Services, Bethel will be placed on two years’ probation.

Ms McPhee described her son as outspoken, adding she suspects this trait often put him at odds with correctional officers.

Ms McPhee said: “It’s been five years and they always bothering with him. If he go outside, other prisoners go in his cell and take all his things, and when he speak out they don’t do nothing about it. I told him leave it alone, I told him I’ll put money on his account to buy his stuff back.

“This happen now and it just getting worse,” she said.

“If they serving their time and being mistreated, then what else? He’s serving his time. They need to do a thorough check on officers they are employing.

“This time it really hit me because if you see the pictures with his head open up - no man. They could have killed my child. I’m going to press charges,” she added.

It's best to avoid all of these issues by STAYING OUT OF PRISON!!!!! Once you're in there I don't give a crap about you. Beatings, crappy food, boongying, suicide. I DON'T CARE!!!

Awww my ... thief and and a thug on the streets robbing innocent people at gunpoint, but now he's in jail with the real thugs he can't handle it. Maybe he should have thought twice before taking a gun and robbing someone.

Kml crying for his mommie like a baby... good for him.

And really Mom "they could have killed your child", what if your child had shot and killed those people he robbed at gunpoint? Where were you then to advise your bad boy son to behave himself?

Hmmm...the punishment is having your freedom taken away. It's not supposed to be a torture sentence

What about the ones who are tortured when held at gunpoint, not sure if you will live or die? What about the mental torture of reliving that experience?

That's the thing about lock down bro ain' no gun in there.....do the crime do the time