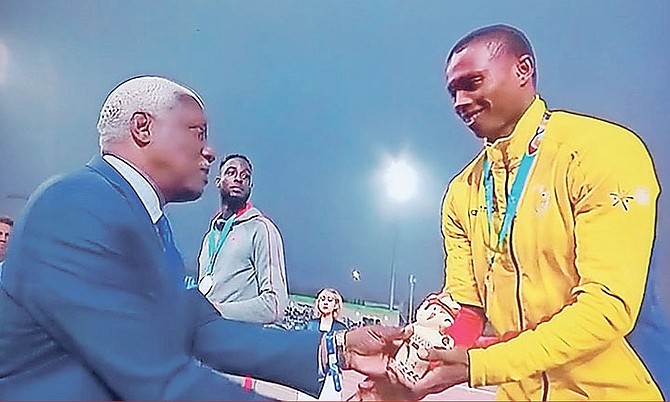 ALTHOUGH he won’t take office until after the International Amateur Athletic Federation’s Congress in Doha, Qatar next month, Mike Sands is making his presence felt as the new president of the North American, Central American and Caribbean Athletic Association.

Sands, the former Bahamas Association of Athletic Associations’ public relations officer and president, was elected to office during the NACAC Under-28 and Under-23 Championships in June during their Congress in Queretaro, Mexico.

He will replace Victor Lopez, who remains in the chair until the IAAF Congress.

“Initial talks have been taking place with outgoing president Victor Lopez,” said Sands on his return from the Pan American Games in Lima, Peru.

“We have consented to take a look at the (NACAC) office in Puerto Rico and meet with the staff and have a discussion about the relocation of the office.

“So, myself, along with the treasurer, Stephanie Hightower from the United States, and Alain Jean Pierre, the current treasurer, will visit the office in short order to determine what are the needs and how we are able to transfer the office here to Nassau.”

There are some other logistics surrounding the transfer of the office and its new location here that Sands said he was not at liberty to address at this time.

He said he would expect that because it’s for track and field, and he would hope that the office will be relocated in the vicinity of the Thomas A Robinson National Stadium.

During the Pan Am Games, Sands was called upon to make the medal presentation to the winners of the men’s 200 metres, which saw Alex Martinez of Ecuador win the gold in 20.27 seconds, Jereem Richards of Trinidad & Tobago take the silver in 20.38 and Yancarlos Martinez of the Dominican Republic get the bronze in 20.44.

“When they asked me, they were not aware that I was the bronze medallist at those games in 1975 in the 200m in Mexico City,” said Sands, who clocked 20.98 to trail gold medallist James Gilkes of Guyana (20.43) and American silver medallist Larry Brown (20.69).

“It just goes back to destiny and faith in how these things happen. There would have been no way that any of them would have known that, so when I told them, they said it was coincidental that it happened and it certainly did. So it brought back a lot of memories.”

As the new president of NACAC, Sands will have a big role to play in the IAAF as he will also sit around the table as a member of the Council in his capacity as the area representative.

“There’s a lot of work ahead because it has a dual role,” Sands said. “First of all, I am the president of the area, which constitutes some 35 member associations, including the United States, Canada, the North and Central America as well as Mexico.

“And of course, on top of that, it puts you in a seat on the IAAF Council, so I get to express the views of the area members and I get to negotiate on behalf of the area for the next four years.”

With the relocating of the office, Sands said he had been given the option by Lopez to have it remain in Puerto Rico or to bring it here, which is traditionally based on the island where the president resides.

“I have to meet with the relevant stakeholders to make it a reality,” he pointed out. “We haven’t reached that stage yet. I will be visiting Puerto Rico in short order to look at the arrangements there and what it will take if we relocate it here.”

Looking back at the performances at the Pan Am Games, Sands said he was disappointed in what transpired with Team Bahamas.

Sprinter Tynia Gaither captured the nation’s lone medal with a bronze in the women’s 200m in 22.76 behind Jamaica’s Shelly-Ann Fraser-Pryce’s gold medal record-breaking feat of 22.43 with Brazil’s Vitoria Rosa getting the silver in 22.62.

“I think there’s no question that the executives recognise it and I can’t speak for them, but I think we need to regroup,” Sands said.

“I think our performances overall were very lacklustre. I think we need to take a closer look at our standards and how do we keep the athletes focused in terms of maintaining their peaks and performing at a world-class standard. I think the performances were not as satisfactory as many would have liked them to be.”

Sands, voted in a day after he celebrated his 66th birthday, said he’s hoping that the performances will be much better at the IAAF World Championships in Doha, Qatar, September 27 to October 6 when he will take over as the new president of NACAC.