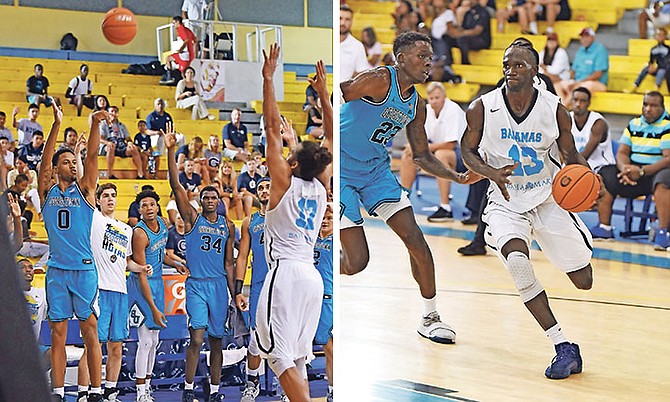 The Georgetown Hoyas were just a little too much for the under-sized Bahamas men’s national basketball team to handle. And it wasn’t any easier for the New Providence Basketball Association Select team as they got clobbered 135-60 by Memphis State Tigers.

Staying undefeated in the Bahamas Basketball Federation’s 2019 Summer of Thunder Basketball Tournament at the Kendal Isaacs Gymnasium, the Hoyas roughed up the Bahamas 91-61.

It was the first loss for the Bahamas men’s team after they won 63-57 over the Texas Tech Red Raiders the night before. Against Georgetown, new head coach Chris DeMarco said his Bahamian team got outclassed.

“They were physical, they were long, they can shoot. It’s difficult to lock into one thing that you can take away from them,” said DeMarco, an assistant coach from the former NBA champions Golden State Warriors who has taken over from Mario Bowleg, now the BBF president.

“They can play so many ways. But I was proud of us fighting back. We were down early in the first half, but we cut it down to about 14 at the half, but we just couldn’t get the offence to keep it close.”

That was exactly what happened because every spurt that the Bahamas mounted, Georgetown found an answer and eventually wore down the local national team inside to pull away for the easy win.

The Hoyas, coached by legendary Hall of Fame New York Knicks’ centre Patrick Ewing, was coming off a 112-53 blowout over the New Providence Basketball Association’s Select team on Wednesday night.

Facing a lot more seasoned players on the men’s national team, Ewing and his Hoyas kept their composure as they opened an impressive 27-7 first-quarter lead. They got outscored 18-12 in the second quarter, but held on for a 39-25 margin at the half.

Although the Bahamas tried to keep it close in the third, Georgetown used a 26-20 spurt to extend their lead to 65-45 going into the final quarter. In the fourth, the Hoyas opened as much as a 14-point lead and cruised to their second victory.

“I think the best is yet to come. We’re still working, we’re still trying to become the team that I think we can be,” Ewing said. “We have a lot of talent on this team. We can play a lot of different ways, so we’re just going to continue working.”

The Bahamas men’s national team will be back in action at 5pm Saturday when they take on Memphis State at the makeshift gymnasium in the Baha Mar ballroom as the tournament winds down.

“We just have to have the same type of energy that we had against Texas Tech the whole time,” said DeMarco as he looks ahead to their final game. “There wasn’t really a let up in that game.

Tonight, it just felt like when things went wrong, we didn’t respond in the right way. We hung our head. I feel our staff could have done a better job too.

“We just have to make sure that we are prepared against Memphis and just play with that same energy for the whole 40 minutes like we did against Texas Tech.”

St Fort said they came out a little sluggish at the start against Georgetown and he admitted that their size posed a lot of problems matching up inside.

But he said they are going to work on how to compensate for that going into their game against Memphis State.

“We love what he’s doing and the system he’s bringing,” St Fort said of DeMarco. “We’re just going to have to work through it.”

Memphis State roared to their second straight win with seven players in double figures as they roughed up the NPBA selects.