Miller-Uibo Snatches Another Win In 200m 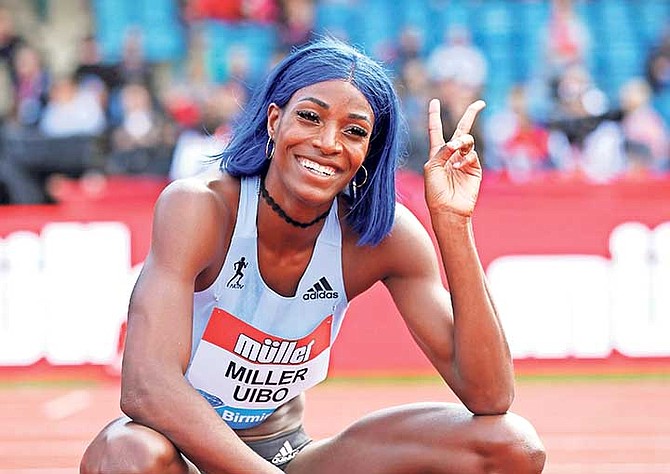 Off to a sluggish start yesterday, Miller-Uibo used her lanky, 6-foot-1 frame to power down the home stretch and took command of the race in the final 50 metres to clock 22.24 seconds for the victory.

Miller-Uibo’s time was off her season’s best of 22.09 but the Bahamian national record holder (21.88) said even though she expected a much better performance, she was satisfied with the victory.

“The race didn’t go to plan,” said the 25-year-old reigning Olympic 400m champion and World Championship 200m bronze medallist. “My start was just horrible and had to rely on that 400m speed to get through.”

Nonetheless, Miller-Uibo - the double Bahamian 200/400m national record holder - said she was delighted to put on a show for the crowd. The race was part of her preparation for the IAAF World Championships next month in Doha, Qatar.

“I’m feeling good. Before the race, we had an idea of how we wanted the race to go and it didn’t go as planned,” she added. “So I’m happy for the win and ready to move on to the next.”

Known for being more of a 200m specialist, sprinter Asher-Smith, 23, said her goal was also to win.

“I am really happy to have finished second in that race although having said that, I am a competitor, so obviously, I want to win every race,” said Asher-Smith, who was fourth at the last World Championships in the 200m.

“To maintain my form and finish strongly against arguably the best 400m runner in the world is good, so all in all, I am happy with that race.”

Even new mother Fraser-Pryce, better for her exploits in the 100m, said she too was thrilled about her performance, all things considered.

“You have to take one race at a time and I’m happy with the outcome of today,” stated Fraser-Pryce, the 32-year-old reigning two-time Olympic 100m champion from 2012 and 2008.

“I don’t think it was bad. I think it was a plus for me. I’m not a great 200m runner, but each time I line up, you never know because I’m ready to go out and attack.”

After six qualifying events in the race for the Diamond League Final, Asher-Smith holds the lead with 29 points, followed by Schippers with 28. Jamaican Elaine Thompson, the Olympic 100/200 gold medallist, sits in third place with 21.

Miller-Uibo, although undefeated in her two meetings this year, is in sixth place with 16 points. However, she has not contested a Diamond League 400m this year. The list is headed by Salwa Eid Naser of Bahrain with 32 points in four meets.

The only other Diamond League meet left is Paris, France on Saturday, August 24. That will take the top eight competitors into the pair of Diamond League finals in Zurich, Switzerland on August 29 and Brussels, Belgium, on September 6.

Following the Diamond League final, the focus will switch to the IAAF World Championships, scheduled for September 27 to October 6 in Doha when it is expected that Miller-Uibo will go after her first title in the 400m.

At the last World Championships in London, Miller-Uibo attempted a rare 200/400m double. However, she had a bizarre finish in the final 50m of the 400m and ended up fourth, but bounced back to secure the bronze in the 200m.