‘Bpl’S Neglect Will Be Fixed’ 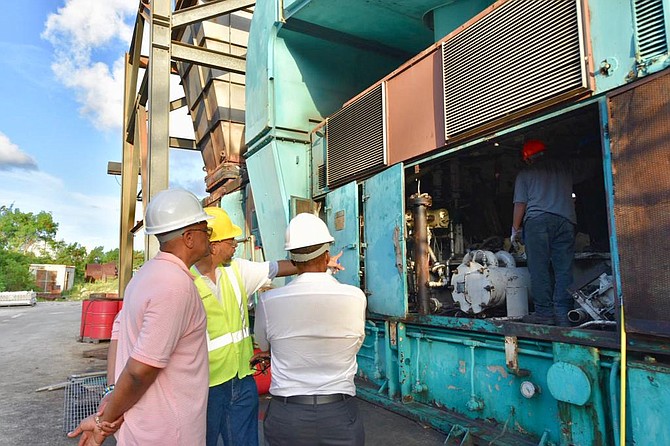 Former Deputy Prime Minister Frank Watson, who had responsibility for the Bahamas Electricity Corporation during the second Ingraham administration, challenged that characterisation yesterday, insisting the problem has never been nearly as bad as it is now.

Dr Minnis toured BPL’s Baillou and Clifton Pier plants on Sunday and expressed surprise yesterday at the dated, decaying equipment he observed. He also pledged the government will use all of its resources to fix the power generation problems.

“I was not cognizant of the challenges,” Dr Minnis told reporters while touring the University of The Bahamas.

“So we’re looking at more than 20 years of neglect and now we’re correcting those problems and we’re going to correct those once and for all. We’ve had similar problems with the dump and now we’re correcting that. Energy must be corrected and we will place all our energy, all our resources to ensure that we have not only short-term solutions, but that we have permanent solutions so you won’t experience this problem and your generation moving forward (won’t experience it either),” Dr Minnis said.

Mr Watson, nonetheless, said BEC made profits up to when the second Ingraham administration left office in 2002. BPL is a subsidiary of BEC.

He said the company has done a poor job maintaining its equipment and cited the 2003 decision of the first Christie administration to lower electricity rates as the genesis of BPL’s current problems. Michael Moss, executive chairman of BEC during the last Ingraham administration, has argued similarly. Although electricity rates were restored under his watch, he has said the damage was already done by then. The company’s legacy debt issue has prevented it from funding necessary upgrades.

Although power cuts have angered customers for decades, Mr Watson said: “I can’t think of anything during my period that was nearly as bad as today, nothing.”

The Nassau Guardian reported yesterday that BPL Chairman Dr Donovan Moxey has said the company could not afford to buy more rental generators to meet this summer’s demand.

Some have criticised Dr Minnis for not commenting on the generation woes earlier than he did. His first public comment came last week in a press statement.

BPL has been carrying out daily load shedding since June 19. Dr Minnis defended his silence yesterday, saying: “You and I know you speak when you get the facts. You analyse, you accumulate, you get all the necessary data, and when you get all those facts and are comfortable with the facts, then you speak out. You do not speak prematurely because when you do that, you have to retract.”

Some officials have shied away from using the word “crisis” to describe BPL’s predicament. For his part, the prime minister yesterday sought to distinguish between a genuine energy crisis on the island and crisis as felt by residents and businesses.

Their computers are still using floppy discs? OMG. I haven’t seen a floppy disc in 20 years. My grandchildren would look at a floppy disc the way you and I would have looked at a buggy whip. We’re generating power with equipment that should be in a museum.

I think our only hope is to buy a massive extension cord, about the thickness of a sewer pipe, and run it across the ocean and plug it in somewhere over in Florida.

Floppy disk is great, i thought they'd still be on punch cards

For the amount of money that has been spent on and by BEC/BPL over the past 15 years, these disruptions in power supply should NEVER happen!

Our only hope to fix BPL long term is to PRIVATIZE. Everything else is madness. We have suffered through 50 years of unending corruption, stupidity, indifference, incompetence and lack of accountability. PRIVATIZE!

I think the floppy discs reference was an analogy to the general age and state of the plants. All these has been former contributing Politicians and "experts" aught to shut up and hang heads in shame. Contributing Negligence, incompetence, avarice and sloth.

Gawd, I hope you’re right, Oracle ... but his quote didn’t sound like a metaphor to me. It sounded like he was talking about something he’d actually seen.

TALENT and government in the same phrase....Jokes !!!!! There is no talent ...just sell this shitty company....Privatization is the way to go..why hold on to something that is no good and not making money.someone please tell me why

Simple. Because energy is of national importance. Calling for privatization is merely a call for a money hungry entity to buy the company, strip its assets, work its employees harder and squeeze the consumer even more, while adding profits on top of that. A government (people) owned company can hire the very same talented managers to run this company successfully, fairly, profitably, and for the benefit of this nation. was it such a wise decision to privatize BTC? So, what is different here? Intellectual laziness is the rule of the day.

How’s that working so far?

“I was not cognizant of the challenges,” Dr Minnis told reporters while touring the University of The Bahamas.

That says it all for me. Case closed on Minnis's legacy as the most incompetent PM the Bahamas has ever had. Minnis's self-absorption with what's important to him and his cronies has left him totally detached from what's most important to our country and its people. And to think his general election campaign slogan was: "If I become PM, it will be the people's time."

P.S. Someone influential please whisper in his Minnis's ear (not his deaf ear) that New Providence is on the verge of a potable water crisis. Minnis has always claimed his government can walk and chew gum at the same time, but he has yet to prove it. It certainly seems he's totally incapable of juggling more than one ball at a time ...... and it's never the right ball from a properly focused and prioritized standpoint!

Please let us be honest with each other on this issue of the performance of BPL and the frequent power outages. The corporation was well on its way to addressing all the issues impacting on its performance when the PLP came to power. Every employee, manager, supervisor as well as all unions were involved in a Transformation Project. When the late Bradley Roberts became Chairman of the Board he abruptly and without rhyme or reason, other than appointing PLP supporters, terminated this Transformation Project.

The problem we have in this country is that we continuously cut off our noses to spite our faces.

This issue of frequent power outages is a very simple problem to solve. The Union is hell bent on sabotaging the operations of the company so the blame can be laid on the FNM.

This issue of power reliability is a bi-partisan issue. And irrespective of which party is in office the nation needs reliable power to be competitive, productive and deliver the world class tourism product we are known for.

The Government should revisit the Transformation Project and put the recommendations and strategies in place. This is the solution. No privatization or outsourcing will solve this problem.

The colony's comrade "pink shirt" prime minister got it right, well almost, but he failed mention about BPL's (BEC's) woes constitute an “emergency situation” helped along by the more than 15 years plus 829 days of Imperialists red shirts governing neglect, yes, no ,,,, this is by far not a sole PLP thing ..... In fact, no former PLP board member has ever received Fox Hill Prison jail sentence taking under table bribes ...... not alleged but sentenced serve time in prison cell up at Fox Hill Prison ....