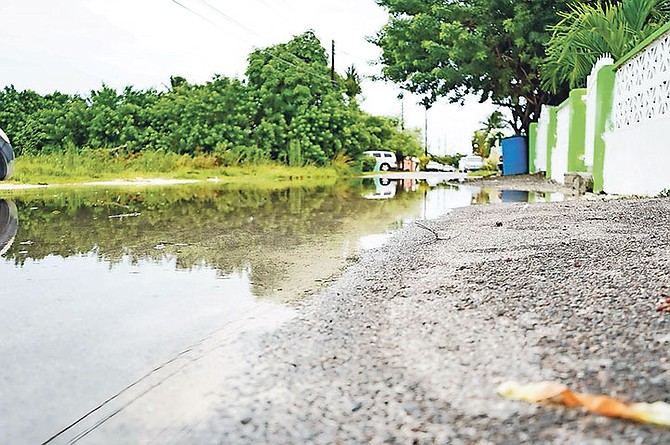 Flooding in Pinewood on Tuesday - an issue that has affected the community for many years. Photos: Terrel W Carey/Tribune Staff

ADMITTING the chronic flooding in Pinewood is a “historic issue”, area MP Reuben Rahming yesterday confirmed additional drains will be placed in the constituency.

While he could not provide a timeline, Mr Rahming noted drains are not a “panacea” for this issue. He added it could take up to an estimated $10m to address the flooding issue in Pinewood — money which cannot be allocated at this time.

Mr Rahming said this is due to the country’s economic reality and adding he is therefore being “reasonable” about the matter.

Yesterday, The Tribune canvassed the Pinewood community and noticed the significant flooding due to the recent rains.

Cars driving through floodwater in Pinewood.

Pinewood resident Prince Stubbs said he is “frustrated” with the issue.

“I been frustrated from I been living through here - over 20-something years,” he said.

When asked if the government has made any improvement to the drainage system, he replied: “Not round here, not what I know about. They need to put in some lift stations - couple of big pumps what pull the water and send it straight to the sea. That’s what they need to put in. Otherwise, this ain’ ga stop. And the government ain’ doing nothing.

“I vote FNM all my life and right now my mind ain’t to voting for them right now. Until they fix (this) situation and fix the situation with (Bahamas Power and Light) BPL.”

Mr Rahming was present in the community during The Tribune’s visit.

When asked about the flooding, he replied: “Yes it is an historic issue and you know sometimes when you get into something you see the wider scope and it’s not just only impacting Pinewood, it’s impacting a number of areas throughout New Providence.

“I don’t like fanfare with things. I like to do work first. It’s been going on as it relate to real proper assessment and a proper plan for the drainage facility here in Pinewood to address that.”

Mr Rahming noted he discussed this matter in July during his last address to the House of Assembly.

“One of my chief concerns: I know where we’re at as a country right now and I’ve been hearing estimates of up to $10m just to address this matter. But one of my major concerns was to ensure that in this budget that the monies would have been allotted to complete the survey and the assessment.

“I don’t say too much about it because people have heard survey and assessment before, but we need to know exactly where we are and I’ve stated publicly what my position will be in terms of ensuring that the government does its best to address the overall matter.”

The area MP also noted he engages with the Ministry of Public Works on a regular basis.

“There will be a few additional drains placed in Pinewood. That is being rectified, ratified right now and I must say it is not a panacea.

“Drains aren’t the ideal thing in this area, because of the height of the water table and other factors, but my concern is if it could help keep the water down one more inch, let’s just do it until we can find a better solution.

“We’ve been following that, making sure that the drains were properly purged and they were blown out within the last 90 days. We follow through with that to make sure the 88 drains in Pinewood have been properly addressed.

“We wanted to make sure that with the new asphalt paving, that the water flows reasonably. There are some areas where (they) are still settling because when you move the road you move the flow.”

“The (Ministry of) Public Works is addressing the concern because I inspect them myself, ensuring that the filter baskets are placed in these wells because none of the wells have filter baskets.

“So those boxes have been ordered, they were constructed (and) they’re here and I’m waiting on a timeline for them to be installed.”

Regarding the $10m, Mr Rahming underscored it cannot be allocated at this time due to the country’s “anaemic” economic reality.

“Right now we need money for every single thing. I try to be a reasonable man. My point is, and I’ve stated this publicly, I understand where we’re at. I’m fighting for an improved economy, but don’t forget Pinewood. I understand we have to delay some things and so and so forth but in the meantime, alright set the money aside, let’s finish the plan.”

Regarding the additional drains, Mr Rahming said: “Additional (drains) in critical areas are going to be done.”

When asked for a timeline, he said: “That’s (Ministry of) Public Works. I spoke to him, that’s being allocated.”

The history of Pinewood is that it was originally proposed for an upscale subdivision like Sea Breeze. After the developers found the area was prone to flooding, the made the lots smaller and sold them to poor, unsuspecting Bahamians. The effects of flooding in the area could have been minimal if the developer had raised the foundations of the houses one or two blocks higher than they are now and at least the homes would stay dry even when the rotate flooded. And because many of the houses are prefabricated with concrete roofs it would be extremely expensive for homeowners to attempt to raise their foundations now.. so the best alternatives now are passive drainage systems or collection wells with pumps

Not true, if you look at old maps of The Bahamas, Pinewood was actually a part of a ridge that extends all the way to Prospect Ridge. In fact some parts of Pinewood are still elevated and on the ridge.

It was unscrupulous land developers that saw an opportunity to mine for fill that caused Pinewood areas to be so low lying. Some say it was Arawak Homes that did it, some say government, but who knows.

When you combine flooding, power cuts and breeding mosquitoes you have a recipe for disaster!

Good point, but dont blame all the breeding on mosquitos.

We still flooding on Bay St and the dimwits havent figured out how to hook up an industrial pump with the harbour right there - child, yall just gats waiting to do. Not even on the radar.