'We Shouldn't Have Hired Us Team To Fix Power Issues' 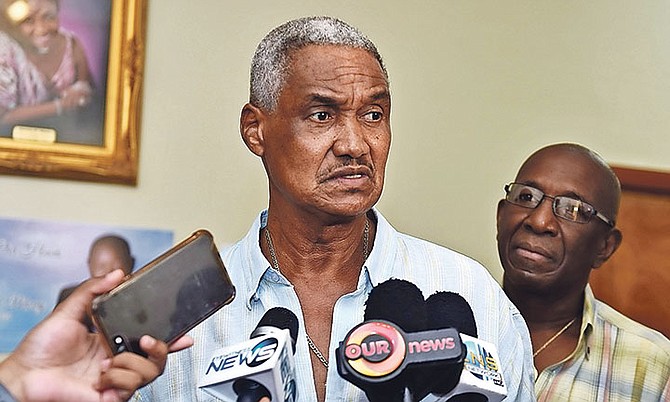 A FORMER Bahamas Electricity Corporation chairman yesterday slammed the government's decision to hire a six-man team of American specialists to address the power generation issues at Bahamas Power and Light.

Leslie Miller, a former MP and Cabinet minister, said the government's decision to bring in specialists from the United States "made no sense."

Mr Miller explained: "The engines are European made engines; they're not American engines, so those guys only came for a trip to look around. That's all they came for, that's the facts. We have to get it right.

"Nothing like this could have happened under the watch of Mr Davis who is in charge," he said, referring to former Minister of Works Philip Davis. "He would have not allowed it to happen because the first thing he would have said was 'Leslie get the team, get the guys out of Europe, come here immediately and let's get these engines back up and running.' That's what you do and that's what he did."

He added: "He told them from the beginning get Clifton right and we did for $15m to $20m and you all can speak for yourself. You had little problems after we been there for about six months - little problems. That was because the minister made us do what was necessary. He gave us the funding to get it done and that's what you have to do as a government."

When asked what he would have done to resolve the problem, Mr Miller said: "Start off where the problem started get you two engines fixed."

"These guys had two and a half years to do this you know but what happened the first board something went wrong with who they wanted to pick; you got rid of that board and so you are starting from scratch. It's the lack continuity to get things done properly."

He also expressed concern the government will borrow unnecessary money to prop up BPL.

"The minister of finance say they would spare no money, so he gone go crazy now, go borrow one $100m from the IDB which is right here in Nassau, do away with all our money that is not necessary," he speculated. "That's what gone happen now because they are panicking, don't panic. Get the engines fixed, get the guys from Europe and the Dominican Republic who we always get."

Finance Minister Peter Turnquest has not given a figure for possible borrowing to find a short-term fix for BPL's problems. A new $95 power plant is expected to come on stream in December.

BPL has been load shedding since June 19 and officials have said the problem could persist into the fall months.

However power generation issues have plagued BPL - a subsidiary of BEC - for decades. Load shedding and power cuts were a vexing concern during the last Christie administration, when Mr Miller served as executive chairman of BEC. However the Progressive Liberal Party has maintained it had plans in place for long-term solutions and has accused the Minnis administration of not following them.

He revealed that BPL officials briefed Cabinet about its short-term plan to provide relief to residents and businesses. That plan includes returning to service an additional nine megawatts of power from BPL's Aggreko units, he said.

He added: "A six-man team of specialists from Philadelphia Gear is here on New Providence. The team has started working with the intention of returning an additional 20 megawatts of power to service at the Baillou Hills Power Plant. For context, BPL's peak demand is 250 megawatts and is currently experiencing a 40-megawatt shortfall. BPL will notify the public as additional generation capacity is operational."

LOL, isn’t Brave Davis the fool who brought in the American company Power Secure in the first place to oversee BEC? Leslie Miller is clearly off his meds right now, he must have bit his tongue.

How come the fools are always to the front of the debates and offering solutions to the Countries problems? Don't they have another profession other than 'bullshitting the public for political support'?

It never ceases to amaze me how these PLP fellas left so many plans in place. "If only the new Government had followed them". They really think that the voters are fools.

Yeah someday they will realize we dont vote them in to make plans - but to make solutions.

LOL....Oh how quickly Leslie and Davis forgot that the voters are not as stupid as they are!

Things wouldn't have been better if BEC had been sold off to a private interest years ago? Correct me if I'm wrong but Cayman does not have load shedding as it has had privately owned power for years right? I mean at what we pay per KWH can't see how it could possibly be any worse. So you have the worst of all worlds as it is right now.

And with all the problems the world over with climate change why are we still talking about LNG? Or do we not care about climate anymore? And if we don't when are we renouncing the Paris Agreement we signed?

Cayman is still under the British, that is why their utilities still work. We have clearly become a failed state, incapable of running anything. SAD!

We should be very concerned with climate change because the Bahamas will become a reef. Costa Rica is now almost 100% renewable energy. It can be done.

so, Americans can't understand European technology? That's the first question that leaves all other statements from Potcake moot

How they gonna have a new plant come online in December when the cement foundation hasnt even been poured yet? The first I-beam hasnt been stood up. These guys have awesome imaginations - they should write cartoons for Disney or Marvel Comics.

Potcake is just an idiot snd should sit small.

Ask yourself: Why hasn't Minnis done anything about the fraudulent advances totalling well over $20 million that were made to Woman Smacker Miller by Bank of The Bahamas?