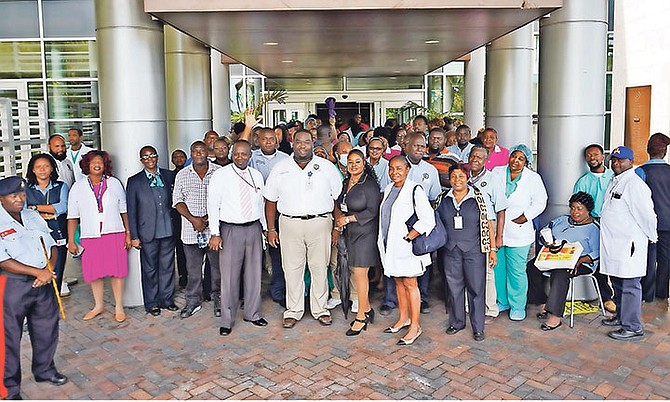 The scene on Wednesday at the junior doctors' strike.

THE junior doctors’ strike continued for a second day yesterday, despite their union having a “favourable” meeting with Prime Minister Dr Hubert Minnis on Wednesday.

Bahamas Doctors Union (BDU) President Dr Melisande Bassett called for public empathy as she insisted the BDU is standing up for workers’ rights – lest they end up being treated as “simple slaves”.

During a press conference held yesterday, Dr Bassett noted a meeting was planned with Health Minister Dr Duane Sands later that day and another with the Public Hospitals Authority on Monday. She said as it stands, doctors will not return to work until these matters are resolved.

Frustrated with a lack of resolution over longstanding disputes, more than 400 junior doctors went on strike Wednesday, forcing the nation’s public healthcare system into “emergency mode”.

Dr Bassett confirmed at the time that roughly 200 physicians were on call throughout the country and were resolved to only work on emergency cases.

Major issues the doctors face include lack of compensation for years of holiday pay, junior doctors being offered one-year contracts, and housing for interns being taken away.

“First of all, we’d like to thank the public for its patience and its tolerance while we exercise our current action to bring to a close a matter that’s been in existence since 2010,” Dr Bassett said yesterday. “I know it’s been said in the media that this is all about money, but I ask you to put yourselves in our position.”

Although she stressed the doctors’ frustration over lack of holiday pay, Dr Bassett made certain to note that the issue is not about “money” but about “principle”.

“This is a principle. This is a fundamental right that every Bahamian is afforded and the law - and it doesn’t matter whether it’s a private entity, the government, the laws are there to protect all Bahamians. They’re there to govern every Bahamian and how we behave.

“This is a breach. And the fact that now attempts are being made to attempt to rectify this breach, I think gives credence to that.

“The laws are there to protect the Bahamian people. And people may hate unions and may look at us as being devils, but we serve a purpose: to ensure that workers’ rights are protected. You could hate us…You think that we’re greedy…But think critically and just put yourselves in our position and ask yourself if you would put up with the same thing.”

“We are working feverishly to bring this issue to a close,” she said, when asked about the meeting. “He is very willing to resolve this, we both are, and our discussion was favourable that we will meet that end very soon.”

However, the BDU’s issues with PHA still persist.

“The straw that broke the camel’s back was not just PHA’s refusal to release the funds that was there, there were other issues as well. And we met with our union members today (Thursday) and they have indicated that the other portion of our negotiations that we originally put before PHA as well as the other issues PHA and the minister have promised that they will deal with. And we will have scheduled a meeting for Monday with them to have all of these issues signed off (on). If that happens sooner, all the better.”

“We can’t prove that we worked the holidays now because we turned in all of those forms to PHA. And some physicians don’t have a record of that. That is the problem. We have a system in place for recording the times that you work, you turn the forms in, they collected them. And in the past, we received payment for it. That has stopped. PHA made the position that it does not want to use those forms anymore. But quite frankly I don’t think that those issues are ours.”

She also reiterated the union has rejected PHA’s offer to pay doctors over five instalments and based on availability.

“We have other issues on the table that we need addressed. But we need to make sure moving forward that this does not continue. That is something we haven’t had a guarantee on as yet and I think that’s what’s really keeping us out – that up to date, even though they have promised the money, we still are not receiving holiday pay.”

She added other issues include the fact that the BDU’s request to be the bargaining agent for public dentists needs to be addressed. She also called for greater attention to be given to the needs of doctors in Grand Bahama who don’t have a proper on-call suite.

When asked if doctors will go back to work if half their issues are resolved, Dr Bassett replied: “No, we need our issues resolved.”

However, she noted her staff is constantly working to ensure physicians are available to respond to emergencies, to make sure there is no “shortfall” and that lives are “not in danger”.

“So we’re not putting the public at risk. We’re fighting feverishly to bring this to an end so people can rest well at night and not have this overshadowing them.”

Black people need to move on from this 'Slave' issue. Let the dead rest man! For the BDU president to use this reference (2nd paragraph) is unacceptable.

Wow! Most of them do look like they would be much more concerned about planning their next meal than taking care of their patients. They're certainly not hungry 'junior doctors'!

This is absolutely disgraceful and unprofessional behavior.

This is a very sad example of what healthcare has come to in our country. Look at the photograph. A disproportionate number of these Doctors are obese and look as if they need treatment. What example are they setting for the patients they serve. Go on Doctors Heal Yourselves first.

Watching too much married to medicine.

Gov’t should own such tenant space for different housing needs by now.

As long as the Filipino staff still working erryting ok....

Not even the slightest worry as long as the people who do the brunt of the work still on the job....