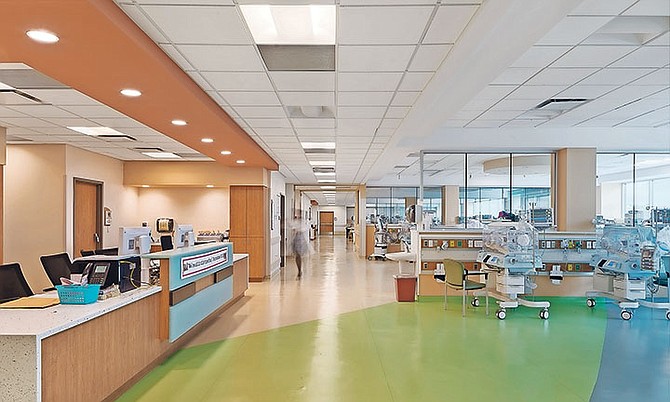 THE treatment of patients in the public wards at the Princess Margaret Hospital was compared with "legalised apartheid" yesterday.

Tribune publisher Robert Carron, former Deputy Chairman of the Public Hospitals Authority board, explained there was a stark contrast between the treatment of public and private patients.

Mr Carron said he was forewarned by Health Minister Dr Duane Sands before taking up the board post but did not understand until he personally witnessed the distinct difference in care.

"If you go by the PMH, it's absolutely legalised apartheid that is practiced up there," Mr Carron said on Guardian show The Revolution, "that's what Dr Sands said and I thought it was a bit harsh but going up there I understand completely.

Mr Carron continued: "When you go to a hospital anywhere else in the world, if you were injured playing a game they don't say to you 'Excuse me, do you have the means or you don't?'

"So what I say that to mean is you are a 100 percent higher more likely to die in the public wards according to that same report than you are in the private wards. But it's the same for everybody."

Mr Carron was referring to a report prepared for a PHA board committee that was formed to transform the country's delivery of healthcare.

Among critical needs assessed were: fast-tracking the refurbishment of the PMH A&E Department; reallocating funds - which had been diverted by the PLP - back into completing critical repairs to hurricane damaged wards and PMH roof; restoring vendor relationships and paying off years of accounts receivables to ensure the supply of medicines and supplies; ordering new radiology equipment; getting ambulances repaired and back on the road; replacing washing machines and ordering sanitisation machines for the laundry; and instilling a culture of accountability and teamwork focused on patient care.

"It was a whole team of us that were doing it and his mandate was to eradicate the toxic combination of systemic corruption, lackadaisical leadership, nepotism, entitlement and all the other things that bring (the hospital) to what you see is unconscionable neglect, that lack of accountability," said Mr Carron.

Comrade Robert is to be saluted for stepping before populaces at-large - be confirming that the treatment of our very own Colony of Out Islanders - left no other financial option but be seeking medical care as patients at the Princess Margaret Hospital's public wards - must 'today' be compared to that former South Africa's hated white racists regime of Frederik Willem de Klerk, yes, no .... .good on Comrade Robert for swearing he will do all within his power to apply he self towards brungin a positive change discriminatory health care treatment for the many who are financially challenged ....

What Robert Carron hasn't disclosed, but full well knows, is that there is group of politically connected senior doctors who are running a highly profitable medical practice at PMH using state of the art facilities and equipment paid for by the taxpayers. These politically connected senior doctors are only interested in serving the healthcare needs of those who have costly private insurance policies or the means to pay cash. Meanwhile Joe Blow poor Bahamian is treated in entirely different area of PMH that is jokingly referred to by healthcare professionals as the "pray you don't die for lack of money ward'.

You are the conspiracy theory KING jed….

You got a conspiracy for erryting…

All them damn hours in the waiting room. Sign them up to NHI during.

"It was a whole team of us that were doing it and his mandate was to eradicate the toxic combination of systemic corruption, lackadaisical leadership, nepotism, entitlement and all the other things that bring (the hospital) to what you see is unconscionable neglect, that lack of accountability," said Mr Carron. Could you say that about any other areas of importance in this country? Just asking.

Very scary and sad. All of the people visiting the Bahamas as tourists have no idea what life is like for the Bahamians. Paradise is deceiving when you know the truth. I’ve always thought that because my Bahamian friends had to work so hard in hospitality. Then you go in the grocery store and see the prices of food. The cost of gasoline. Medical care should be available to all with or without insurance.

He means "illegal apartheid". Apartheid was legal when it existed.

However, this situation is the creation of the doctors.

Earlier this year, I went to a medical specialist for an in_office procedure.

I told her I had no insurance. She said: you are working, you ought to have insurance. Except the insurance costs about 60% of my earnings. What nerve.

Anyway, she did not forgive, the visit cost 560 after her discount of 60 dollars.

I paid in full, but will never return to this doctor. Sad, before VAT, I used her services and she was compassionate and had a sliding scale.

Anyway, there are doctors who give uninsured patients a little break , as the insurance companies hardly pay the full amount.

I just wish some doctors would place a sign saying they only see insured patients.

Most health insurers have contractual arrangements with healthcare providers that limit claim payments made for insured patients to at most 60% of the customary rate for the services provided based on an agreed reference source for the customary rates. The percentage is usually based on the volume of business that the health insurer sends/refers to the healthcare provider, i.e. the more business the insurer sends/refers to a medical doctor, hospital and/or clinic, the greater the discounted claims pay-out made by the insurer under the contractual arrangement with that medical doctor, hospital and/or clinic. While at least a 40% discount is the norm, health insurers have been known to negotiate much higher discounts for certain types of healthcare services. Accordingly most healthcare providers seldom expect to receive 100% of the amount that they bill and are usually quite content to negotiate with and receive from their patient a significantly discounted amount for their services provided.

Its not complicated. The government pays for and maintains the public ward and the private sector (owners and providers of private medical services, etc) the private wards. Ever notice the difference in maintenance between public and private business places?

The truth is the FNM Government has had over two years to correct the problems. 60 % increase in VAT . So what is the game here to make Sands look good and blame the PLP.??

We do remember The Hanna contract. and those who sat around the fake signing for OBAN&lt; No boy Scotts and no pledge of honor.