Workers Out In Solidarity In Grand Bahama 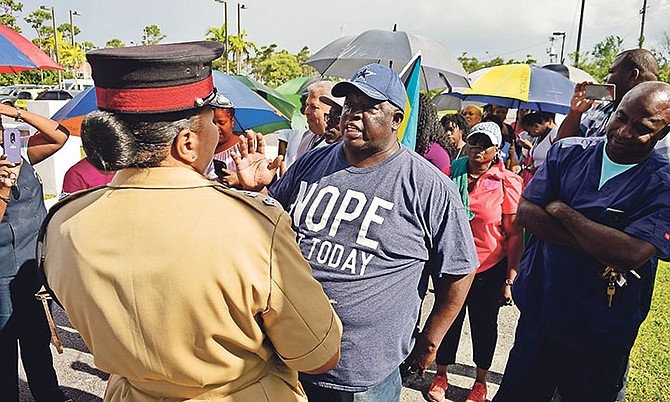 The solidarity march in Freeport yesterday.

SOME 80 workers from the various trade unions on Grand Bahama staged a “solidarity march” yesterday in Freeport in support of junior doctors and over unresolved outstanding issues with the government.

The group first gathered at the Harold DeGregory Government Complex, where the Office of the Prime Minister is located in Freeport, only to be met by officers of the Royal Bahamas Police Force who prohibited them from marching on the grounds.

Ms Hamilton explained that they were not demonstrating or staging any protest, but merely showing their support for “our brothers and sisters” in Nassau.

“We were met on the property by officers of the police force, they stopped us from marching, she said. “We had no placards, it was not a demonstration; it was to show that we are unified and standing with brothers and sisters in Nassau.”

“Such a situation should never happen in The Bahamas,” said Mr Russell, who felt that the action of the police was a violation of the rights of workers’ freedom of movement.

“We were obstructed by the RBPF who refused to let us march peacefully. They diverted us on the grass and continued to follow and harass us, and not allow us to move about freely in peaceful manner,” he said.

“That is something our union leaders and lawyers ought to look at and visit the commissioner of police to resolve that. You don’t need a licence or permit to move about in this country, and I think it was a poor display; it was an attack on workers’ constitutional rights. Those things should not happen, and we call on the minister of national security to take a look at that, and... ensure that kind of treatment never happens to workers again.”

Ms Bullard said the march showed that unions are unified on Grand Bahama.

“We estimated some 80 persons that marched today. We stand in solidarity as our brothers and sisters are doing in Nassau to show that the unions are no longer divided, but unified in their cause,” she said.

She indicated that the industrial agreements of all unions with the government have expired since 2017.

Mrs Hamilton said that they should have already had a new agreement last year, however the negotiations with government are at an impasse.

After being barred from the government complex, the group went over to the Rand Memorial Hospital to support the junior doctors who are on strike in Freeport and Nassau. Ms Hamilton reported that the doctors were called into active negotiations with hospital officials at the time.

“We are here to show our support for them as they fight for what they are entitled to,” she said. “We will continue to agitate until we get results.”

Mr Russell, vice president of Commonwealth of the Bahamas Trade Union Congress, believes there is a renewed sense of solidarity among workers and unions in the Bahamas.

“It is something that we can only begin to compare with the 1958 general strike. I want to send a stern warning that if the government does not begin to truly treat the union and workers with respect, the unions and workers are fired up, and will do what they have to do, and The Bahamas will resemble 1958.”