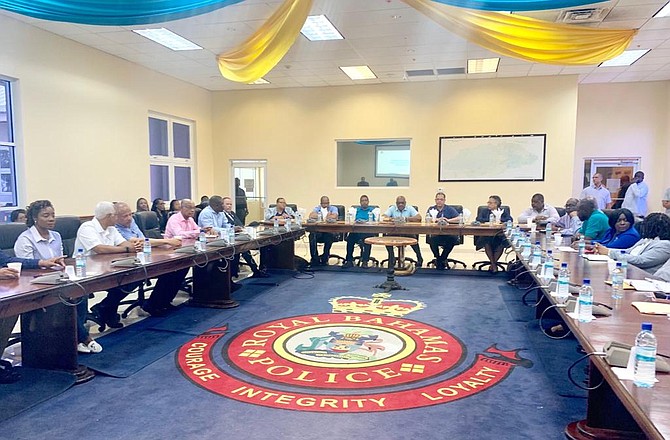 The presentation was held at the Paul Farquharson Centre at police headquarters on Saturday.

PRIME Minister Dr Hubert Minnis has stressed the government takes the concerns of unions seriously after high-ranking officials held “frank” discussions on Saturday with the labour movement on the state of the country’s finances and the need to reduce spending.

A press release issued by the Office of the Prime Minister on Saturday night said the important meeting paved the way for discussions to move forward with a factual understanding of the country’s economic outlook and the government’s fiscal constraints, including the need to exercise spending restraint and reach sustainable economic growth targets.

“We take the unions’ concerns seriously, which is why we convened the first of its kind high level meeting to discuss the country’s economic and fiscal affairs with all of the unions,” Dr Minnis noted. “Moving forward, these kinds of discussions will be integrated into the budget planning process.

“We want to learn from the past and make this kind of citizen dialogue happen in a proactive way,” Dr Minnis said.

“Although union members were hoping to resolve individual issues, the purpose of Saturday’s meeting was to facilitate an open and frank discussion about the state of the economy, and to provide context for the government’s position. We recognise that finalising all outstanding industrial agreements with the relevant unions is a pressing concern and those negotiations must be concluded.”

At the meeting, a presentation by the Ministry of Finance outlined the country’s economic growth prospects, current employment conditions, the fiscal situation, government debt, the concrete steps being taken to reduce the deficit and debt levels, and strategies to boost growth, OPM said.

The release said the government stressed to the unions the importance of achieving fiscal sustainability to enhance the social and economic benefits that can be maintained over the medium and long-term.

It was also stressed that it is imperative that the Bahamas return to a more sustainable fiscal path. Expenditure restraint is crucial to this objective and if not achieved, it will have adverse implications for the entire economy, the press release said.

Dr Minnis noted while the economy is improving, it is still in recovery, adding that the country is still vulnerable to natural disasters and external economic shocks.

He also said: “At all times we want to make decisions that are in the best interest of all Bahamians.”

For his part, Paul Maynard, who served as National Congress of Trade Unions (NCTU) acting president during the meeting, believes it’s clear the government will move to make a deal with public sector unions following Saturday’s meeting.

Mr Maynard continued: “I believe they will make some provisions. They going to have to; and from that meeting they understand they have to.

“The unions are going through the negotiating process. The point is they knew, they should have had the money but they ignored it. I believe they will make the deal.”

Speaking on behalf of the government, Labour Minister Dion Foulkes said both he and Dr Minnis felt the meeting was productive and informative.

He declined to provide any details on negotiations with the Bahamas Public Service Union and Bahamas Doctors Union - both of whom have been publicly agitating for a resolution this past week.

The BDU strike is still ongoing with public hospital services reduced to emergency care only.

Mr Foulkes said: “What we wanted to do as a government is give our realistic impressions of the economy and our limitations to the public sector unions, and we accomplished that. The discussions were very frank, (unions) were very frank in their positions.”

He continued: “All of the major unions gave representation with respect to their economic demands the financial secretary and DPM responded to those questions.”

Kimsley Ferguson, the BPSU president, said his membership will continue to stand down until this evening, when it will meet to chart a path forward. BPSU members protested outside the Churchill Building last Thursday.

Mr Ferguson agreed the meeting was informative, adding it was discovered the government had not made any contingency to address industrial agreements. He noted his union has received a counter offer but did not want to give any further details until it was concrete.

Mr Ferguson said on Saturday: “Concerns were aired, and one of the points that we discovered was that nothing was budgeted to address industrial agreements. The response to that was that they can’t budget for agreements that were not finalised. But our response is that the government is aware of what they want to do, or will do as it relates to increases. It is expected once they knew agreements were expiring they should have done something.

“I can state to my members that a counter was made,” Mr Ferguson said. “I can’t express figures but I could say to them that I’m at the view we can meet the government at that point, if the particular figures that (a senior official) gave can be confirmed. The prime minister advised he would give me a call before the weekend is out, so at the latest is Monday. We need something concrete to present (to membership).”