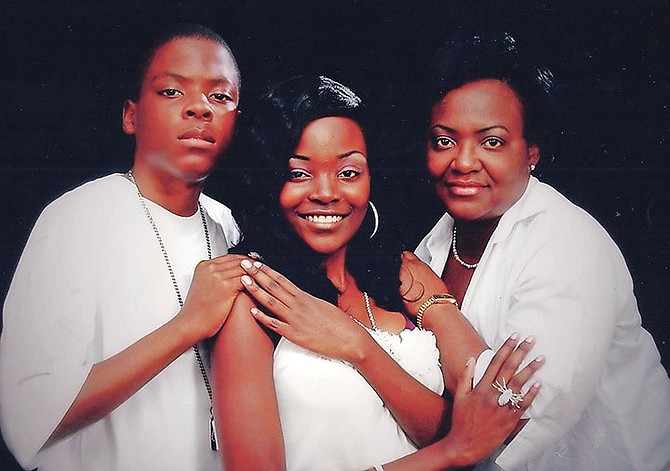 In her newly released, deeply emotional memoir, Zetta Sylvia Baillou-Poitier shares the challenges of raising children with sickle cell disease and the pain of losing her daughter.

“I was inspired to write the book after the death of my daughter,” said the mother of two. “The book is to keep Vashti’s memory alive and it’s also dedicated to my son, Vance.”

Between the pages of “Facing Two Sickles: Families Dealing with Sickle Cell Disease”, the Cooper’s Town resident offers up parts of her life and that of her children who were born with sickle cell disease – a genetic condition in which a person inherits abnormal haemoglobin genes from both parents.

Haemoglobin, the protein inside of red blood cells, carries oxygen. Abnormal haemoglobin makes the red blood cells change shape from smooth and round to hard, sticky and sickle (banana) shaped. This abnormal form can cause trouble as red blood cells move through the body, causing episodes of intense pain (called crisis) and, in some cases, organ damage.

It is a disease that affects each person differently. Some people with sickle cell disease can lead fairly normal lives. For the Poitier family, however, that wasn’t the case.

Mrs Baillou-Poitier’s oldest child, Vashti, was a sophomore at the Southern Polytechnic State University in Marietta, Georgia when she contracted pneumonia and was hospitalised.

Over the course of a week in May 2012, Vashti was in and out of the hospital for pain management treatment. With no signs of improvement, she was admitted to the intensive care unit (ICU). There, Vashti died after her lungs collapsed.

It was during her pregnancy that Mrs Baillou-Poitier discovered both she and husband, Floyd, possessed the sickle cell trait and there was a possibility their child could have the disease.

When both parents are carriers, each pregnancy carries with it a 25 percent (one in four) chance of having a baby with sickle cell disease.

Although carried to full-term, Vashti was born weighing only three pounds, 15 ounces. For Mrs Baillou-Poitier, her low weight at birth was a sickle cell warning sign. Confirmation came six months later when her daughter’s blood was tested.

The Poitiers’ second child, Vance, was born premature at seven months, weighing one pound 13 ounces. With lungs not fully developed at birth, from the onset he was the sicklier of the two children. As Vance got older, each subsequent crisis caused respiratory distress.

At the age of four, doctors placed him in a comatose state for two weeks. The objective was to give his lungs a break; they were nearing collapse.

Very early on, the Poitiers were forced to make the difficult decision of splitting up the family. When Vance was just two years old and Vashti was six, he moved to Freeport with his paternal grandmother. The family reunited during school breaks and holidays.

“A lot of persons did not understand why we separated the children, but we knew as a family the reason why. It was better to have him in Freeport with my husband’s family and have Vashti with me and my husband in Abaco,” said Mrs Baillou-Poitier, who at the time had a demanding job with a local bank while her husband worked as a linesman with an electricity company.

“We knew the move would be better for his health, allowing him to be in close proximity to a hospital if he needed it rather than having to fly him to another island if he needed to be hospitalised,” she said.

Despite being in and out of clinics and hospitals, the Poitier children led full lives.

In 2010, Vashti graduated from the Valencia Community College in Orlando, Florida with an Associate degree in drafting and land surveying. She enrolled in Southern Polytechnic in January 2011. She was expected to graduate in 2014, but it was not to be.

Vashti was laid to rest on June 2, 2012, five days before her mother’s 49th birthday and six days prior to then-17-year-old Vance’s high school graduation.

“While we were preparing to bury her we were also preparing to celebrate his graduation, so it was a whirlwind. It was rough,” Mrs Baillou-Poitier recalled.

Although she has wrapped up her book, a project which took three years to complete, her family’s journey with sickle cell disease continues.

Vance, who is studying computer science at Valencia, his sister’s alma mater, went into a crisis two days prior to his mother’s August 17 book launch at Faith Walk Church of God in Coopers Town, Abaco.

Mrs Baillou-Poitier travelled to Orlando to take care of the couple’s son who has been hospitalised three times since enrolling at the tertiary institution.

“I want persons to know whether it’s sickle cell, cancer or whatever disease your child may have, you can find strength through God. You must depend on God for your strength. Family support is also important,” she said.

“Even if your child wasn’t sick but you lost a child through an accident, this book is to encourage and counsel on how to survive in the midst of that storm.”

Making a special trip to Abaco for the official launch and book signing was Kayla Smith-Mortimer, president of the Bahamas Sickle Cell Association, and Kristin Beneby, the organisation’s assistant treasurer.

The association felt it vital to lend its support and endorse the new release.

“We are proud of the book Mrs Poitier has written. I know that it will touch the heart of the readers, like it did with me,” said Mrs Smith-Mortimer, whose association is working to support Bahamians afflicted with sickle cell across the nation.

“I believe it will give others the courage to speak up about the disease.”

“Facing Two Sickles: Families Dealing with Sickle Cell Disease” is available at barnesandnoble.com and Amazon.com in paperback, for download on Kindle, and as an audio book.