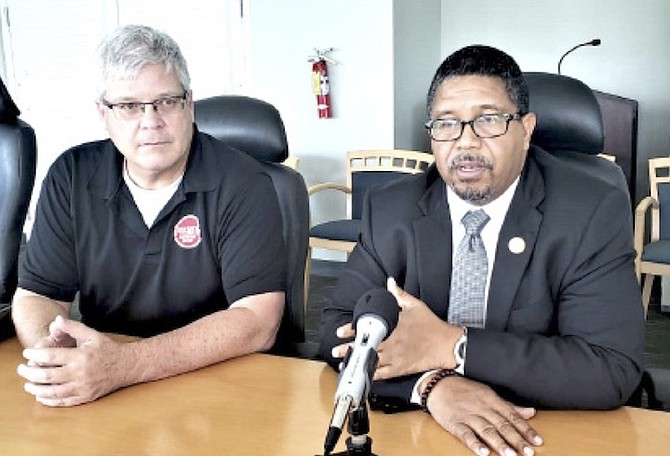 FINANCE Minister K Peter Turnquest yesterday led a delegation to Abaco yesterday to meet with the Chamber of Commerce and the Customs Department to address issues regarding the Click2Clear system.

Tribune Business reported earlier this month of how the Abaco business community had been "extremely upset" over "delays and added expenses" created by the transition to the new digital process. ​

The meeting was convened to address pressing issues identified by the Abaco business community regarding the implementation of Click2Clear (formerly the Bahamas Electronic Single Window). Government representatives committed to system improvements that would remedy issues identified by the business community. Acknowledging Abaco's complex commercial ecosystem, both parties recognised the value of on boarding Abaco successfully. ​

"We are very pleased and very thankful that the government responded so quickly to our concerns. It just shows that going forward we have a serious partner willing to address the concerns raised by the Abaco business community that effect the entire island," said Kenneth Hutton, President of the Abaco Chamber of Commerce. The meeting took place after several weeks of in-depth dialogue between business stakeholders and the project implementation team. ​

"We are very happy that they brought a high-level delegation: Decision makers who could address critical issues on the spot. Overall, the meeting was incredible productive. Everyone went away feeling satisfied that the government came prepared to ensure their concerns were met. There wasn't a single unanswered question. They stayed as long as they needed to and addressed all of the concerns brought up. Moving forward we look to the continued cooperation," said Mr Hutton, who also praised the local customs officers and those who manage the helpline for the responsiveness. ​

Deputy Prime Minister and Minister of Finance K. Peter Turnquest, who led the delegation, provided assurance that the Government's goal was to operate a product that can effectively facilitate trade and improve the efficiency of doing business throughout The Bahamas. ​

"We are thankful that the business community appreciates not only the scope of this project but also the dynamic nature of implementing such a major change. With any change there are going to be some hiccups and a learning curve to adoption, so we appreciate the constructive dialogue that we had here today. From this meeting we wanted to identify a clear path forward to address the specific challenges of the Abaco business community. We feel confident that this was achieved and thank the Chamber for inviting us here," said Minister Turnquest. ​

The most pressing issues included system improvements to reduce the repetition of data inputs, improved summary reporting for individual importers, the fluidity of processes around bond reconciliation and releases, and the automation of data uploads. ​

"We have additional Customs officers on island and they are going to be here until we feel confident and certain that the importing public - the business community of Abaco - is confident, efficient and able to effectively utilize the system. We want to assure the Abaco business community that Customs is here to work with them. You are our partner and an important stakeholder. We are here to serve you ad we won't leave you until we are sure you have done the job well," said Comptroller Geannine Moss. ​

Damn. The dude is from Freeport and has yet to do anything about our now 3 year old crisis. But Abaco got a lil issue with clearing goods and he gone running...

And I say very good for all of the proud FNM's and for Grand Bahama FNM Country.

The night the PLP lost the election I was sad. The Next morning I rejoiced. I was happy they had lost. The "peoples time voters had sealed their fate.