Stateside: The President’S Apologists Parading Like A Mobster And His Moll 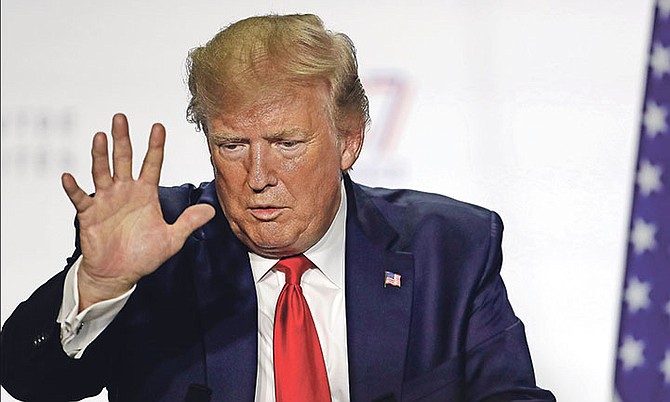 When they walked into the large meeting room lined with pew-like benches, the couple looked like nothing so much as an ageing mobster and his moll. Of medium height and with thinning black hair and a face relaxed into a constant scowl, he strutted forward with a bulldog’s purpose and tenacity. The woman trailing slightly behind looked vaguely troubled under her shock of red hair.

He is Joe diGenova. Like his wife, Victoria Toensing, he is now in his 70s, but determined to remain politically relevant. In 1983, he took over under then-President Ronald Reagan as the United States Attorney for the District of Columbia. This was a powerful position in the American government, presiding over all federal law enforcement in the nation’s capital.

A relatively quiet Republican partisan in those days, diGenova has emerged in recent years as a loudmouthed, brash apologist for President Donald Trump and purveyor of various conspiracy theories and rhetoric in support of the wobbling US president. He and his wife were even considered for positions as White House counsellors last year.

Earlier in 2019, diGenova urged Americans to “buy a gun and vote, because a civil war is coming”.

Now, the couple is on the road, confidently spewing venom toward Democrats and the “mainstream American journalists who have made their profession a joke”.

diGenova lavishly praised US Attorney General Bill Barr for conducting an investigation into alleged Obama administration malfeasance and spying on then-candidate Trump. Toensing said the Obama era abuses were “far worse than Watergate. And the so-called mainstream media are completely ignoring it. Anyone who is reasonable will agree with us”.

The audience from a quiet country community was nodding appreciatively. The room was filled to overflowing with mostly grey-haired, elderly white people, women as well as men. They clearly believed what they were hearing.

But beneath all the bombast lay an interesting perspective. diGenova ignited an intriguing discussion with his remark that “of course Russia interfered with our 2016 election. It’s what they do. They have been doing it to us and others for at least 50 years. Russian disinformation activities go back to the 1920s. This election interference is not anything new”.

“In fact,” he continued, “interfering in elections is what most intelligence agencies do, certainly including our own (American) agencies. We repeatedly bribed officials in countries like France, Italy, Spain and Germany in attempts to influence their elections.”

diGenova asserted that despite their evident efforts to distort the 2016 election outcome, “the Russians never got close to voting machines. They only could influence some data. This whole Russian interference story is nothing more than an elaborate scheme by the Democrats, Hillary Clinton’s campaign and the national mainstream press to delegitimize Donald Trump’s election as president.”

He nonetheless awarded the Russians “an A+ for disinformation. Look at the circus of distraction they have helped to cause. No one is seeing all the good things Donald Trump is doing”.

Like Trump walking out of a meeting on climate change of the world’s most prominent leaders while the earth’s lungs are burning in Brazil? Like that? Millions of people are seeing what Trump is doing about that.

In the politics of this viral American age lurking in the background remains the Tea Party.

Official records claim this fringe Republican affiliate was formed in early 2009, but its origins are really found 15 years earlier. That’s when obscure Georgia GOP politician Newt Gingrich led a populist revolt to become Speaker of the House of Representatives. His main issue was resistance to a charismatic Democratic President, Bill Clinton.

When the Tea Party became a national political force, it was similarly focused on resistance to another charismatic Democratic President, Barack Obama.

While superficially concentrating on small government and reducing the national debt, the Tea Party, like Gingrich, was actually about challenging the political status quo. It claimed ten percent of American voters at one point.

Not now. In the process of overwhelming the Republican Party, Trump has virtually pushed the Tea Party out of the national political discussion. Still, it persists, in remote corners of the US. A recent visit to a local meeting revealed changing priorities in the past four years among the group’s membership.

In 2015, the exclusively white Americans who attended this local Tea Party meeting were worried. In a place far from the wealth and power of New York and Washington, they still felt the sting and burden of the Great Recession of 2008-09.

Employment figures still sagged from just a decade earlier. Most of those attending expressed profound uncertainty about how they would be able to feed and educate their families. Desperation and despair prevailed.

Fast forward four years. The local Tea Party leader is the same. But he no longer begins the meeting by holding up a clownish effigy of Barack Obama. Now those in attendance are treated to a succession of short videos accusing Facebook and Twitter of active collusion with the Democratic Party. This is punctuated by a plea for the leader for smaller government, lower taxes and a balanced federal budget. The party tenets remain libertarian.

The Republican county sheriff appears and speaks for ten minutes. He cannot completely disguise his discomfort, since he is attending principally to avoid any possibility of a Tea Party challenge to his re-election bid next year.

It must be noted that those in attendance have clearly benefited from Trump’s strong economy. Gone from their questions are the desperation and despair of just four years ago. Instead, they are harshly critical of the national media. They watch a video asserting that Trump didn’t mean to praise neo-Nazi thugs when he asserted after 2017’s Charlottesville tragedy that “there were good people on both sides”.

A video entitled “Build the Wall” was shown in support of Trump’s proposed southern border barrier.

The issues were political, not economic. That felt like progress.

As paid psychiatrists and other pundits step up their commentary about septuagenarian Trump’s possible slide into mental decrepitude, we share two comments about age by a couple of prominent African American figures, both overheard the other day.

“I’m so old, I can remember when the Dead Sea was just sick.”

He is officially the worst president ever. The man has zero redeeming qualities, he is scum. And I apologize to all the scum out there but he is one of you....