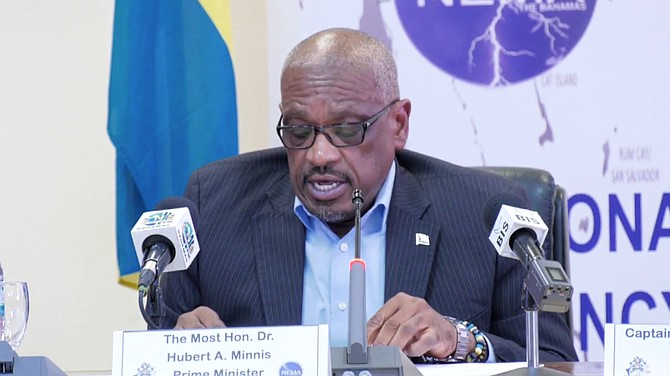 THE Minnis administration’s disaster, mitigation, response and recovery plan features a $100m line of credit from the Inter-American Development Bank.

Dorian is expected to make landfall on those islands on Sunday and into Monday as a Category Four Hurricane.

He made the announcement while urging those living in high-risk areas to evacuate their homes.

“The evacuations are part of the government’s disaster, mitigation, response and recovery plan,” Dr Minnis said during a national press conference on Friday.

“We are working to ensure that the evacuations are completed as efficiently and as orderly as possible given the circumstances at hand, and the possibility of the hurricane taking a different path than currently forecast.

“All government offices throughout the country have been closed at noon today (Friday).

“The opening of government-operated schools in affected areas will be delayed and will open following assessments.

“We have confirmed that there are sufficient medical supplies available at the Rand Memorial Hospital on Grand Bahama.

“The minister of finance has been instructed to mobilise the $100m line of credit from the Inter-American Development Bank, which we signed in April.”

He continued: “This is a key component of the government’s readiness plan so that we can have access to resources as quickly as possible to speed up response and recovery efforts.

“Again, I am appealing to Bahamians, residents and visitors to take all necessary precautions to safeguard themselves and their property.

“I also appeal to Bahamians and residents to only rely on reliable sources of information and to avoid questionable, unreliable and fake information.”

A Dorian ravaged east coast of Florida will get access to resources long before Abaco and Grand Bahama. A $100 million credit line means very little if there's nothing to buy for many months after Dorian flattens and washes away most of the buildings on these two islands. Money from the credit line will simply be squandered by our corrupt politicians and their favoured cronies leaving the people of Abaco and Grand Bahama to suffer for the effects of Dorian for years to come. Minnis was just too busy throwing money at the Grand Lucayan Hotel, and conducting umpteen costly and useless investigations of corruption by the last Christie-led PLP government, to worry about something like national hurricane preparedness. When it comes to governing, Minnis and Turnquest only know how to do two things: Increase our national debt and tax Bahamians to death.

Marsh Harbour is about to be ravaged in a most vicious way. But Minnis cannot tell us one tangible step taken by his feckless and incompetent government to prevent the massive looting that's undoubtedly going to occur by thousands of desperate illegal Haitian aliens in the Mud and Pigeon Pea. Rumours have it Hubert Ingraham and his family have apparently evacuated Northern Abaco for a safer place on New Providence Island. A significant number of Bahamians are about to lose their lives in Abaco because the Minnis-led FNM government failed to put in place evacuation and other vital plans necessary to avoid or minimise the loss of lives. And the same can be said for Grand Bahama.

Clearly the complete devastation caused by major monster hurricanes to our southern most islands a couple of years ago did not resonate with or teach the dimwitted Minnis anything at all. Meanwhile Turnquest is telling Minnis that the devastation about to be inflicted on Abaco and Grand Bahama will create the ideal excuse and opportunity for the government to significantly increase both the national debt and the level of taxes imposed on Bahamians and their businesses throughout the country. Yes indeed, the Minnis-led FNM government now seems to be a truly sad curse self-inflicted on the Bahamas by Bahamian voters in May 2017.

Once again much too little, much too late. The lack of preparedness for a monster hurricane like Dorian is not too dissimilar from the lack of preparedness behind the BPL debacle. Both of these disasters will have caused great loss of life in our country. Yes indeed, the Minnis-led FNM government is going to have more blood on its hands than any other government in the history of the Bahamas.

Please put your Black Crab back in its Basket, as this is no time for divisive political commentary, as Minnis gave one of the most uniting and inspiring addresses of any Prime Minister yesterday from Marsh Harbour when he said in facing this Storm we are not PLPs, FNM,s, Black, White, Resident, Visitor, Hatian, Bahamian, but Humans within The Bahamas for which he bears responsibility. As for Abaco, it is inhabited by the strongest, most resilient and independently minded people we have, who will not only survive, but rebound and indeed post AIM are capable of supporting not just themselves, but carrying the rest of this Country on their back, if ever need be ...

Yes,in deed. All of the, Well_mudda_take_sic 's statements here are very ascertained. I support that message because it's true. I agree with all of the above said by him. We really need people with a clear and realistic political criteria like his who speak with courage without any impairment or concern regarding any retaliation by and from the government. I want to encourage Well_mudda_take_sic to continue expressing his mind in criticizing "The Wrongdoing By Elected Officials" , their mission is to continue endebting the nation without showing anything positive and tangible effect toward the people they suppose to serve.,the government conradery with locals/international financial institutions like Inter-American Development Bank (IDB) which very often is so complaisants with crook local politicians by lending Millions & Millions of dollars. The list of activities regarding loans is so large : the newly line of credit for natural disasters improperly cover by the government $100.00 Millions,(they don't even cut the branches of trees around houses). There was another $40.00 Millions to build "A Green Barrier Of Mangroves" ( they can't show nothing,not even a single tree of mangrove planted). And all consecutive many loans to BPL and so on (Just to give Blackouts to the community). What a disaster !.

Why get a $100 million credit line from the IADB to be paid back with interest? What happened to buying catastrophic insurance as they have before?