FACE TO FACE: Kayla and her Zontians leading the charge to end violence against women 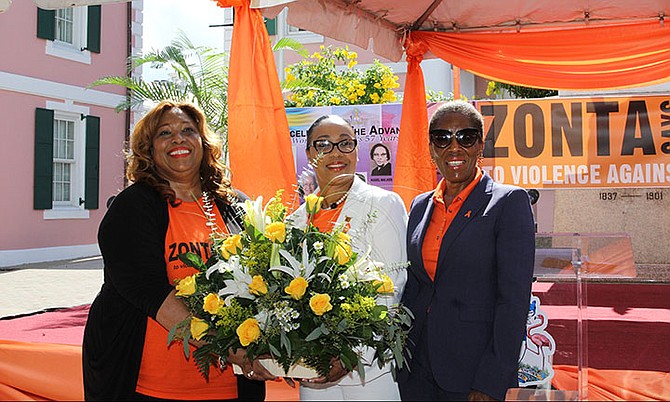 For the past seven years, Zonta Bahamas has been at the forefront of this activism. Zontians have been out there in the community, on public and corporate platforms, bringing awareness and encouraging Bahamians to change the face of violence in this country. This year, they were at it again, launching the 16 days with a big event in Rawson Square held in conjunction with the Department of Gender and Family Affairs, the Ministry of Health and NGOs. The launch was held on November 25, the International Day to End Violence Against Women and Girls. The 16 days officially ends on December 10, which is the United Nations’ appointed International Human Rights Day.

I took the time to speak with a Zontian about why club members put so much energy and effort into this activism. I found out that each of them, being women, know how pervasive violence is in our community, in our homes and schools, and intend to continue to fight against it. They are elated that, at this year’s launch, Minister of Social Services and Urban Development Frankie Campbell announced the government recently made a commitment to work towards ending gender-based violence in the country. Minister Campbell said the commitment was made by himself on behalf of the Government of The Bahamas while attending the International Conference on Population Development (ICPD) 25th Anniversary Meeting.

For Kayla Darville, president of the Zonta Club of New Providence, this was welcome news. Especially because the club’s theme for this year is “From Activism to Advocacy”. One of Zonta’s partners for the 16 days this year, the National Congress of Trade Unions’ Women’s Association, is pushing for the Bahamas government to ratify C-190 – the International Labour Organisation’s Convention to end violence and harassment in the workplace. 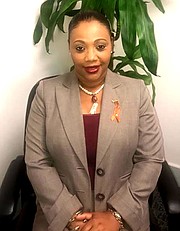 It takes a lot of work to pull off the many events Zonta holds - and it’s all volunteer work. Kayla calls it a passion of hers and despite her busy professional life, she will continue to work hard for causes for the betterment of women and girls.

“Zonta dedicates so much time to the 16 Days of Activism because we are passionate about advancing the status of women and girls by ending gender-based violence,” Kayla explained. “Thirty-five percent of women suffer from some form of violence, and approximately 70 percent suffer at the hands of a partner. The effects of gender-based violence (GBV) are far reaching and because so many of the households in the Bahamas are single female homes, we need to protect the women.”

Her life is an example of what a determined woman can accomplish for herself – setting goals and conquering them one by one. Kayla was born in New Providence and is the second daughter of Ingrid Bennons. She has an older sister, Ernestine Seymour and younger brother, Brehon Bennons. She is a graduate of St Augustine’s College, Class of 1986. Today, she is married to Richard Darville and they are parents to twins Richard Adam and Rhyan Ashleigh.

When she graduated high school, Kayla got a job as a receptionist at First Caribbean Bank. But she knew all along that she wanted to do more and be more, and she made a decision to apply herself in her position and create opportunities to move up the ranks in the bank. She did online courses, she travelled to attend courses when necessary, and she did indeed climb the corporate ladder. She received an Institute of Canadian Bankers certification, as well as an American Bankers Institute certification. She attended the University of Western Ontario’s Richard Ivey School of Business Leadership Programme, and she also attended Nova Southeastern University for a time. She also furthered her education in banking through the Caribbean Information & Credit Rating Services Ltd’s Credit Risk Analysis for Corporate & Commercial loans certification.

It was worth it. When Kayla finally parted company with CIBC she left with the title of Personal Banking Manager. Today, she serves as the Mortgage Centre Manager at Commonwealth Bank Ltd, where she has moored for more than 18 years. Altogether, she has spent 31 years building her career, proving that stick-ability and determination can result in the realisation of your goals.

Being a part of Zonta gives Kayla an opportunity to give back, especially to young women who may be in the position she once was when she started out in her profession. For this reason, she is just as passionate about the 16 days of activism as she is for the Workforce Readiness Programme Zonta also hosts each year.

“It’s a passion because I have an opportunity to assist and change the lives of disadvantaged unemployed women by giving them the skills they need in order to turn their lives around,” she shared. “All they need is a hand to guide them and a willing soul to impart knowledge, and concern.”

An important ingredient in young women’s success is their ability to live a life free from violence; so their advocacy work is all tied together.

During the 16 days’ launch, as well as a special “Sip n’ Speak’ event Zonta held at the weekend, Kayla heard testimonials that moved her and gives her the impetus to continue to advocate against violence.

“These victims suffered rape and physical and verbal abuse from partners and even family members,” she said. “These women were able to get help and that is why they were able to give their testimony. One of the testimonials came from a woman who is married with children and who has written two books. Another was able to continue her education (after getting out of a violent situation) and had completed her CPA. The message here, is reach out to someone (a trusted friend or partner or the Crisis Centre) before it’s too late. Some are not alive today because they didn’t speak out.”

Kayla also warned that all Bahamians need to take the matter seriously, and avoid all forms of violence, including emotional and verbal violence, in the homes. She said that “once children live in violence, they continue to believe violence is acceptable” and social ills will persist.

By creating the right environment for women and girls, they will be given the space to flourish. Kayla enjoys living her life as an example of starting from the bottom and making it to the top. Even in Zonta Club of New Providence, she has proven this. She started out as an invited member, making a commitment to service and advancing the status of women and girls. Over time, she served as Director, Recording Secretary, Assistant Treasurer, Treasurer, Vice President and now as President of the very active NGO.

Zonta international is currently celebrating 100 years of existence. It’s mission and vision is “a world in which women’s rights are recognised as human rights and every woman is able to achieve her full potential”. Visit zonta.org and zontanewprovidencebahamas.org.

It’s not too late to participate in the 16 days of activism. Today, the Trafficking in Persons forum (TIPS) will be held at the Ministry of Social Services Hearing Room from noon to 2pm, hosted by Zonta, the Ministry of National Security and the Embassy of the United States of America in The Bahamas. On Friday the National Women’s Luncheon will be held at the Melia Resort, by invitation. However, free to the public, is a “Fight for Your Life” self-defence training session held by Jachin the Network at Empire Gym, Seagrapes Shopping Plaza. On Saturday, December 14, the public is invited to bring new or gently-used shoes for Zonta’s “Walk in My Shoes” event. This year’s community outreach will take place at the Fox Hill Park from 2 to 6pm. There will be lots of information and activities geared toward enlightening the community on what GBV is and how to end it. Next week, Zonta will be reaching out to women incarcerated at Her Majesty’s Prisons, as Well as the Willamae Pratt Centre for Girls and young teenagers at the Simpson Penn Centre for boys.