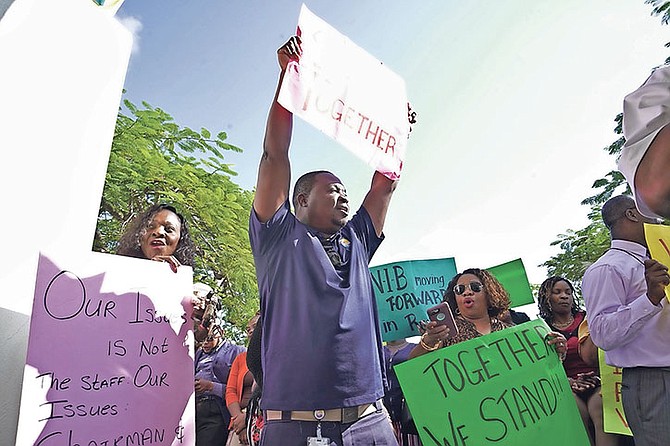 THE National Insurance Board cited mounting pressure on its fund due to job losses and business closures brought on by Hurricane Dorian, as the agency said it is trying to work with its staff union to conclude a new labour contract.

The statement came as angry NIB employees protested for the fourth time yesterday and pledged to continue until they have a new agreement signed.

NIB said in a statement that in the current negotiations, the board has agreed to monetary increases in almost every category of staff benefit, including monthly mileage allowances, acting and responsibility allowances and the introduction of new financial benefits.

According to NIB, an outstanding issue is “automatic promotions” for some employees.

The statement said: “There have also been increases to the performance-based Christmas bonus which is paid irrespective of the financial performance of the board. NIB offers an attractive salary and benefits package to its staff, inclusive of health insurance and a staff pension plan.

“The outstanding issues remain around automatic promotions of certain groups of employees and the compensation schedule (ie lump sums and salary add-ons). The UPO has been asked to present a clear, written counterproposal which reflects the views of their members. The board will also be seeking a clear commitment to productivity and service level improvements.”

NIB said for the 2020 period, management is projecting a sizeable deficit between contributions income and benefit payments, consistent with actuarial projections for the National Insurance Fund. “Further pressure has been placed on the fund in the aftermath of Hurricane Dorian, which has left many Bahamians unemployed, and contributing businesses closed on the second and third largest economies of the Bahamas. Management has sought to prudently manage NIB’s resources by slowing the growth of administrative expenses while preserving the staff complement,” the statement said.

“Management accepts that the path to improved sustainability is difficult and unpopular but is necessary for the overall benefit of the thousands of Bahamians who depend on the fund. Notwithstanding the protests by the union, management will continue to focus on its core mission of providing benefit payments to its beneficiaries, and to improving its service delivery.”

Ghion Roach, Union of Public Officers (UPO) president, said workers walked off the job again yesterday because of a breakdown in talks over one or two clauses in the new industrial agreement. He said: “The progression clause was already agreed on. We already signed it and we are not prepared to change and that’s I understand one of the things that we’ve been haggling over, but, like I said, we had an agreement we negotiated that at the table and that was signed. We have moved on from that.

“Friday we would have had to leave after some of my members weren’t feeling well so we came back to work this morning only to find out that we still don’t have a resolution and so we decided we are going to walk off again. We want our contract to be completed. We have about one to two clauses that we need to be signed off on.”

Mr Roach continued: “We have a bone of contention over one or two of them, but we are not prepared to stand down on them. Those articles were previously agreed on and we are not going to go back and change them.”

The union leader said the deadline for the contract to be complete has passed and the workers will continue to protest until the matter is resolved.

“We are holding a strike certificate when it’s time to exercise that we will. I’ve not heard (from anyone), the minister, Brensil Rolle, would have given me a deadline of the 30th of November and the 30th of November passed on Saturday. Again, it brought us back here to where we are. The deadline was for the contract to be completed,” he said.

“We went back to negotiations on the 5th, we stalled, and we have not been in negotiations since the 8th and so the 30th has passed. The deadline is over and so we will continue to do what we have to do. I can’t speak to the finances of the board, but I know the talk at least that was stated in their press release is that we are seeking to raise administrative by some exorbitant amount.”

Public Service Minister Brensil Rolle told reporters yesterday the deal was that both parties would have come to an agreement no later than November 30. He suggested the latest protests were politically motivated.

Mr Rolle noted: “NIB broke the deal – they started demonstrations before the 30th so the ball is in their court now. I spoke to (Ghion Roach) last Tuesday — I called him, he didn’t call me. We spoke and I didn’t get any impression that he was trying to reach me. I called him to have him speak with our negotiator, so I don’t know what that means. I called him to ensure that meetings were going on. I don’t use politics and engage in political theatre to cause things to happen.

“Protest would not ensure an agreement, that’s not the way we negotiate in the Bahamas. We negotiate in good faith, gave them a commitment, they did (not live up) to their part of the deal now it’s back to me. I don’t know how that’s possible in the Bahamian context. They protested three days before so if we had a deal for a certain date and a certain time and you go out and protest then that means you have another motive and I can’t measure your motives and I suspect those motives can’t be professional must be something other than professional.”

The minister said he does not support automatic promotions, saying they are based on performance.

Mr Rolle said: “I can’t support any skill where if you are in a position for a year or two and your performance is average you should be promoted automatically that is not Bahamian, that is not acceptable. It’s not like that in any other job that I know. If there is one that you can let me know about that’s fine. I suspect that promotion comes with performance, it’s driven by performance.

Can you just imagine the bankrupt NIB Fund having a system of "automatic promotions" with no regard whatsoever for the employee's performance! Totally absurd!!

Does such an "automatic promotion" system for unionized employees exist elsewhere in government departments and agencies, and in government controlled enterprises?

nib funds that were held in trust and supposed to invested to pay the pensions of future retirees have instead been diverted to prop up failing government owned institutions such as Bahamasair and bob. these actions taken by prior ministers of finance and cabinets will have seriously bad repercussions. I have been telling everyone I know for decades now to not rely on nib for a pension. The mismanagement of funds was obvious and even reported in the newspapers.

Automatic promotions? That roach been eating crack . In the real world you must perform in order to advance!

And watch they will get their automatice promotions along with all the other things, as Goverement will always bow before the union as its only the taxpayers money. As hrysippus says you shouldn't be relying on NIB to give you a pension, its going to be long broke before then

I think these unions meet on the weekend and draw from a hat as to who goes next. Every week it's another walkout or protest by one of the unions