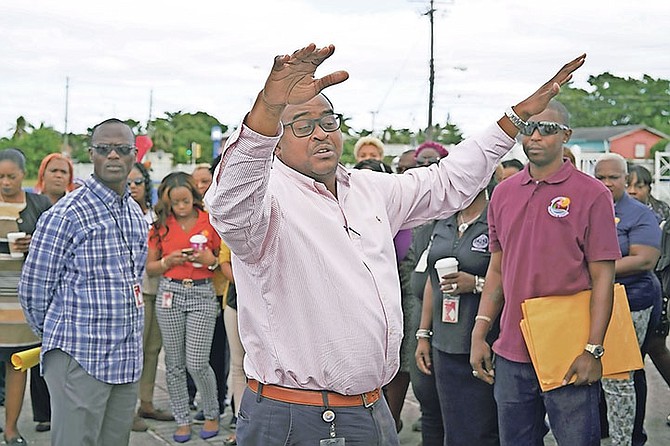 TENSIONS continue to flare between the National Insurance Board and its employees, who held another demonstration yesterday over failed negotiations for workers’ new industrial agreement.

Since last week, NIB workers have been protesting at the agency’s headquarters on Balliou Hill Road, calling for officials to finalise a new labour contract, which was originally supposed to be completed November 30 - the deadline given by Public Service Minister Brensil Rolle.

But, according to the union president, negotiations over the new agreement had stalled. Workers also protested in October before taking a strike vote over their issues.

“We went back to negotiations on the 5th, we stalled, and we have not been in negotiation since the 8th and so the 30th has passed. The deadline is over and so we will continue to do what we have to do,” Mr Roach told reporters on Monday.

“I can’t speak to the finances of the board, but I know the talk at least that was stated in their press release is that we are seeking to raise administrative (costs) by some exorbitant amount.”

His comments to the press came after workers walked off job due to a breakdown in talks over one or two clauses in the new industrial agreement.

But, in a statement released on Monday, NIB officials said that in current negotiations, the board has agreed to monetary increases in almost every category of staff benefit, including month mileage allowances, acting and responsibility allowances etc.

However, for some employees, according to NIB, the outstanding issue is “automatic promotions.”

The statement continued: “The outstanding issues remain around automatic promotions of certain groups of employees and the compensation schedule (ie lump sums and salary add-ons).

“The UPO has been asked to present a clear, written counter proposal which reflects the views of their members. The board will also be seeking a clear commitment to productivity and service level improvements.”

As it relates to automatic promotions, Mr Rolle told reporters on Monday that he does not support the move because upward movement should be based on performance. He also suggested the latest protests are politically motivated.

However, during yesterday’s demonstration, workers pledged that they will continue to exercise their rights until all issues at the agency have been resolved.

Nadia Vanderpool, an NIB employee, said: “We’re very upset with the way they’re dealing with the entire situation and as we understand, they are not agreeing with anything that has been brought to them.. any of the terms and conditions.

“They sent out an email yesterday by senior management in HR, telling the supervisors and managers of the areas that they want a list of the name of persons who are not at their desks after tea break and who actually clocked out and left.

“But, we are prepared to fight for our rights and more Bahamians need to do this. We need to come together and stand together as a people when we want to see changes.”

Garrett Bullard, another NIB employee, added: “We are the backbone of the social structure of the Bahamas… it’s more than an increase. We have mothers. We have fathers. The light bill has gone up and we have not received a new union deal since then. The people just want what is fair to us. We only want what is right and we will continue to fight and ask for what is right.”

During yesterday’s demonstration, Mr Roach told members that he would be meeting with an attorney to seek legal advice for the union’s next move.