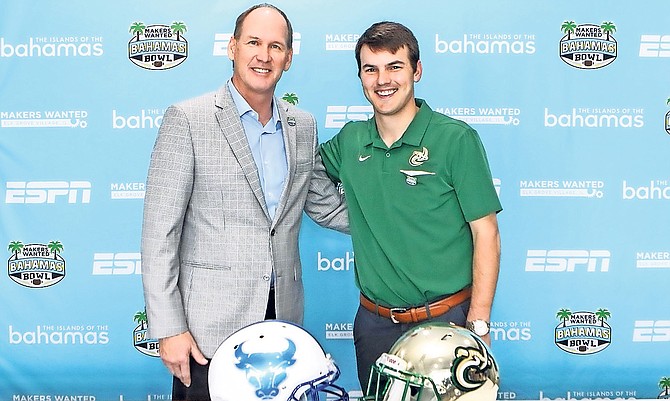 THE 2019 Makers Wanted Bahamas Bowl matchup between the Buffalo Bulls and the Charlotte 49ers will be an historic milestone for both programmes.

Athletic directors and head coaches from both programmes got their first opportunity to experience the Bahamas this week and expressed their excitement at the opportunity to make history.

Bowl season will begin in the Bahamas when the Bulls, (Mid-American Conference) and 49ers (Conference USA) faceoff 2pm Friday, December 20 at the Thomas A Robinson National Stadium.

Charlotte will play in its first bowl game in school history as the 49ers began play in 2013 and moved to the FBS level and C-USA membership in 2015.

"As an AD 20 months on the job, for our institutions to play in a country like this and to come to a place as spectacular as the Atlantis. We're grateful for the hospitality. To be able to have two programmes on the calibre should make for a really exciting game," said Mike Hill, Charlotte's director of athletics.

"We're still very proud of our football team. Just two years ago, this programme won one football game. Just five years in FBS football, to have coach Healy and his players and our staff deliver such a special season. Our campus is electric right now, our city is so excited for this programme and we're so grateful for this opportunity."

Head coach Will Healy, who led the 49ers to a 7-5 record overall, 5-3 in Conference USA play, is in his first season with the 49ers and his fourth season as a college head coach (20-26 overall record at Charlotte and Austin Peay). Healy was the 2017 FCS Eddie Robinson Coach of the Year award winner at Austin Peay as the Governors advanced to the NCAA FCS quarter-finals that season.

Healy will be the first head coach to lead his team in the Makers Wanted Bahamas Bowl in his first season in charge.

"The opportunity for Charlotte football to have this experience in this beautiful place is incredible and once we heard about it, it didn't take long for these players to get fired up for this trip," Healy said.

"Everything we have experienced on this short trip, we know our guys will enjoy a first-class experience, something that they came to Charlotte and I am thrilled they will get because they are trailblazers for our programme. We know it's an unbelievable test but we take a lot of pride in being able to give our student athletes a first-class experience as well."

This will be the first meeting between Buffalo and Charlotte. Conference USA leads the all-time Makers Wanted Bahamas Bowl series 3-2 over the MAC.

Buffalo also finished 7-5 overall, 5-3 in the Mid-American Conference, and are led by head coach Lance Leipold.

"Just based on our short time here with the people of the Bahamas we can tell that our student athletes will have the experience of a lifetime," he said.

"Interacting with the people at Atlantis, at the stadium, I can't wait to get back to let our programme know about the experience they are going to have.

"To see how welcoming and accommodating everyone is, just wanting to make this special is truly something our players will take with them for the rest of their lives."

"We're about providing first class experiences for our student athletes and I think this is a fantastic opportunity for them to come down and enjoy the quality of the venue, quality of the hospitality and have an experience to remember for a lifetime," said Mark Alnutt, Buffalo's director of athletics. "It puts our institution in a great light and you can tell our student athletes are very fired up for this experience."

The game will be televised on ESPN and broadcast on the Makers Wanted Bahamas Bowl Radio Network as both teams vie for the Prime Minister's Trophy.

The Makers Wanted Bahamas Bowl is the longest-running international bowl game in college football history and, in 2019, the game is the opening contest of the bowl season during college football's 150th anniversary celebration.

"Both schools had very successful seasons, and we are very excited about the matchup of the Bulls and 49ers on December 20. We know everyone involved with Buffalo and Charlotte will have a wonderful experience during bowl week in the Bahamas and at the Atlantis Bahamas resort."

The game will be sponsored for the second year by Elk Grove Village, Illinois, using its business slogan - Makers Wanted. The Makers Wanted tagline serves as a call-to-action for Elk Grove Village's thriving community and the thousands of businesses that are based there. It is home to the largest contiguous industrial park in the United States, featuring six square miles and 62 million square feet of inventory.

For more information on the 2019 Makers Wanted Bahamas Bowl, visit MakersWantedBahamasBowl.com. The game is one of 16 postseason bowl games owned and operated by ESPN Events, a division of ESPN.