Diane Phillips: It All Starts With A Simple Idea

Who among us hasn’t at one moment or another thought, “If only I were younger” or “If only I had more financial backing, I could do such-and-such” or “Why doesn’t someone create a business to do (xyz)?”

We dream about doing something else not necessarily because we want to give up what we are doing or even that we don’t like it. We ponder other options because we experience a momentary flash of biz brilliance that identifies a need. We see a gap and say “if only”. Some of those unmet needs for products and services may seem mundane, others complex. The best ideas become legendary success stories because they were identified before the public even knew it needed it. Think Facebook, Uber, Airbnb.

So, on a beautiful weekend morning, when I should have been swimming, walking or gardening, I challenged myself instead to sit still and focus on business ideas for The Bahamas. I pledged to drive away distractions like jumping up to change the load of laundry, plan what I am going to make for dinner or weigh whether the dog really needs a bath this Sunday. Here go five ideas:

You’ve gone to a function at a hotel where you had to valet park your car. So did 500 other people. It wasn’t a problem when you got there because you left your keys, went in and your car got parked in your absence. But when the function ends and 500 people come pouring out at the same time, big problem. Now you are waiting for your car for so long you are kicking yourself for ever agreeing to attend the function in the first place. Here’s where the rent-a-valet service kicks in. The hotel doesn’t need six or 10 extra drivers every day but they do on special occasions. So they call in the valet parking service which earns its money independently through customers. Owner of the pool of drivers ensures that every driver is licenced and carries insurance. The hotel is liability-free and there is no extra cost to consumer. Rent-a-valet pool also works for parties and fund-raisers at homes, meeting places and clubs when an extraordinary parking situation arises.

Traffic in Nassau driving you crazy? Do you sit on West Bay Street trying to get to Saunders Beach roundabout or on Eastern Road approaching Sans Souci and vow never to leave work or home at that hour again? Suppose there were a ferry service available that zipped you to your office or destination and the ride was sheer pleasure? The harbour is Nassau’s natural highway and the Jackson Burnside study of historic Nassau 20 years ago identified five areas that would serve as parking depots. Maybe the idea makes too much common sense or maybe 20 years is just too short a time to make the sensible thing happen.

Grandma’s buffet need a little refinishing? Real wood floor need sanding and buffing? Good luck finding anyone with that skill in The Bahamas. Something for BTVI to consider. Small investment for the right person who would rather see a 100-year-old handmade bureau brought back to life than traded for a pressboard wannabe. And all those old wooden floors and no one to show them any love. Great one-person biz.

– Merchandising – that is, how goods are displayed in a store – is an art form, but while we have thousands of retail stores, only a handful of people in the country really know how best to display goods or create windows that inspire and invite. Those who do are very good, but most shops rely on someone who works there to also “fix up the shelves” or “put some stuff in the window for the season”. The field is wide open for young, creative talent who want to study and intern. It’s a name-your-price skill.

Candace finds some stories worth hearing

It’s not often that someone goes searching for folks over 80 to tell their story, but that’s exactly what a woman named Candace Brown did. Candace, one of the unsung heroes of the Fox Hill community, wanted to honour those in the community she believed were heroes while they were still alive and able to share a few words of wisdom. She set about interviewing 12 and compiling a calendar which she called Patriarchs and Matriarchs of Fox Hill 2019-2020 calendar.

The fact that it runs mid-year to mid-year is an indication of the challenge of conducting the interviews, a fact she confesses to in the introduction. “I had Mr Johnson up and out of bed and also Ms Roker. I interviewed Ms Burnside while she was still in bed and Mrs Rahming-Smith just as she had gone to bed. I interrupted Mrs Mackey-Moss while she was cooking lunch and questioned Mr Wells as I gave him a ride downtown.”

And those were the easy ones. From Mrs Winfred Mackey-Moss’s memories of an Eleuthera childhood having to “mash the rock to make the road” so a truck could get the tomatoes they grew to market to Roderick Wells having once been awarded a Mother’s Day plaque for “his tireless efforts of care toward his eldest son, who is disabled,” the calendar is a reflection of years when honesty, hard work and devotion to family were the cornerstones of life, helping to build an historic community that Fox Hillians to this day speak of with reverence. 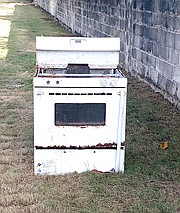 Who is the culprit?

Did someone say dinner was burned and had to be tossed out? Did they really mean to chuck the stove along with the roast? In this era when there is so much awareness of the importance and value of a clean environment, we’d love to trace the culprit who deposited this rusty kitchen appliance along an otherwise scenic route on the east side of Yamacraw Hill Road?

And to add another layer of tragedy to this image, in the days of slavery, true outdoor kitchens were housed in a building away from the great house and equipped with a fireplace and brick oven, keeping the heat and the aroma of cooking contained to an outdoor area. A few remain in The Bahamas, including at Clifton Heritage Park and at the old Farquharson plantation in San Salvador.