US warns Bahamas to be careful of China 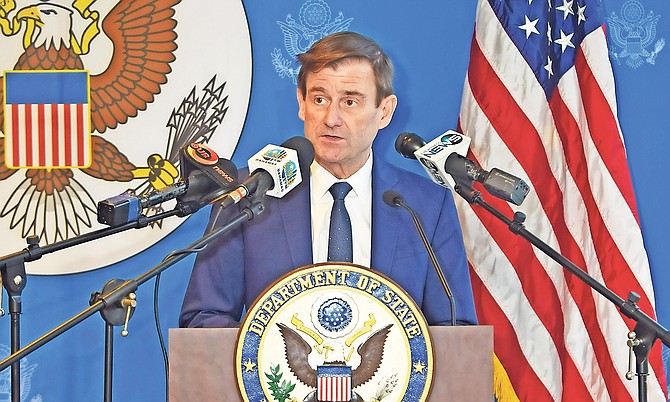 WHILE the United States supports the partnership between The Bahamas and China, US Under Secretary for Political Affairs David Hale has encouraged the government to "review the financing terms carefully" of any Chinese assistance offered.

Mr Hale said the US wants to have a robust trade and economic relationship that benefits both China and the United States.

"But, we encourage our partners at all times to review the financing terms with Chinese companies carefully to ensure that all deals and contracts in case of The Bahamas in fact serve the interest and needs of the Bahamian people, transparency and accountability I think are key principles in that regard."

It is not the first time US officials have warned local officials about China's influence. In September, US Senator Marco Rubio wrote in an opinion piece in The Miami Herald that argued the US cannot allow China to exploit this country's recovery and rebuilding after Hurricane Dorian for its own nefarious purposes and gain "a foothold just 50 miles from the coast of Florida".

Mr Hale spoke to reporters at a press conference yesterday. He was in the country to meet with government officials, including Prime Minister Dr Hubert Minnis, to discuss the US' emergency response after Hurricane Dorian and continued support.

When asked if the US would consider granting American citizenship to Bahamians displaced after the storm, Mr Hale said their focus is to help the Bahamian government rebuild and reconstruct The Bahamas so that Bahamian storm victims can "restore their lives with dignity and restore their prosperity."

He was also asked to weigh in on the situation facing undocumented Haitian migrants, many of whom were left displaced after shanty towns on Abaco were destroyed by Dorian. After a short reprieve, the Minnis administration resumed repatriation exercises to Haiti and has said storm victims would not be exempt from the law.

When asked to weigh in, Mr Hale said: "The United States and the Trump administration of course is focused as well and so we sympathise with any country dealing with the consequences of irregular migration.

"So, we know that this is a concern here and it's important that whatever is done is in accordance with international norms.

"I'll be going to Port-au-Prince tomorrow and I will describe what I learned when I was here in The Bahamas and encourage that kind of supportive work together."

Mr Hale said the US is proud to be a close neighbour of The Bahamas and will continue to offer its support.

"We are proud to be close geographic neighbours and strategic partners with common perspectives on a range of issues," he said. "Today I felt warmly welcomed by the prime minister and the minister for national security who is acting minister for foreign affairs. I assured them of America's support (of) the people and the government of The Bahamas as you continue to recover after the devastating effects of Hurricane Dorian.

"As a component of our support I just concluded meeting that many hard-working women and men who are implementing our assistance. America has provided these implementing partners over $34m USAID to help meet the humanitarian needs throughout the country."

He continued: "They outlined the work they are doing to assist efforts related to shelter, health care, logistics, water and sanitation on Grand Bahama, Abaco and New Providence. Most of these partners will continue their work in the areas most affected by the storm well into 2020. As The Bahamas moves into the reconstruction phase, we are committed to helping galvanise the immense generosity of the US private sector.

"The commitments of the prime minister, minister of national security are partners at the Ministry for Disaster Preparedness, Management and Reconstruction and my colleagues at the American Embassy reflect the enduring partnership to America and The Bahamas. We will continue to work together for the shared prosperity and security of our two countries."

The Chinese have already unquestionably established with the Sarkis Izmarillian Baha Mar fiasco that they are as trustworthy as rattlesnakes.

Successive governments of the Bahamas have NEVER served or had the interest and needs of the Bahamian people at heart, transparency, and accountability is just another bad joke politicians "talk" about as opposition parties and buries immediately upon gaining power.

The only "key principles" the PLP and FNM have are collaborative corruption and self-service!

Meanwhile, they failed to educate our people, then labeled the people as "D" average dummies as justification to give all their jobs to Haitians, Filipinos, and Latinos.

Our country will never progress with PLP or FNM leadership. Expecting them to rescue us from the failed position " they lead us to", is like trying to extinguish a fire by throwing gas on it!

China functions under a 1000 year plan, their people are as fodder to be consumed by that plan. With us they are dealing with people that Do not think past lunch. Think about that, and realize, they have their hooks in our leadership, both parties. Quick fixes, loans, a cheap sell out. Sovereignty is an illusion.

Perhaps too late? Do we know what collateral has been used to guarantee the loans? Loans that we are quite sure will end up in default.

What's wrong with being smart and insightful given that we, as a country, have perpetuated and promoted illiteracy as a way of life for our citizens? Isn't that what we ought to encourage our children to be (smart and insightful)?

If your enemy slaps you on one cheek, turn to him the other as well. Rather than be afraid of the Chinese, let us do better than the USA. Let us study and learn from them.

Though we are an island nation, we can surmount to high heights. Italy is an island nation too, yet Rome once ruled the world. Any country that appears to be pulling itself up out of the muck, the USA will oppose it, i.e. Iran..

He may be right about whether the US will or wont help a country pull up out of the muck - but us joining with the Chinese is not pulling up - it is a nail in the coffin.
The only viable solution for the Bahamas is to become the 51st state. We are too small in population and our islands too far apart for us to govern ourselves. I dont know if the majority want to wait another 46 years to realize that? The dude was here. PM should have asked him to make us a state and Minnis would be governor. Oh well. Lost opportunity. Probably the best inscription for our gravestones: "Lost Opportunity".

You...you think Italy is an island?

I Second “Mudda” on that! The United States (with Donald Trump as President) was there for us like no other Nation in our time of greatest despair ... “ever” ... in the history of The Bahamas ... let no Bahamian EVER forget such generous assistance for which will be forever grateful.