Woodland Leads As Tiger Gets Within Two Shots 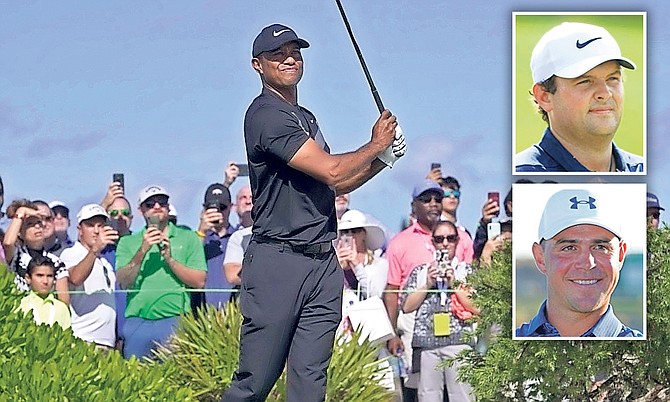 NASSAU, Bahamas (AP) — Two big birdies from Gary Woodland gave him the lead in the Hero World Challenge. A closing birdie on a hole that has vexed Tiger Woods put him in range of a third victory this year.

Patrick Reed fully expected to be right there until watching video of his club moving sand away from his golf ball in a waste area, leading to a two-shot penalty in a round that didn't go all that well in the first place.

The end of an entertaining round Friday in this holiday event in the tropics set up what figures to be a lively conclusion. Woodland's final two birdies gave him a 4-under 68 and a one-shot lead over Henrik Stenson.

That includes Woods, who hasn't won his event since it was in California in 2011. With one eye on being a playing captain at the Presidents Cup next week in Australia, Woods focused on birdies instead of potential pairings at Royal Melbourne and was two shots off the lead.

The final round is Saturday, so the American team — 11 are in the tournament, Dustin Johnson is coming to the Bahamas to join them on the charter — can get an early start across the globe.

"I just have to focus on going out there and making birdies," Woods said. "And then I have 23 hours on a plane to recover."

Woodland makes his Presidents Cup debut next week, and he appears to be in good form. He dropped only one shot, gave another way by failing to birdie the par-5 15th, and then finished in style. First, he holed a 30-foot putt on the par-3 17th. Then, with the wind at his back, he hit wedge to 3 feet for another birdie.

On Thursday, he ended his round with three straight birdies.

"It was a nice finish, same as yesterday," he said. "So excited about where I'm at and I look forward to tomorrow."

The next two weeks cap off a memorable year for Woodland, who won his first major at Pebble Beach in the U.S. Open, and then his wife had twins. This is the first time traveling with the entire family — three kids under 2 — and they couldn't fit all the car seats and strollers on the plane.

It was a forgettable day for Reed in so many ways.

Staked to a three-shot lead, he didn't make a birdie until the 14th hole, a short par 4 that can be reached off the tee. He added two more down the stretch, only to lose two strokes in the scoring room.

Reed was in a sandy waste area left of the fairway on the par-5 11th when video clearly caught his sand wedge removing sand right behind the ball — twice — during practice swings.

That's a violation of Rule 8.1a (4) on removing or pressing down sand or loose soil.

Reed says the club was farther away from the ball than it looked on television, and he said with the face being open, he didn't realize the club had brushed away sand because "I didn't feel it drag."

"So after seeing the video, it's a two-stroke penalty. I accept that," Reed said.

He's still very much in the picture after his 74, three shots behind with only five players in front of him after a day feeling as though nothing was going in the hole.

It's an All-Star cast in front of Reed, and chasing Woodland.

Stenson is trying to end 49 starts worldwide without a victory as he tries to get his swing back to when he was at his best. The 43-year-old Swede shot 68 despite chip shots dropping into the wrong cup — a sprinkler head — on consecutive holes. He will be in the last group with Woodland.

Justin Thomas, who has never had a higher score when playing alongside Woods, kept that streak alive. They each shot 67 and will play together again in the final round. Defending champion Jon Rahm had a 69 and was two shots back.

Thomas has become close with Woods, and they are a likely pairing next week in the Presidents Cup. Thomas was particularly artful around the greens with a full flop shot on the ninth, and a 5-wood to putt it up the slope for a tap-in birdie on the par-5 third.

"Look at that short game," Woods said. "Just go around and look at the shots he hit today. The kid's got great touch."

That will come in handy at Royal Melbourne next week. For now, they're all playing for themselves and a $1 million check.