The medical blunders which cost Elizabeth Dupuch-Carron her son 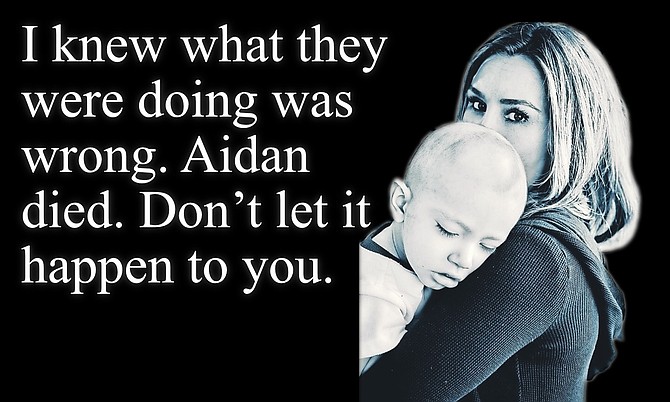 MY name is Elizabeth, but my friends and family call me “Lizzy” and for two years a little man by the name of Aidan Roger Dupuch-Carron, called me “mum”.

Like so many of you, I am a lot of things, daughter, sister, wife, friend, but under no circumstances am I an “anti-vaxer”, indeed our son’s tragic journey and ultimate death was because both my husband and I were and remain to this day firm believers that vaccinations are an essential part of a baby’s well being and to this end we, as “responsible” parents, were committed to following all vaccination schedules.

Our story has nothing to do with whether or not vaccines are a good idea because they are. It is about the “medical protocols” that in our baby’s case, and who knows how many other cases, were not followed when it came to the administration of these life saving vaccines.

This is about questioning medical practitioners and others operating in the field and holding them accountable.

It is about questioning how vigilant the nursing staff is with regards to reading and following instructions before administering vaccines to infants.

Why would our paediatrician, Dr Lochan, tell us casually that although he currently did not have the DTaP vaccine available at his practice for Aidan’s 2 and 4 months vaccination schedules – the one Aidan needed to complete his inoculation series – we could, if we wanted to, go to a Ministry of Health clinic where he would be given the old version of the vaccine called DTP which had been discontinued in the US years before. However, he was also clear to inform us that he would advise against doing so because of the adverse risks associated with this vaccine and in fact he did not, nor would he ever carry it in his practice…. I’m troubled by this and so should you be

Today my husband Robert Dupuch- Carron, former Deputy Chairman of the Public Hospitals Authority & Emergency Management Services, says we should be concerned about the vaccine he discovered Aidan was given - GlaxoSmithKline’s Infanrix Hexa 6-in-1 combination vaccine.

This literally means what it says - six different elements in one combined shot injected into your baby to protect against six different life-threatening diseases along with another shot and the administration of a live oral virus at a single visit to any paediatrician’s office.

Robert says it should also be noted Infanrix Hexa had not been licensed nor approved for use in infants or children in The Bahamas or the United States of America and infact FDA approval was only granted only a few weeks ago. This was because of concerns over the increased risk of adverse reactions disclosed by GlaxoSmithKline when it sought approval for the vaccine from European regulators.

In point of fact the Labelling and Package Leaflet provided by medical staff administering Infanrix Hexa points physicians to be aware of adverse reactions when the vaccine is used alongside other agents and in combination with other vaccinations on a schedule not approved for such.

While he is a strong supporter of vaccinations Robert believes the use of Infanrix Hexa alongside certain other drugs - and outside recommended protocols - should be stopped.

This is about questioning what seems to be the common practice of playing “catch up” with immunisations when “the established protocol to follow when an entire series of vaccinations cannot be completed is that the series should be started all over again with the required intervals between each shot. Instead of the missing shots being administered all at once.” This is what my husband was told by an astonished paediatrician at the world renowned Johns Hopkins Hospital in Baltimore when we told him that our nightmare began because we had taken our son to “catch up” on some missing inoculations. We were assured that this was “fine, we are catching up…” – these were the dismissive words spoken by Nurse LaRoda at Dr Lochan’s office as she pushed the plunger into our baby’s leg.

These are the words that will haunt me for the rest of my days. Just 14 days after those words were spoken our lives would never be the same again and a year and a half later our beloved Aidan would be dead.

This is about holding a medical system that appears to play fast and loose with the most vulnerable in our society – our babies – accountable. On that tragic day, Thursday, June 23, 2016, when Nurse LaRoda administered all of Aidan’s six-month vaccinations in ONE session, (vaccinations that included: DTaP, HepB, Prevnar, IPV and Rotavirus) someone in that office should have known that this was not the correct procedure.

Our anguish was only compounded by the fact that a few weeks after our beloved Aidan took his last breath my husband came across his immunisation record. We could not believe our eyes.

Someone at Dr Lochan’s office correctly signed off on our visit of June 23, 2016 recording Aidan’s height, weight and head circumference as well as the administration of the DTaP. But at the same time – June 23 – and on the same card, and with the same signature it was recorded that we had returned on June 26 — three days later — for the remainder of his vaccinations. This was not true. There was no need to return because all of his vaccines had been administered on June 23! This card – with both dates, June 23 and 26 – was given back to me on June 23. Without examining it, I put it in Aidan’s diapers bag, and, until my husband found it after our son’s death never looked at it again.

Our next visit to Dr Lochan’s office was in fact 14 days later after Aidan had developed a fever and was treated with Tylenol and Ibuprofen for a suspected viral infection. We were never in his office on June 26, although the signed card from his clinic said that we were!

At the risk of getting a little ahead of myself I will point out at this stage that both Dr Maggie Fader, Haematology-Oncologist at Nicklaus Children’s Hospital, and Dr Patrick A. Brown, Associate Professor of Oncology and Paediatrics at John’s Hopkins, both concluded that without a doubt Aidan’s Secondary HLH was “triggered by one or more of the vaccines he received on June 23, 2016”. But more on this later.

I am sharing with you our personal story, Aidan’s story, so that our son’s suffering and death will not have been in vain. We want you, as parents in the Bahamas, to know what we have gone through so that you are empowered to hold your medical practitioner to task. You have the right to ask questions, do not let a white coat, a diploma proudly mounted on a wall or a nurse’s uniform intimidate you from asking questions, because in spite of all their accomplishments at the end of the day they are human and they make mistakes! Do not be afraid to ask your doctor about the risks involved in administering the vaccines –indeed the Doctor should tell you without asking: How the drug that they are injecting into your baby’s body was brought into the Bahamas? Where was it manufactured? What is the expiration date? How is it being stored once it is at the clinic? Most, if not all vaccines should be refrigerated. Ask if there is a generator on site to keep refrigerated medications from going bad.

There are no silly questions when it comes to the wellbeing of your baby, so ask and if you, as a parent are not satisfied, if you have a gut feeling that something is just not right, please, do what I was not able to do when I saw that syringe go into my baby’s thigh and my mother’s instinct told me that there were too many shots being given to him all at once, when every cell in my body was screaming at me that I should grab my baby and go. But I didn’t.

Why? Because I had already expressed my concerns to Nurse LaRoda before she gave my infant son the shots. I told her that I was uncomfortable, that my instincts were screaming against giving all the vaccines at once, he wasn’t used to having the DTaP with his other vaccines, he had his first DTaP vaccine (alone) many weeks after his 2 months vaccination schedule, and again (alone) 2 weeks or so after his 4 months makeup vaccination schedule, hence his vaccines were moved forward a month, to me it was common sense. I was so concerned I asked her to leave the DTaP vaccine out. We can come back in a week or so, I told her. I was dismissed. Nurse LaRoda aggressively expressed herself, her words were – “It’s fine, we are catching up...”

However instead of listening to my instincts and taking my baby and running...I didn’t want to appear rude by questioning the knowledge of a medical professional, because I didn’t want to seem like an overreacting first-time mother. Yes, it was that mind set that glued me to the chair that fateful day, but it was a broken medical system that cost us our Aidan, so it is in his memory that I tell you to empower yourself for your baby’s sake, if something feels off, if a doctor or nurse brushes your questions or concerns aside and fails to answer any or all of your questions….LEAVE!