Minnis: Protect The Poor And Marginalised 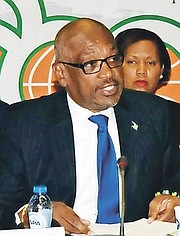 AMID the cost of living increasing in the country, Prime Minister Dr Hubert Minnis said his policy is in place to “protect the poor and marginalised”.

His comments on Friday came after he was asked about an assessment released by the Department of Statistics that revealed the Customer Price Index (CPI) had increased in September.

Speaking to reporters on the sidelines of the Bahamas Hotel and Tourism Association annual general meeting, Dr Minnis said his government is doing everything it can to protect the poor.

He said: “We feel that the wealthy, the rich individuals, regardless of the outcome, they would be able to survive and protect themselves. And we would still need them to help generate jobs, employment…

The Department of Statistics released data that suggested the CPI has increased to 108.81 in September of this year.

The highest affected areas were transportation, furniture and household equipment, healthcare, restaurants and hotels, tobacco and narcotics, and alcoholic beverages.

Despite the tax breaks implemented by the government in the 2019/2020 budget, the CPI increased.

Recently, Minister of Works Desmond Bannister said Bahamas Power and Light customers will see a $20 to $30 increase in their monthly electricity bills for 10 months starting in 2020.

While debating the Electricity Rate Reduction Bond Bill in the House of Assembly at the time, Mr Bannister said that the issuance of the bonds will be used to refinance BPL’s $321m debt to pay for phase two of the new Wartsila power plant and manage other liabilities.

“We expect that the issuance of the rate reduction bonds will lead to a temporary increase in the average household billing of an average of $20 to $30 monthly for about 10 months in 2020,” he told Parliament. “The good news is that this will be a short-term increase that will be wiped out in 2021 when the cost of generation will decrease drastically due to the completed installation of the second station consisting of even more new fuel efficient engines, better operation performance, and lower fuel costs brought on by the utilisation of Shell’s internationally respected hedging expertise.”

The Carmichael MP explained that the Rate Reduction Bond Act passed under the former Christie administration mandated officials to increase electricity bills at that time in order to properly finance BPL. Instead of doing that, Mr Bannister accused the Progressive Liberal Party of bypassing the increase and hiring 166 people at BPL which caused overstaffing.

I can warn you, precedent in my own country. When politicians start talking about the poor this, the poor that. It's a bad sign. Its the start of pandering and divide and conquer. You will quickly find the poor are not those lacking in dollars, but those colonised with the mindset that, because of, " di foriner, di white man, di big man, slavery, dose damn ashyans, di boast yardys", they are disenfranchised and held back?

Issues like taking advantage of school, training, avoiding sex as sport and breeding children they can't afford will not be highlighted. "Cause we a poor people and boyyyy dii Govanment must two care a we"..

Minnis said: “We feel that the wealthy, the rich individuals, regardless of the outcome, they would be able to survive and protect themselves. And we would still need them to help generate jobs, employment…

These are the words of a self-confessed corrupt communist who, because of his warped mindset, incomptence and inability to govern, must resort to redistributing the wealth of others, except of course the corrupt political elite and their equally corrupt cronies.

The corrupt Minnis-led FNM government has failed to introduce and implement policies for the creation of well-paying private sector jobs that would create new wealth for all Bahamians to enjoy and share in. Instead, Tweedle Dumb Minnis and Tweedle Dee Turnquest only know how to rob Peter to give to Paul in an effort to "buy" votes as they themselves go about "selling" the best that the Bahamas has to offer to foreign interests by way of non-transparent back-room deals.

wow, you just summed up the last 3 years

Poor fiscal policies by this FNM government has caused the cost of living to increase so dramatically. Three former cabinet ministers in the Ingraham cabinet basically said so.Also a journalist linked to former cabinet minister in the Ingraham goverment basically predicted this may happen.They have created on their own accord ,some fiscal and monetary problems, Some of these problems,they may not be able to solve. Economics is a very complex subject.It is not as simple as Turnquest and Johnson believe.

So basically Minnis is saying the Minnis is saying the government will help the poor and marginalized with run-a-way inflation and the increasing cost of living in The Bahamas. But the rich and wealthy can take care of themselves. But as the rich and wealthy, even moderately so, have to dig deeper in their pockets to survive, the less likely they will be willing ti invest and create jobs. As long as the economy remains broken and unfixed, the cost of living will continue to skyrocket. And as the government tends to lean more and more on the affluent to assist the poor, the economy will continue to shrink. Poor people, most, want to be independent of charity and have the opportunity to earn a living themselves. They want the government to create more jobs and give them the opportunity to work and earn a decent living.

doc has to be the biggest liar on God's green earth or he believes the Bahamian people are fools. So far everything he has done has hurt poor people. 60% in VAT. was a nail in the coffin for the poor. he has taxed the poor in every way he can. Thirty dollars extra for power. and the wash house man has a $2.00 tax at the Air port.

Doc will be going to Bains Town soon in his electric blue pants and cow bells to cut a cake and try to fool the people.

Doc has made the rich, richer and he has destroyed the middle class.

Banister the mealy mouth blame guy. the fatal accident with the poor signage some one else fault. Ms. Osmond make up lie. and Banister how is Government house coming along. $9,000 Per month saving there. and Ragged Island what about that?

And talking about PLP hiring . What about the folks from G.B that come about on your watch?

The BPL scandal could have been cleaned up in a more efficient manner where the amount of money borrowed was much less and the burden on the Bahamian people less burdensome. BPL is a single monopoly with a growing customer base and should never find itself in a position where it is losing Minnetonka consistently or with all its equipment obsolete and unreliable. But that is what the Kissinger Report says you should do when you want to take over a country. Control their power supply, their food supply and their communications. What only country has been trying to take control of these assets in the Bahamas?

Minnis says whatever is politically expedient even of it makes no sense.

We have to raise VAT or we'll end up like Haiti. Now he ready to raise VAT again, and you know they discuss it, because we still on the road to Haitiism. He also seems incapable of dealing with complexity. Early in the administration when being pressed by reporters for an answer to some local issue (can't recall) he said he's not dealing with that he has to go make some boil fish. At another time he was only concerned with christmas presents fir the children. At another time he said he's not dealing with X hes only concerned with young people 18-35 who are unemployed. After Dorian he was only concerned with people from Abaco and Grand Bahama.

This is a HARD job, I can't do it. So I een running. If you can't, don't offer yourself either. It's alot of complex issues balancing fiscal management with social considerations in a rapidly changing environment, long hours, a thankless public and colleagues ready to throw you under the bus at the first sign of trouble. You have young people issues, old people issues, middle age people issues, crime, education, immigration, diplomacy, national disaster management, health concerns, a system ready to explode at any minute with a steady stream of possible infection from the south and a tide of non comminicable diseases, child abuse, physical abuse, unemployment.

This is not a photo op, it's not about driving in a red plate with a country flag and out riders, it's not about adding an accomplishment to your bio, it's not about the people you meet..Dorian seemed to turn into a BIS story on who the PM talked to on the phone,. This job is none of that poofy stuff. if you can't handle it don't take the job, the survival of 400,000 people depend on your competence. And the one thing not demonstrated in the last 3 years is competence

"So, regardless of what happened, policies will be there to ensure their protection." WHICH INCLUDES...?

The real problem is he is not interested in learning anything about economics and prior planning before catastrophe from people like the Nassau Institute and the Chamber of Commerce (and of course my good self).

We know he is not interested in learning from anyone, because the MOF keeps all of the financial figures well hidden, so they cannot be analyzed.

It's a boat moving full steam ahead, without a compass.

We should have been suspicious when he said he wasn't giving himself a portfolio. Since everything explodes before he addresses it, he's certainly not performing any oversight. So what is he doing? ....I see him quite often in pictures attending Regatta.

Exactly. The FNM is now in the same situation the PLP was in in mid-2015 when everyone told them to replace Perry but they wouldnt listen. The FNM needs to hurry up and choose Carl Bethel as PM or they will have 4 seats reserved for them in the new House.