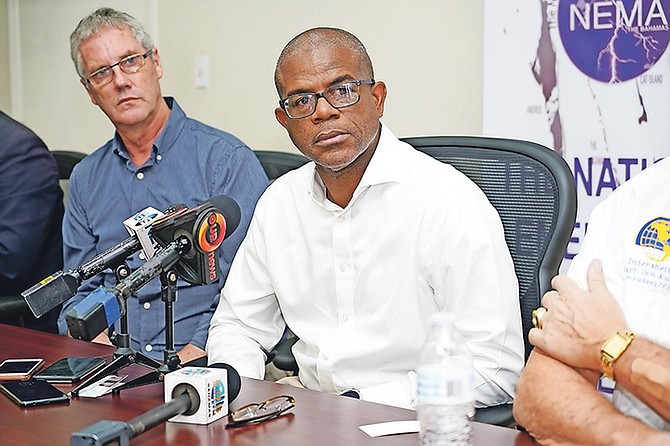 WITH 14 of the government’s 250 dome structures expected to be completed by Friday, Chairman of the Disaster and Reconstruction Committee John-Michael Clarke said yesterday the government is still in the process of determining who will be allowed to live in those domes.

“I can say that the Department of Social Services does have a list of persons that may qualify for these temporary housing …and the authority is vetting that list…so it’s just a matter of assigning priorities and making sure we can contact those persons and the domes are available for them,” he told reporters during a press conference at the National Emergency Management Agency’s headquarters yesterday.

“We will be meeting with the Department of Social Services this week because once the contractors have the domes erected, we can begin what we intended to do and that is get persons back on the island of  Abaco repairing their properties and living in a comfortable space.”

But, in the meantime, Mr Clarke said people who want to live in these domes should register with the Ministry of Social Services.

“We’ve gotten inquiries and I know in Abaco, they are taking names at the NEMA office at the government complex, in Grand Bahama not so much,” he added.

“But we will be actively and aggressively engaging social services to get the proper applications information out. (And) applications for the domes can be made through the Department of Social Services.”

To date, there are currently 497 people living in shelters in New Providence, with 380 in Kendal Isaacs Gym and 117 in Bahamas Academy Gym, according to the Department of Social services.

A model of the Family Relief Centre’s dome structure that will include plumbing, drainage, a sewer system, and electricity. Photos: Shawn Hanna/Tribune Staff

But, last month, Social Services Minister Frankie Campbell revealed the government is hoping to have those shelters deactivated before the holidays.

It is still unclear, however, where shelter victims will be sent once remaining shelters are deactivated.

Speaking on the matter yesterday, Mr Clarke said: “We’re not going to put anyone outside, but we want to make sure that we have a reasonable and working solution both for the shelterees here in New Providence and for those who want to move back for Abaco..that’s one of the reasons why we want to engage social services this week to determine and look at what our original targets are and to determine what modifications needs to be made to those original targets so that we could accommodate the shelterees.”

Mr Clarke told The Tribune last week that the first 40 dome structures in Abaco will be open to displaced families “before” or by early January in Spring City.

The remaining domes, he said, will be completed by March 2020.

But, speaking at yesterday’s press conference, contractor at Brickell Management Group Philip Robinson said he is hoping to have the domes completed before the deadline, adding that the first dome structure in the Spring City was erected last weekend.

“My intention is to have 14 up by Friday… and with each dome, (it) will be fitted out with a bathroom. The bathroom will consist of a shower, sink and a toilet part and the rest of the space will be left open for the inhabitants to take over from there,” he continued.

“But our intention is to have 110 domes this side of Christmas on the island and the remainder to be on the island by the end of January. We are working through the Christmas period to keep moving forward.”

CEO of InterShelter Inc, Captain Don Kubley, manufacturer of the domes, also spoke about the many benefits of the structures during the press conference.

“They’re hurricane proof and they’re comfortable. One of the great things about them for transitional housing after a disaster like (Dorian) is you can stay and put one in front of their home and they can have a nice comfortable, warm safe place to be until their home is rebuilt.”

The $6.4m temporary dome city in Abaco is expected to accommodate about 1,000 people for two years.

In October, Mr Clarke said the government was considering charging dome city tenants a “nominal” fee for rent after the expiration of a free period.

When asked if persons will still be charged to live in the domes, he replied: “To be honest, we’re still working out some of the protocols where the entire length of stay will be free.

“At some point, you would have been heard that there was going to be a charge. None of those things as a matter of policy have been confirmed, but prior to anyone taking up residence in any of the temporary shelters, all those details would be ironed out.”

$6,400,000 divided by $15,000 per residence in the impacted communities works out to 426 roofs repaired. I'd guess that would be pretty close to the number of structures that are a) owned by bahamians citizens and b) is in need of major work. Why not just purchase $6.4M worth of roofing supplies and distribute to the people. And why not you ask, well how is someone going to profit off of erecting 250 overpriced tents if you just give away free roofing materials instead? $15,000 is a ball park number to purchase materials for a basig but proper roof on a typical bahamian duplex struture. bahamians can always get their brother/cousin/uncel to come help put it on. Am I Wrong? I"m probably not thinking striaght. 100 days and counting and i still don't have any garbage collection at my house in Marsh Harbour. The streets are littered with junk, 1 out of 10 pieces of heavy machinery is moving around the dump. private heavy equipment operators are price gouging. Anyone in Nassau with Heavy Equipment want to send it up here to get put to work?

If the domes go up faster then many tents why has it taken so long to put up? I can put a tent up in a couple of minutes and i was never a boy scout. Me thinks the guy is stretching the ease of these domes a bit

they were waiting for winter. Those IGLOOS are built for North/South Pole sub zero weather

But, speaking at yesterday’s press conference, contractor at Brickell Management Group Philip Robinson said he is hoping to have the domes completed before the deadline, adding that the first dome structure in the Spring City was erected last weekend.

Finally an admission that the very corrupt and racketeering numbers boss (thug) Sebas Bastian, who controls the Brickell Management Group, is behind the "Ville du Dome" venture as it is known in northern Haiti. And yes, the Domes alone may cost $6.4 million but what about the many many millions of dollars more that are being spent (literally squandered) to erect them and provide them with electricity and running potable water. What a massive fraud and flaming charade all of this foolishness is. Yes indeed, Tweedle Dumb Minnis and Tweedle Dee Turnquest are about as corrupt as corrupt can be. Much like their favoured crony and thug, Sebas Bastian.

Persons known to be closely associated with the Brickell Management Group and who have served and may still be serving on its board of directors include Sebastian Bastian, Paul Major, Keith Major, Wesley Bastian, Alfred Sears, Ed Fields, Felix Stubbs, Leon Williams and Cassius Stuart. What a joke!

When I saw Brickell...I thought the same perhaps you are on to something!

Excerpt quoted immediately below is from an article written by Neil Hartnell that appeared in yesterday's edition (the Dec. 9, 2019 edition) of The Tribune:

An Island Luck co-founder is urging the New York federal courts to dismiss the US government's near decade-old human smuggling charges against him because his "rights" are being violated.

Adrian Fox, who teamed with Sebas Bastian to create The Bahamas' largest web shop by market share, is arguing that the charges should be thrown out because the US government's failure to launch extradition proceedings against him has breached his "right to a speedy trial".

The US, though, is resisting Mr Fox's dismissal bid on the basis that this was only launched when his efforts to negotiate a "deferred prosecution agreement" with the southern district of New York attorney's office stalled.

Sebas Bastian is no different than Adrian Fox. That 'ole saying that birds of a feather flock together very much applies to Sebas Bastian and all of those around him who have so willingly sold their soul to the Devil.

WHO ARE THE FOOLS?

THE ESKIMOS WHO WERE CONVINCED TO AND BOUGHT THE FRIDGE FROM THE GREAT SALESMAN, OR, THE BAHAMIANS WHO BOUGHT THE IGLOOS FROM THE ESKIMOS?

Colony's Comrade Abacoians Marsh Harbourians now have positive reason to have held onto their red shirts colours t-shirts, yeah, no .... time display your party colours loyalty t-shirt to dress-up in before heading over to the government's local office for their first pick dome residency appoint with the comrade appointee with the two perfect syllable words name, comrade John-Michael, yeah, no ... You can't make this up, you just, can't why a politically appointee with a two perfect syllable words name should be making more than the other one reportedly said be making $150,000, plus bonuses and other expense privileges, with only a single syllable word in her christian name