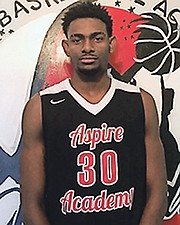 SHAVAUL Butters is putting up impressive numbers and is garnering attention from scouts for his play on the prep circuit.

The former St George's Jaguar has made a seamless transition continuing his high school career with the Aspire Basketball Academy Wizards in Louisville, Kentucky.

The 6'7" forward is in his first year with the programme and has made an immediate impact, averaging a double double through the first quarter of the season. He became the second Jaguar within the last three years to attend the Aspire programme following Ahmard Harvey who is currently in his freshman season with the Coastal Carolina Chanticleers.

Aspire Academy is a residential, basketball-centred college preparatory programme and training institute on the campus of Holy Cross High School in Louisville.

The Wizards have produced 20 players who have matriculated to NCAA basketball over the past three years, including 14 at the Division I level.

The basketball schedule consists of approximately 45-40 games against junior colleges, prep schools and D1 JV teams. According to its website, "The vision of Aspire Academy is to use the game of basketball as a vehicle to inspire, develop and cultivate future community leaders with the core academic and leadership skills to prepare them for life beyond Aspire."