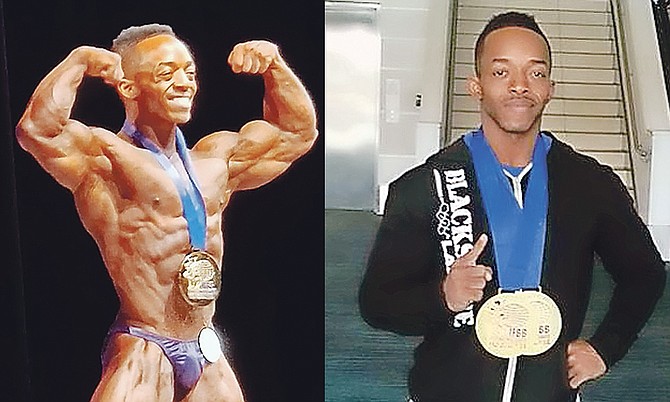 Paul ‘Mighty Mouse’ Wilson turned in another great performance, walking away with two titles at the International Federation of Bodybuilding and Fitness (IFBB) Pro League Caribbean Grand Prix Pro Qualifier in Hamilton, Bermuda, over the weekend.

Wilson, 36, picked up the Men’s Open Bodybuilding Lightweight and Men’s Classic Bodybuilding Short Class titles. He also competed for the Classic overall posedown but fell short in securing the pro card, finishing as the runner-up.

“To this day, this is my most conditioned physique, so I was very proud and I felt very accomplished doing that,” he said.

“I knew I always had the muscles and the shape, but trying to get it tight was something that I’ve battled with for a few years.

“Even though it got me some wins, there was always something within myself that I knew I could have done better with. So this year, I was able to pull everything together and brought it to the stage to win two titles.”

Despite falling short of winning the pro card, Wilson said on consultation with the head judge for Mr Olympia and the Arnold Classic, he was made aware that there are still some things for him to work on to get to the next level.

“Even if I had gotten my pro card, I would need a few more years to put on the muscle to compete at the pro level,” he pointed out. “So while I wanted the pro card right then, I am glad that I didn’t get it too.

“They told me that I had great symmetry and great conditioning and my presentation was spot on, but I will have to get much bigger. So that’s something that I will have to work on.”

As a self-coached competitor out of Better Bodies where he’s a personal trainer, Wilson said if he’s going to get to the next level, he will have to secure a sponsorship that can ensure that he gets the right ingredients for his diet and is able to have the necessary funding to travel to compete in more tournaments.

“It takes a lot of money and that’s for every athlete, not just bodybuilders,” said Wilson, a former sprinter.

“In order for you to be able to compete on the international scene, you have to have the funding because without it, one month you are left focusing on your training and the next month you are focusing on travelling.

“With the help of a corporate sponsor, it takes some of the load off you when you are training because you know that you won’t have to worry about the expenses to travel to compete in a show.”

By May, Wilson intends to be back on stage competing in his next show. Hopefully, by then, he would have been able to improve his mass and put on another spectacular showing in the new year.

Joel Stubbs, president of the Bahamas Bodybuilding and Fitness Federation, congratulated Wilson on yet another great performance.

“He’s always been competitive, no matter where he goes in the region or internationally,” Stubbs pointed out.

“He has a great structure for his category in the men’s lightweight. “So wherever he goes, I expect Paul Wilson to do very well in his category. We’re encouraging him to put on a few more pounds so that he can step it up to compete in the men’s middleweight or welterweight so that it will be better for him to secure his pro card.”

Although he came close, Stubbs, a former heavyweight who earned his pro card, said it’s very difficult for a lightweight to achieve his professional status unless he’s in exceptional shape.

“But during the posedown, he was placed next to the competitor who won the overall title and the pro card, so it was a great accomplishment for him,” Stubbs said. “So it was a very good showing for him.”

Stubbs said there have been issues with competitors competing in the IFFB Pro League by the International Federation of Bodybuilding and Fitness (IFBB), but he feels competitors should be able to follow their dreams without any stipulation.

The Bahamas has more than a dozen competitors who have achieved their pro cards, half of which are in both the IFFB and the IFBB, so they have made their choices to compete in the organisation of their choice.

Wilson, when asked if he was deterred by all of the fuss about which organisation he should compete in, said he just wants to be able to go on stage and perform at his best in whatever competition he is eligible to compete in.